Tonight at 8pm the Northwest Design Review Board will consider the latest plan for a 74-unit residential building at N 88th St and Nesbit Ave and perhaps secure the board’s blessing to move forward. This is the second recommendation meeting, meaning the board opted not to recommend in the first recommendation meeting. It’s fourth design review overall including the two early design guidance sessions. The meeting will take place at the Sunset Room of the Ballard Community Center at 6020 28th Ave NW.

The building would be a bit of a trailblazer in the Aurora-Licton Springs Urban Village that hasn’t seen a ton of large apartment buildings during our current boom. That would change with project’s 39 apartments and 35 small efficiency dwelling units (SEDUs) which are microunits in the 220 to 300 square foot range. Just three blocks from RapidRide E stops, the proposed building would feature no parking and replace a 15,400-square-foot vacant lot. The builder will also seek four-star Built Green certification indicating an environmentally sustainable project.

The DJC reports, “The basement would house bike storage, a media room, fitness room and a lounge with a bar.” The project will feature a central courtyard area, a rooftop patio, and sidewalk improvements. Architects said they hope to make the neighborhood more walkable and help shield their neighbors to the east from the noise pollution of Aurora Avenue. 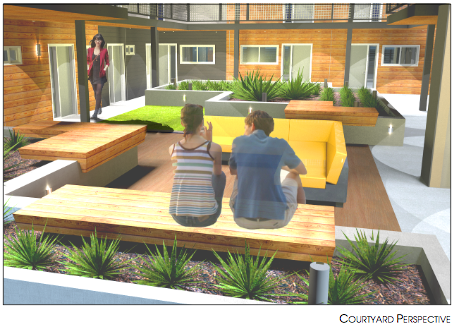 The central courtyard (as pictured to the left) would draw in natural light for inward facing rooms and also provide a quality common space with landscaping features by the looks of it.

Part of the reason the build did not secure its recommendation in its first meetings (it had its first recommendation meeting in June) appears to be architects did not include expected items such as a materials board in the design packet, which is now added. The design board also recommended using landscaping to buffer the first floor units from the public sidewalk area, a suggestion architects adopted. Architects have sought to define the first floor patio spaces as semi-private with landscaped barriers and also use window treatments to increase the sense of privacy.

The 35 micro-units would hopefully provide moderately-priced units in a city badly needing them. The Nesbit project could be the first of many projects to turn Aurora-Licton Springs into a more urban neighborhood, and perhaps put it on the map for the rest of the city that seems to associate the northern reaches along Aurora Avenue with shabby auto-oriented businesses and criminal mischief.

A block north, a mixed use warehouse, office, and 27-unit apartment building is in the works. Mixed use warehouse seems to me a first of its kind at least in modern times, but it sounds promising and a unique fit for Aurora-Licton Springs neighborhood. A handful of small efficiency projects are proposed farther north as well as a larger 7-story mixed office and 83-unit project planned at 9510 Stone Way N. This wave of projects could more clearly define the neighborhood and make it more true to its urban village designation.

The Northwest Design Board will also give early design guidance for a 82-unit mixed use building planned for 6416 15th Avenue NW at 6:30pm tonight, with the Nesbit project following at 8pm in the same room of the Ballard Community Center.