The East Design Review Board will consider the latest plan for the Westbank Frye High-rise project on First Hill this evening. This is the project’s first recommendation meeting and its second design review meeting overall having sailed through the Early Design Guidance (EDG) session earlier this year. Located across from the Frye Museum on Terry Avenue between Cherry and Columbia Streets, the project will be comprised of two 34-floor residential towers, leaning in opposition to each other and connected by a skybridge on the 32nd floor.

The project will be a unique addition to the skyline of Seattle and especially First Hill. Each tower will be subdivided into three boxes comprising of 10 or so floors. Each of these boxes will then be wrapped in metal, custom perforated shoji screens featuring artwork from the Frye Salon. 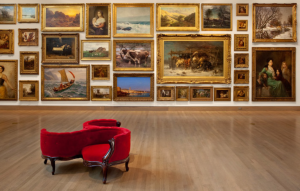 Frye Salon features over one hundred forty paintings from the Frye Art Museum’s Founding Collection, recreating the sumptuous viewing experience enjoyed by visitors to the
art gallery in Charles and Emma Frye’s Seattle home in the first decades of the twentieth century. Hung floor to ceiling, the paintings capture the atmosphere of the Fryes’ salon-style exhibitions, which showcased the artists of the renowned Munich Secession and the “stars” of the preceding Artists’ Association, the Munich Künstlergenossenschaft.
– Fryemuseum.org

These panels will act as sunscreens and will be attached to a track system so that they can be moved by the residents to enclose the balconies as well as their windows as the residents see fit. Overall this should create a dynamic, ever-changing image throughout the year.

The skybridge will foster a sense of “creative tension” between the two towers, which are ingeniously angled in opposing directions for both architectural style as well as to satisfy zoning requirements for tower spacing.

The twin towers will add 486 much needed market-rate apartment units to the marketplace with convenient access to transit as well as Downtown Seattle. The proposal includes a large secure bicycle storage room, bike showers as well as 315 parking spaces, including 50 for use by the Frye Art Museum. Parking will be spread across six underground levels for an average of 0.5 parking spaces per unit. This average factors in the proximity to Downtown, access to transit, and that First Hill has the lowest car ownership in the city. Currently, the Metro Route 60 stops one block west at 9th Ave and Cherry St and a future Madison BRT station will be located two blocks to the north at Terry Ave and Madison St.

The ground floor will feature a large open lobby area where works of art may be displayed to the residents and public and the corner of Cherry St and Terry Ave will feature space for a full service restaurant, including outdoor patio seating.

The overall streetscape has been heavily influenced by First Hill’s Public Realm Action Plan (PRAP) which dictates the neighborhoods desire for right-of-way (ROW) improvements to the neighborhood. As First Hill has very little available open space, the emphasis has been placed on repurposing the ROW itself as open space with an emphasis on people and not vehicles. The intention is to transform Terry Avenue, a designated Neighborhood Greenway, into a high-quality pedestrian-oriented thoroughfare from Yesler Terrace to Spring Street as the adjacent properties are developed. In line with these goals, the project will implement table-top (raised) pedestrian crosswalks across Terry Avenue as well as transform Terry into a Festival Street. This will include a curbless, closable roadway with limited on-street parking as well as water and electrical hookup locations for food trucks and other vendors.

As Terry Avenue is a Neighborhood Greenway, the First Hill Improvement Association (FHIA) and the developers have worked to minimize the impacts by locating all parking, trash, and recycling to the existing alleyway located between Terry and 9th Avenues. This also includes a resident pick up-/drop-off area to help remove idling vehicles from the Neighborhood Greenway as well as when Terry Avenue is closed for events.

This project, while possibly the most visually unique being developed, will not stand alone in this part of First Hill. In addition to these twin, 34-story towers, the immediate neighborhood will see a 24-story, 150-unit senior living building with an additional 93-unit assisted living facility on the southeast corner of Terry Ave and Cherry St, a 7-story, 74-unit building at Boren Ave and James St, an 8-story, 325-unit building on Terry Ave between James and Jefferson Streets, and a 30-story 290-unit residential building at 8th Ave and Columbia St among other neighborhood construction projects, including the two new medical towers for Swedish First Hill and the 17-story residential building that will replace the McDonalds on the corner of Marion and Madison Streets.

From the EDG meeting earlier this year, the East Design Review Board and the First Hill neighborhood are in full support of this project and the Vancouver based developers have been in continual conversation with the FHIA. This project should easily pass design review and become an important facet both of the Seattle skyline and the street-level architectural fabric of First Hill.

How to Get Involved

If you’re interested in attending the community design review meeting for the project, you can do so tonight (September 21st) at the Stuart T. Rolfe Room of Seattle University’s Admissions & Alumni Building at 824 12th Ave. The East Design Review Board will convene the meeting at 6.30pm. Alternatively, if you wish to submit comments in written form, you can do so by e-mailing Seattle Department of Construction and Inspection (SDCI) at PRC@seattle.gov.