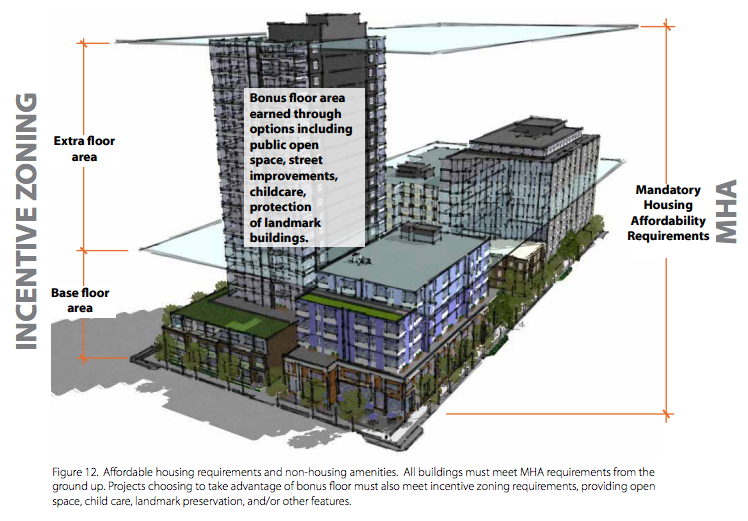 Here is the extended version of the one-minute public comment I delivered about 30 minutes into the Planning, Land Use, and Zoning (PLUZ) committee (video) at Council Chambers this morning regarding the pending U District Urban Design plan. More background on the meeting is here.

I support the proposed rezone and urban design changes for the U District, and I urge you to pass them as soon as possible to unleash the Mandatory Housing Affordability-Residential (MHA-R) program.

MHA-R, also known as mandatory inclusionary zoning, ensures some lower income people can still live in supercharged real estate markets, thereby counteracting the tendency for popular neighborhoods to become segregated by income level. A mix of income levels is key to a healthy neighborhood and city; MHA-R’s greatest virtue perhaps is its ability to further that goal.

The U District has some of best and most frequent transit in the state, and it will only get better after the Northgate Link extension brings light rail to Brooklyn Avenue. That means growth in the U District won’t be nearly as car-dependent as some other neighborhoods, encouraging our city to grow while decreasing our nation’s bloated carbon footprint. In fact, Seattle has grown rapidly in recent years without increasing its carbon footprint. That’s quite a feat. Let’s continue in that direction, and nothing fits the bill better than density near a subway station.

I’ve heard cases for deregulating zoning that argue increased supply increase brings down prices, and zoning and land use controls are the primary thing inhibiting supply. Me, though, I’m going to sidestep the economic theory chalkboard to argue you should support increasing development capacity because it makes better neighborhoods. If you want a surface parking lot or rundown low-slung building to turn into a mixed-use building with a small business in a street-level storefront and residences for new neighbors above, these zoning changes push the needle in that direction. Moreover, new development comes with urban design elements that encourage better sidewalks, bike infrastructure, sustainable building practices, green space, and on-site storm-water systems to reduce runoff. In other words, a more eco-friendly and vibrant city.

So please pass this U District land use proposal as soon as possible and keep that momentum going by following up with rezones across this city so the development boom we are experiencing comes with the benefits of MHA-R.