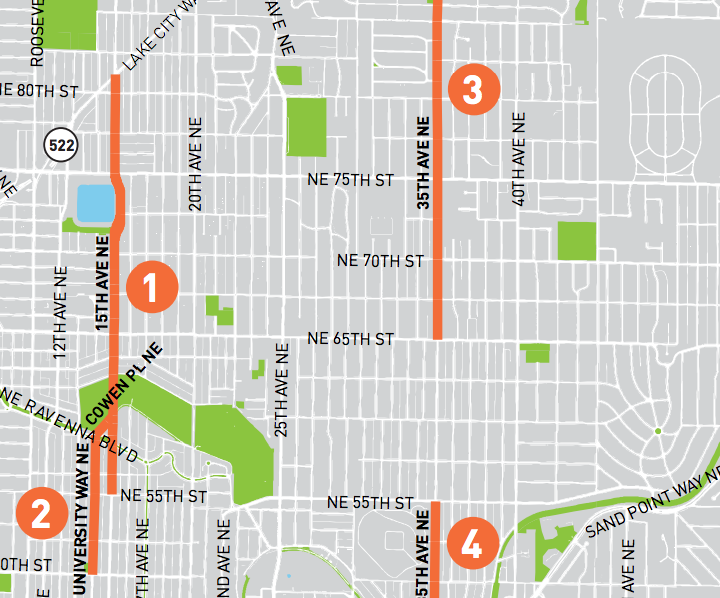 At an open house Monday night, the Seattle Department of Transportation unveiled a number of options for street designs on Northeast Seattle arterials that are scheduled to be repaved in the next few years. These repavings are prime opportunities to get street improvements and rechannelizations completed relatively quickly: the streets are getting torn up anyway.

The streets that are up for repaving in 2018 are:

Despite Seattle’s Complete Streets ordinance, which was passed in 2007, advocates for complete streets that work for all modes still need to make sure they are heard on almost every street reconfiguration project. That is no different in this case.

One design concept for University Way sacrifices protected bike lanes to retain one lane of back-angle parking. With the back angle parking replaced with a lane of parallel parking would allow three feet of buffered separation between the bike lanes and the general purpose lanes.

Another concept pair presented at the meeting showed two designs for 15th Ave NE, the only difference between the two being a buffer on the bike lane in one direction.

Both of these streets are not high priorities for bike facilities in the bicycle master plan, but the repaving provides a great opportunity to add facilities cheaply and make safety improvements to the street by slowing down traffic at the same time.

The north segment of 35th Ave NE, however, is on the bike master plan as being an important bike corridor in the northeast corner of the city, connecting a future greenway at NE 68th Street all the way north to 125th Street. But the concepts presented clearly fall short of the master plan’s vision.

One concept did not provide protected bike lanes at all, and the other only provided them on one side of the street. Clearly SDOT does not have the appetite to sacrifice parking to accomplish the vision laid out in our city’s master plan. It is unclear if there is enough space to fit everything on 35th and retain one parking lane.

Meanwhile at the southern segment of 35th Ave near 45th St, a bike lane is only planned for one direction, and it will not have protection.

SDOT’s data presented showed that this portion of 35th Ave NE is the street among the ones slated for repaving where traffic is currently travelling at the fastest speed. The 85th percentile speed of drivers on the street was found to be 37 mph. If proposing sharrows in one direction and a door zone bike lane in the other direction on a street where drivers are traveling well above the speed limit is not in conflict with our complete streets ordinance, I don’t know what is.

These projects are going to be taken to full design within a year, for construction in 2018. Now is the time to make yourself heard by telling SDOT that complete streets should be taken completely seriously. Contact Dawn Shellenberg at SDOT with your comments, dawn.schellenberg@seattle.gov.