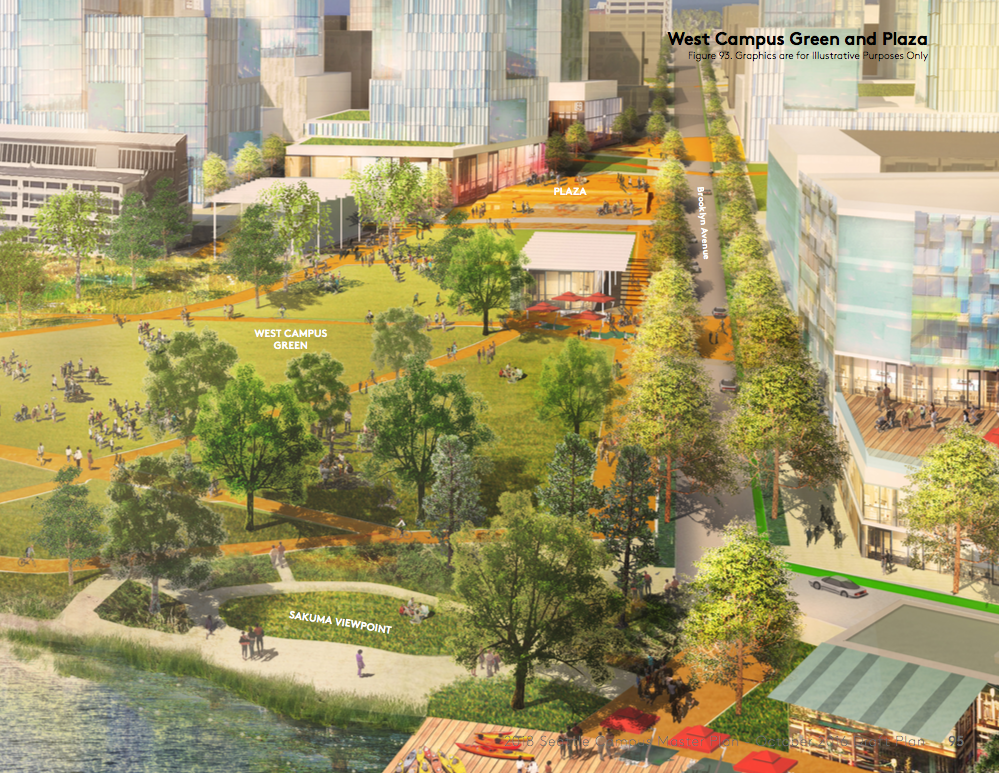 The University of Washington (UW) is deep into its Seattle campus master planning update for 2018. Earlier this month, the university released the draft plan and Draft Environmental Impact Statement (DEIS). The master plan is intended to cover a 10-year planning horizon, but also takes a look at future needs further beyond on the time period.

What the Campus Master Plan doesn’t account for are other satellite spaces that the UW leases or owns throughout the city, including: UW Medical Center-Roosevelt, Sand Point, office space in Smith Tower, the University Tracts in Downtown Seattle, Harborview Medical Center (a UW affiliate), research space in South Lake Union, and dozens of other locations in Seattle proper.

Here is what precipitated the plan: UW planners expect to see a 20% growth rate over the next year 14 years. The growth rates cuts across the board for student, faculty, and other staff.

The UW says that new space would be directed into four areas:

The campus master plan is an important document for the university if for no other reason that it alone guides the amount of development capacity that the main UW-Seattle campus has during the life of the plan. That’s because under a City-University agreement the university is only beholden to development standards of the campus master plan and Major Institutional Overlay (MIO) that UW property is designated, not other development regulations established under the Seattle Land Use Code. For those who may have wondered why the University District rezone and urban design proposal skipped areas south of NE 41st St and east of 15th Ave NE, the university’s separate MIO is why.

The University of Washington’s long-term vision would see significant new investments in space in the burgeoning West Campus and introduce new space in areas like East Campus, which both have ample amounts of surface parking. Most new development on the Central Campus would be focused along the eastern hillside that runs parallel to Montlake Blvd NE; some targeted infill locations near the Burke Museum, 15th Ave NE, and Benson Hall could also see development.  The South Campus, which is home to UW Medical Hospital, would see substantial amounts of redevelopment, both on NE Pacific St and along Portage Bay.

The 10-year conceptual plan, however, would focus most new campus development in the West Campus and South Campus. The beginnings of a new academic precinct could find its way to the north parking lots in the East Campus area; four sites that would provide up to 740,000 new gross area of space. And some infill development could be scattered throughout the Central Campus.

The draft plan highlights each of the four campus subareas by depicting the existing built form and future building forms. Plan objectives and benefits are noted throughout the diagrams, in addition to major campus gateways, active ground floor spaces, primary pedestrian paths, and open spaces. What’s encouraging about the conceptual plans is an emphasis on reducing barriers between campus sectors and adjacent areas (e.g., softening 15th Ave NE and creating physical and visual linkages across Montlake Blvd NE and NE Pacific St), and making use of the extensive central university landholdings. The diagrams speak for themselves:

The draft plan has a lot more in it that just building assumptions. Planners have paired existing and proposed conditions together to show what might change in terms of the pedestrian network, open space, bicycle network, shoreline amenities, accessibility, transit, building heights, and parking to name a few.

Planners expect to greatly infill the primary and secondary pedestrian routes throughout the campus. Most of the new routes would appear at the edges of the campus:

Bicycle facilities could get on-campus improvements beyond changes to the Burke-Gilman Trail. Things like protected bike lanes on Stevens Way, a new through connection at the UW Medical Center, bike lanes to East Campus and University Village, and other infill routes are all on the table:

West Campus could get perhaps the grandest public space on campus with a new 4.16-acre green and 0.4-acre plaza. This is on top of the 2.44-acre site that the City of Seattle is developing as the new Portage Bay Park (presently in planning) and enhancements to the university-owned Sakuma Viewpoint on the edge of Portage Bay. The university’s proposal would require vacation of NE Boat St and major street calming changes to NE Pacific St and Brooklyn Ave NE.

The university assumes that 10,940 parking spaces subject to the cap could be consolidated to 14 parking lots (indicated below). Most new parking would be housed in two-story structures, usually below other uses in a building:

As noted before, planners have taken stock of remaining development sites and newly identified sites:

85 separate development sites have been identified by planners with the bulk of them outside of the Central Campus subarea: 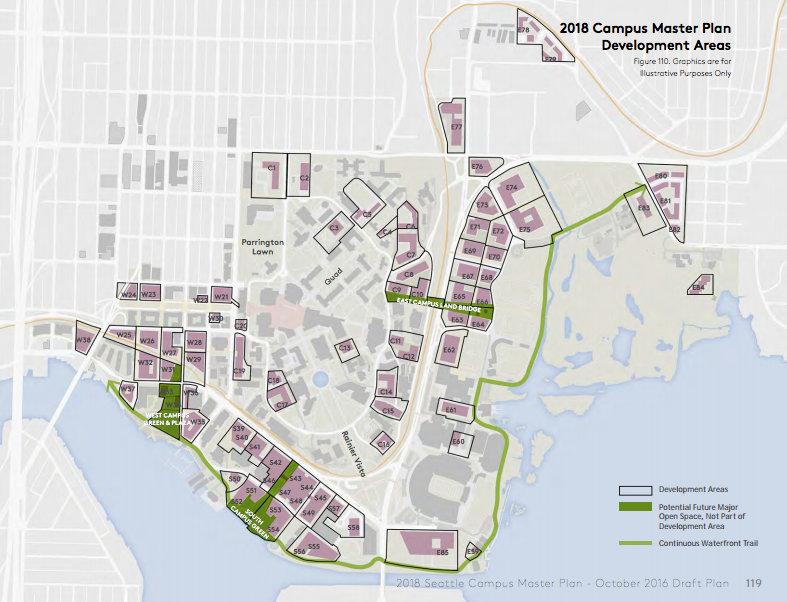 To facilitate efficient and economical development of the sites, the university would propose changes in allowable building heights and capacity:

The University of Washington recognizes the importance of the university as a historied public institution and dynamic space. Written into the plans are specific vision goals to create active and inviting spaces, preserve historical and architecturally significant resources, emphasize key vistas and open space assets, and respect the human-scale character of the university. Each of these goals are important aspects of placemaking and thoughtful infill development and redevelopment.

The kinds of development standards that guide the design approach include things like control of signs and banners, development near shoreline areas, historic and cultural conservation, setbacks and height allowances, active street level uses and transparency, building orientation and floorplates, and much more. The university assigns project review to the UW Design Review Board, UW Architectural Commission, and the University Landscape Advisory Committee where appropriate for the type and scale of a proposal. To give a sense of the standards, the following quotes from the draft campus master plan offer a window into the university’s approach to controlling campus development.

Demolition is permitted prior to future development. Demolition permits are submitted in advance of a building site being selected for development and are allowed as long as sites are left in a safe condition and free of debris. Demolition of any structure, including any structure that is more than 25 years old or historic is allowed if authorized by the UW Board of Regents.

There is an extensive discussion on the process for identifying and protecting historic and cultural resources.

Consistent with other methods of calculating building square footage, the Campus Master Plan gross square feet will not include open areas such as parking lots, playing fields, courts, and light wells, or portions of upper floors eliminated by rooms or lobbies that rise above single-floor ceiling height. It will include top, unroofed floors of parking structures where parking is available

Façade modulation is not required for University development, however the design of buildings will strive to incorporate measures that provide for appropriate variety, express varying functions of the building and respect the pedestrian scale at the ground level.

All development sites with active ground floor designations should have well-placed pedestrian entry points, and largely transparent ground level facades that make visible interior amenities and activities. The design should contribute to and enhance the quality of streetscape and neighborhood character with multi-functional landscapes and pedestrian-environment amenities.

All buildings situated along active edges shall have an active use along 75 percent of their frontage at the street level, as identified on pages 242 through 245. Sixty percent of this frontage should be transparent to allow visibility into the space. In areas that a blank façade is required, its maximum width shall not exceed 15 feet. Active street level uses support pedestrian activity throughout the day along public right of ways and public realm spaces, where pedestrians can view the activities inside.

Podium height refers to the base of a building and is clearly differentiated from the spaces above by its physical form and extent. Podiums shall be a maximum of 45’ in height, with development above stepping back according to upper level setback guidelines under the public realm allowance. The intent is to maintain a pedestrian friendly scale and minimize the impact of shadows on the public realm.

These, of course, are only a few of the development standards that the university intends to set for itself. There’s a lot more packed into the draft plan to govern the form of development. The document as a whole is worth perusing.

If you have comments on the proposal, you should send them to cmpinfo@uw.edu. The public comment period on the draft plan and DEIS are open through November 21st. Early next year, the university will issue the final plan and FEIS before sending the proposal to the City of Seattle for recommendation by the Hearing Examiner and approval by the Seattle City Council. The precise timeline is unknown given the public hearing and appeals process, and the discretion of the City Council to put the proposal on their agenda. Regardless, a final version of the campus master plan update could be adopted by mid- to late-2017.