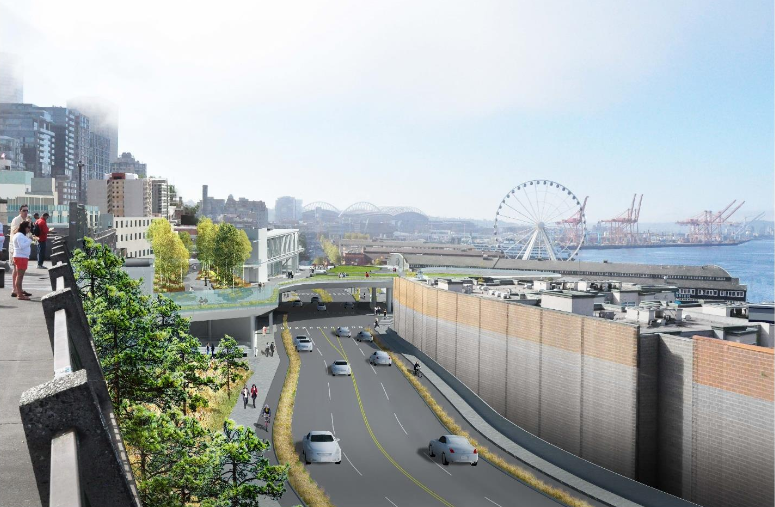 On Monday, the Seattle Department of Transportation (SDOT) released the Final Environmental Impact Statement (FEIS) for the new, post-viaduct Alaskan Way and accompanying promenade along the waterfront. It shows us our future along the waterfront: a massive roadway, nine lanes in parts, separating our city from its waterfront in much the same way that the Viaduct separates us today. Years in the making, it is nonetheless jarring to see solidified into a final document such a disappointing public amenity as this proposed oversized waterfront roadway. But how did we get here?

Well, let’s look at the history. First, we selected an underground freeway from point A to point B over investing in our downtown street grid. Why use the whole toolbox when you can use a sledgehammer? There is also the fact that, at this point in time, we have no alternative to ferry queuing along the reimagined waterfront of Washington’s largest city, the road is largest where two lanes are devoted entirely to this purpose. Washington State Ferries are a part of our state’s highway system, so car-centric street designs are just part of the package, I guess.

But, overall, the main culprit is, as the fingerprints in the FEIS suggest, the benign-sounding idea of the Level of Service. SDOT is still using this concept, developed by the American Association of State Highway and Transportation Officials (AASHTO), that measures success of a roadway by using a grade level of congestion.

This chart shows how the new intersections that are predicted to have incredible levels of delays (over 200 seconds) like Pine and Spring Streets would go to “A” levels of service with the new roadway. It is notable that further south, the intersections don’t receive as high of letter grades because we simply can’t add any more lanes on top of the ones being added for ferry queueing.

The director of the City’s Office of the Waterfront, Marshall Foster, made his point quite well when talking to KING 5 earlier this week: “The traffic on that viaduct will move underground, but the buses, the freight, and the uses that are on there today, they do have to continue to use the surface street.” In other words, the Alaskan Way we are looking at now is basically the same Alaskan Way that we would be getting without a deep bore tunnel. The tunnel is not expected to keep a large portion of traffic off our city streets, because our city streets are where they want to be.

Comparisons are already being drawn between the new Alaskan Way, and the “new” Mercer Street, and the comparison is apt on many levels. First, the head engineer at SDOT, Angela Brady, is the same on both projects. And we can look back and see the arguments used in the Mercer Street FEIS toward the Level of Service standards. This chart shows LoS as “F” in a no-build alternative along Mercer by 2030, and green (which could mean anything from A to D) in the alternative we recently completed–the same design that became swamped with traffic almost immediately and is now only two seconds faster than before.

Do we need to see the principle of induced demand play out on our waterfront? One of our city’s greatest assets?

One of the most frequent ideas heard from city representatives is that Seattle is entirely built out, and that we aren’t adding streets: it’s time to make what we have work better. But time after time, when the opportunity arises to improve the “level of service” for drivers in automobiles, whatever the price to the environment, public space, and Vision Zero standards, we frequently take it. We have seen this with Lander Street, Montlake Boulevard, and of course every single piece of the SR-99 tunnel. When will we stop seeing this city only through a windshield perspective? When will we start investing the millions of dollars for these projects in Seattle’s future instead?

Let SDOT know how you feel about the proposal by emailing the project manager at Angela.Brady@seattle.gov, the Director of the Office of the Waterfront at Marshall.Foster@seattle.gov, and filling out this contact form. Also let the Seattle City Council know how you feel as they will have to approve the plan. Look up the your councilmember contact info here. The waterfront resides in Councilmember Sally Bagshaw’s district (206-684-8801 and sally.bagshaw@seattle.gov).

October 2016 – Waterfront Seattle FEIS by The Urbanist on Scribd