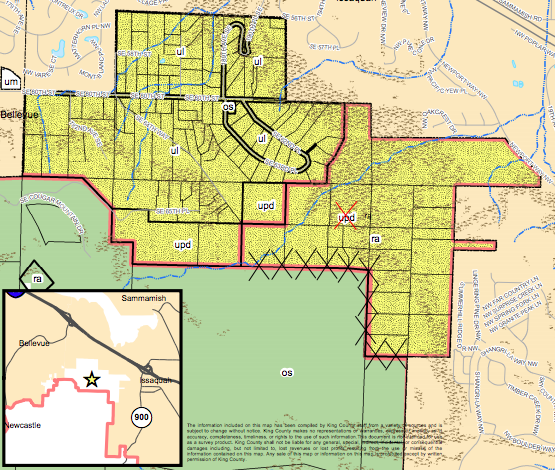 In late September, the King County Council’s Transportation, Economy and Environment (TrEE) Committee met to discuss amendments to the King County Executive’s Recommended Plan for the County’s 2016 Comprehensive Plan Update. As a major update, the County often looks toward significant changes to the Comprehensive Plan. Numerous land use proposals were considered through the update cycle, but the County largely focused on non-Urban Growth Area expansion changes to Future Land Use Map (FLUM). The following summarizes the the FLUM and zoning changes that the TrEE approved through the committee process, plus two extra proposals that were not reviewed by the TrEE. A public hearing will be held on the land use proposals on November 28th at 1.30pm and a final vote by the full Council could occur as early as December 5th.

In the Preston area, the Executive recommended only zoning changes to five properties. The SDO zoning designation was proposed for removal since the condition only governs critical areas, which are now simply subject to the County’s critical areas ordinance. The split zoning (RA-5/RA-10) on the largest parcel was proposed to be consolidated to the higher density zoning of Rural Area-5 (RA-5). The TrEE affirmed this proposal with no changes.

The TrEE Committee supported three sets of adjustments to urban FLUM and zoning changes in the Fairwood, Federal Way, and Maple Valley. The Maple Valley changes present a unique case where the urban growth area would effectively expand through the County’s Four-to-One process.

Earlier this year, the Executive’s Recommended Plan had studied four large parcels of land in the Fairwood area and proposed FLUM and zoning changes on the northernmost parcel. The proposal sought to increase residential densities from Urban Residential Medium (um) to Urban Residential High (uh) with a corresponding rezone from R-6 to R-18. The southern three parcels were proposed to remain unchanged. The TrEE Committee, however, adopted an amendment to the proposal to redesignate and rezone the southern three parcels of land as well, subject to specific conditions, which is the properties are shown with a special “P” suffix.

The Executive recommended that a corner lot outside of Federal Way be redesignated and rezoned. The site is currently designated Urban Residential Medium (um) with R-4 zoning. The Executive’s recommendation sought to change the site to a Neighborhood Business (nb) designation and rezone to Neighborhood Business (NB). The TrEE Committee affirmed the recommendation without change.

The Rainier Ridge zoning proposal in the Maple Valley area is a unique case where the Urban Growth Area would be expanded if approved, but there is a little backstory to it. The property owners of Rainier Ridge, a subdivision, entered into an agreement with the County under the Four-to-One program, which allows property to be added into the Urban Growth Area and developed at urban intensities. Certain requirements must be met by proposals, but in this case, the developer had to agree to setting aside 56 acres of land for conservation purposes in 2014. The remainder of the property (14 acres) was permitted to be added to the Urban Growth Area contingent upon the the City of Maple Valley commencing annexation proceedings and entering into an interlocal agreement. The TrEE Committee amended this condition to require annexation to be completed on or by December 31, 2017 and removing the interlocal agreement requirement. If this condition is not met by the deadline, the Rainier Ridge property would revert to its Rural Area (ra) FLUM designation and Rural Area-5 (RA-5-P) zoning.

In the case of Covington, the line is proposed to move the Urban Growth Area boundary from the middle of SE 240th St to the north side of the right-of-way for a few hundred feet at most northwestern edge of the city.

A proposal near Carnation seeks to add 5.2 acres of land to the Urban Growth Area and set aside 20.8 acres into open space under the Four-to-One program. The proposed urban portion of the property would go from Rural Area (ra) to Rural City Urban Growth Area (rx) on the FLUM and Rural Area-10 (RA-10) to Urban Reserve (UR-P) on the zoning map. The open space would be dedicate for permanent public use.

A Four-to-One proposal at the edge of the Urban Growth Area near Black Diamond is proposed to be amended through zoning-based conditions. The proposed changes would:

The King County Council will hear these issues as part of the whole 2016 Update Comprehensive Plan package on November 28th.