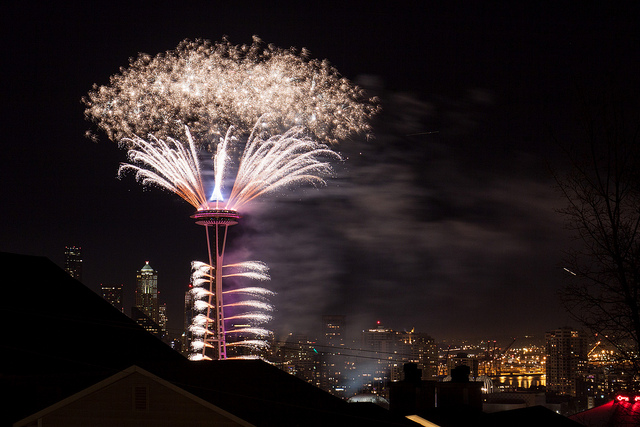 Transit agencies around North America are getting ready for travelers in their cities to ring in 2017 in classic fashion, by going out. In Vancouver, BC, all public transit city-wide will be free of charge starting at 5pm on New Year’s Eve. Extra buses will run to accommodate later riders, and SkyTrain service and SeaBus service will run until 2am.

In Portland, Oregon, transit service system-wide will be free after 8pm. MAX lines will be running until 3am to accommodate those staying out late for the holiday.

In San Francisco, rides on Muni buses are free after 8pm, and BART service will be extended until 3am.

In Seattle…King County Metro will run zero extra buses to accommodate holiday service and charge full fare the entire time. No additional buses to serve even the Seattle Center grounds for those visiting the Space Needle to watch the fireworks up close. Sound Transit will run a total of one additional southbound train from UW  (at 1.03am) and zero additional trains from Angle Lake. The monorail will be running additional trains from the Seattle Center grounds to Downtown until 1am, but the final monorail is not timed to meet up with the final southbound Link train.

Other agencies in our region aren’t much better, with Pierce Transit, Community Transit, and Kitsap Transit all declining to provide extra service on December 31. Washington State Ferries does run an extra ferry between Bremerton and Seattle after midnight, but with no extra bus service you’re probably getting on that ferry with your car.

That is the extent of the degree to which local agencies have collaborated to ensure that riders have enough of an incentive to leave their car at home one night when inebriation is at high levels.

Meanwhile, the Seattle Department of Transportation, under the auspices of Vision Zero, is heavily promoting ride-booking services who are offering discounted rides. While not subsidizing the rides themselves, they are endorsing ride-booking services as a way to prevent drunk driving, rather than dependable transit service that runs when riders need it to. Studies on the impact of companies like Uber on DUI rates have shown so far that they aren’t that effective. But considering the fact that these are presumably low-cost programs for the City to be running, then they should be used in conjunction with increased transit service, rather than instead of it.

Meanwhile, DUI stops are up in at least one Seattle precinct, the East, Capitol Hill Seattle reports.

The most obvious place for added service on New Year’s Eve would be added Link trains and additional buses to and from Seattle Center. As for the Link trains, Sound Transit’s response is that it needs the service window where no trains are running on the tracks to perform maintenance, even on New Year’s Eve. But on New Year’s Day, Sound Transit service starts an entire hour later than it does on a weekday. So on face value, this excuse doesn’t pan out. Even if true, a transit agency like Sound Transit should be able to rearrange its maintenance schedule to accommodate a major holiday…like all other major cities do.

The lack of response to New Year’s Eve is indicative of the approach that our regional transit agencies take toward its riders. In a city like Vancouver, BC, transit runs later on New Year’s Eve because riders depend on it. In Seattle, clearly not enough riders depend on the bus to get to and from their holiday events, so the transit agencies have not responded accordingly. Of course, they also should take responsibility for tacitly encouraging the riders who are left behind to find other means of transport, even if they are not physically fit to drive. That is not a Vision Zero approach, that is a Vision Some Other Number approach and it is simply unacceptable.

It is time for our region’s transportation agencies to come together and join our peer cities in stepping up to provide stellar holiday service.