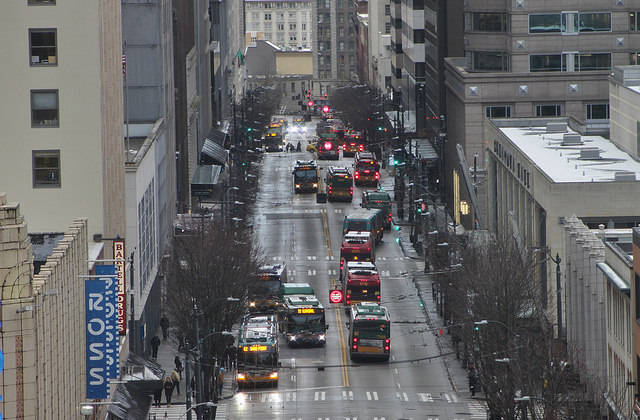 Commute Seattle has released their biennual report on commuting habits to Downtown Seattle. The raw numbers from 2016 show that Seattle’s drive-alone rate continues to decline as job growth increases; that number now stands at 30%, down from 31% from two years prior. Transit ridership jumped two points to 47% while biking (3%) and ridesharing (9%) both held steady; walking saw a modest one-point decline to 6%.

A new Commute Seattle survey conducted by EMC Research shows that more than 70 percent of downtown’s estimated 247,000 daily commuters opt for transit, ridesharing, biking, walking and teleworking–leaving less than 30 percent of commuters to drive alone to work. That continues a strong downward trend in solo driving from 35 percent in 2010 and 34 percent in 2012 and 31 percent in 2014.

Downtown Seattle added 45,000 jobs from 2010 to 2016, and an impressive 95 percent of the net increase in daily commute trips have been absorbed by transit, rideshare, biking and walking.

Public transit remains the top choice for downtown commuters (47%), with ridesharing (9%), walking (6%), bicycling (3%), and teleworking (3%) rounding out the 70 percent of commuters not driving alone.

Commute Seattle says that with added job growth and new commute trips over the past six years, the chosen non-drive-alone mode share translates to approximately 31,000 more transit riders, 2,300 vanpoolers and carpoolers, and 9,000 more people walking and biking. Think about that for a moment: 42,300 out of 45,000 new employees are not driving alone during peak commute times to and from Downtown. This means that about 94% of all new peak-hour commuters are choosing non-single occupancy vehicle options. The long-term trend paints a picture that Seattle is likely to continue seeing drive-alone rates decline, and perhaps even begin to decline in absolute trip terms. Seattle may be on the cusp of peak car for Downtown.

The Downtown neighborhoods outside of the retail and business core, however, are lagging behind in terms of commute share. 37.5% of commuters in South Lake Union (SLU) are still driving alone to work compared with 29.4% taking transit. With 11,000 parking stalls in planning or construction stages for that neighborhood, the incentive to sit in traffic might remain for SLU residents and employees, especially if transit routes become truncated as is being discussed in the One Center City proposals currently making their way through the public outreach period.

2016 Commute Seattle Mode Split Infographic by The Urbanist on Scribd