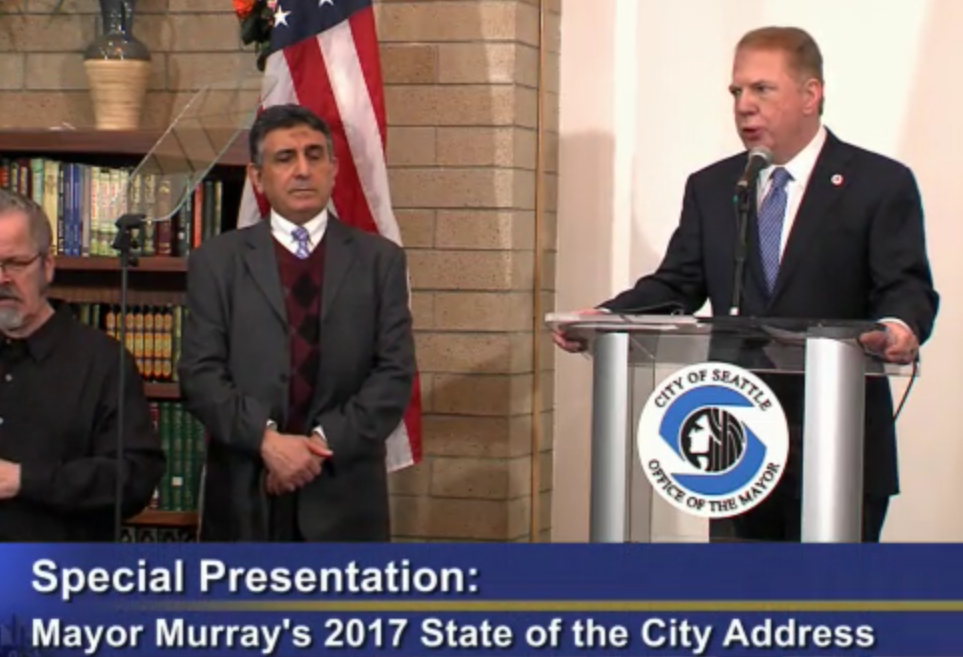 On Tuesday at Idris Mosque in North Seattle, Seattle Mayor Ed Murray drew a stark contrast between Seattle’s approach to governance and the one he sees forming at the Federal level.  The 2017 State of the City address was also a high profile campaign event for a mayor who is seeking a second term this year. The mayor unveiled several substantive policy proposals and sought to ferment his legacy by highlighting work from his first three years.

One would be a property tax levy that would double the City’s spending on homelessness, raising $55 million per year. The mayor has enlisted a task force–as the mayor has done on almost every major issue–which includes Councilmembers Sally Bagshaw and Debra Juarez as well as Downtown Emergency Services Center Executive Director Daniel Malone and hedge fund investor turned activist Nick Hanauer. He is asking for a proposal within 14 days, and is hoping to get on the ballot in August.

“We budgeted 108 million dollars for homelessness services combined over the last two years, more than under any mayor in Seattle history.

These are big steps.

But as anyone can see from the dystopian scenes on the streets and the disarray on our sidewalks, and as those who are living in unsafe encampments and outside can attest themselves: This has not been enough.”

We can assume this funding package will funnel more money into the aspects of the mayor’s Pathways Home proposal: investing in mental health treatment, treatment of addiction, and most importantly investing in permanent housing for people living on the street. The mayor challenged the Seattle business community to invest $25 million over the next five years in what he called “disruptive” innovations.

The mayor also announced that he will be activating the City’s Emergency Operations Center this week after officially declaring a state of emergency 15 months ago. The hope is the center could speed the delivery of services to people experiencing homelessness.

The other new funding source announced would be dedicated toward education: a two cents-per-ounce tax on sugar-added beverages. The approximately $16 million that would come from this new tax would go toward a slate of education-enhancing programs. The most high profile one would pay for the first year at a Seattle (community) college for Seattle residents directly following their senior year in high school- the “13th Year” program.

“We have heard loud and clear that we must address the persistent disparities in outcomes in our public schools between white students and Black students and other historically underserved students of color.” 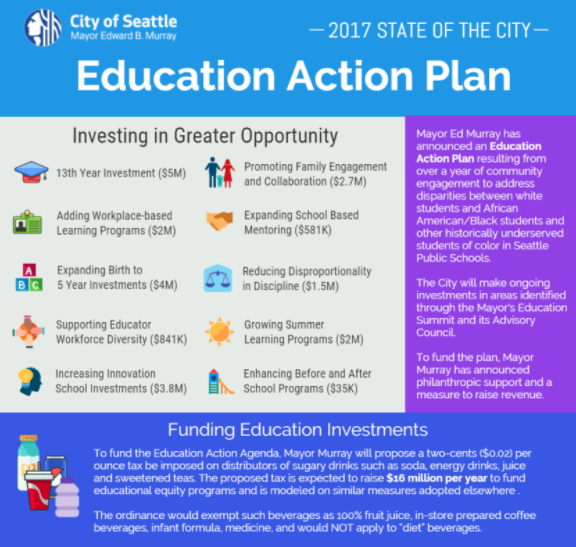 The mayor also announced an increased effort to focus on young black men–a Seattle-centric version of Barack Obama’s My Brother’s Keeper initiative, in other words. The program, which is called Our Best, would expand on the mayor’s proposal to create a Youth Opportunity Cabinet and focus on recruiting and training mentors for young black men. This effort aims to double the number of mentors and will be guided by–you guessed it–an advisory council.

“I am also creating a new special advisor to the Mayor focused on Black male achievement to work full time across departments, with the Advisory Council and with the many community leaders who have answered this call long before us.

Our Best is all of ours. And the fight for young Black men is a fight for Seattle, and our region.”

Work on police reform was another focal point, with the mayor bringing up a proposal that would establish citizen oversight of the Seattle Police Department (SPD). The proposal has been sent to Lorena Gonzales’s city council committee. The mayor touted the progress SPD has made over the last few years while under a Federal consent decree:

The mayor touted the Housing Affordability and Livability Agenda (HALA) and cited the Mandatory Housing Affordability (MHA) program that the council initiated yesterday afternoon by unanimously approving the U District Rezone. He echoed Rob Johnson, who came under fire recently by neighborhood groups when he compared Donald Trump’s border wall proposal to opposition to zoning changes in Seattle:

Growth is not the question – growth is here. On average, 67 new people are moving here every day.
If we do not build more housing, we have seen what happens: more and more people compete for the same homes and prices go up, creating an invisible wall around our neighborhoods and locking people out.”

Finally, in the last segment of his speech, the mayor called out Seattle’s sister cities and emphasized Seattle’s need to reach outside our borders during the Trump administration.

“When the diplomacy of our elected leaders fail, citizen diplomacy can be a powerful corrective.”

He announced that the City of Seattle will be taking legal action against the administration in the form of Freedom of Information Act (FOIA) requests that seek documentation on how the city may be affected by changes in immigration law and at Federal agencies.

One aspect missing from the mayor’s speech was transportation, notable because the only credible challenger to the Mayor’s reelection bid at this point in time, Andres Salomon, is making transportation inequity and misspending the centerpiece of his campaign. But it was a very meaty speech that laid out the mayor’s plan for 2017, and the policy proposals announced put the issues that the mayor is passionate about front and center.