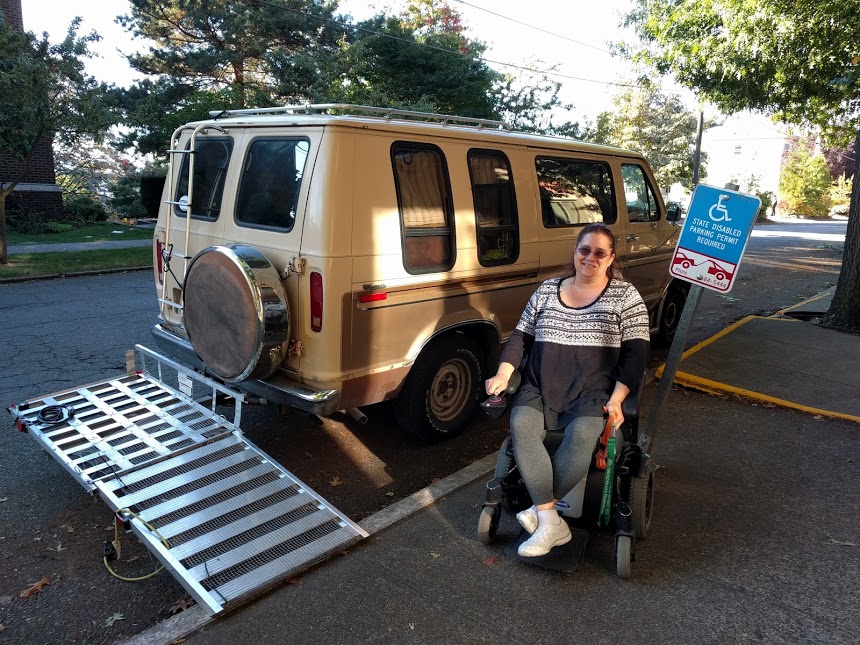 Kristina Sawyckyj is a former marine, serves on the board of the Resident Action Project, participates in a veterans’ support group, is an active member of her church, and is pursuing a law degree. She’s also homeless and suffers from physical disabilities requiring her to use a wheelchair. Despite holding a housing voucher from the Department of Veterans Affairs (via the United States Housing and Urban Development-Veterans Affairs Supportive Housing program), she’s been homeless since last October. Her current shelter is a van.

Kristina entered homelessness when she separated from her spouse. Beforehand, she lived in Snohomish County and commuted to her classes at Seattle Central Community College.

Two obstacles make Kristina’s housing search particularly difficult. First, she was fortunate to have a housing voucher through Veterans Affairs but it was only good for $1,100 a month in rent. In central Seattle, average rents for one bedrooms are likely north of $1,400 and continue to rise. Lower cost housing doesn’t fit her needs well either. Even studios in MFTE buildings cost more than her housing voucher. Alternatively, micro-housing often rents in her price range but doesn’t work due to the second factor that complicates her search. Kristina needs a wheelchair accessible unit.

Accessible units are hard to find. The small amount of accessible housing she finds, rents quickly, oftentimes to people who don’t use a wheelchair but like the additional space. Her best option is spending hours chasing units in Seattle’s suburbs, far removed from the community she’s established, illustrating that the housing crisis is about more than average rents.

The lack of options in the private market forced Kristina to pursue nonprofit housing. Unfortunately, she didn’t have any more luck with that.

In March of 2016, a friend at church told her an accessible unit would be available in a Mercy Housing apartment building. She quickly submitted an application. Within a month, the application was denied. The unit she applied for depended on nonprofit government tax credits that come with various rules. One of the rules is a prohibition on renting to full-time students, a demographic that is seeing rising rates of hunger and homelessness. Kristina learned that a lot of nonprofit housing would be off limits since it uses the federal Low Income Housing Tax Credit. Since our original conversation in November, Kristina actually stopped renewing her housing voucher because she couldn’t utilize it.

The Repercussions of Homelessness

All this crystallized the stark fact that Kristina had to choose between finishing school and having shelter. So far she has decided to continue school. “I want to get off all government programs,” Kristina told me. She wants housing but believes her education is the path to self-sufficiency.

Without housing, Kristina also loses eligibility for other supportive services. Many local social services offer support she needs but require an address. “I don’t qualify for the home healthcare services I need. I can’t open the bottles I need and sometimes go a week without medication,” she said. “In the past, I had a caregiver but it’s state policy that you have to have an address to have a caregiver.”

“You miss out on a lot being homeless,” Kristina laments.

She estimated that 80% of the food she eats is from her supportive community. Since she doesn’t have a house, she doesn’t have a kitchen. She also can’t receive meals from The Chicken Soup Brigade. “You have to have a fridge or freezer for meals on wheels.” Instead, her volunteering takes her to meetings that often provide meals. When that’s not an option, she sometimes finds herself eating Spaghetti-Os out of the can.

While her community–her church, the veteran’s support group, friends, her school–is a large key to successfully navigating her homelessness, utilizing a housing voucher would necessitate moving away from this community.

Despite the long effort to obtain housing, Kristina joked, “The only thing that would make my housing situation worse would be if I had a pitbull service dog” and ended by saying “I’m blessed” after reflecting on all the support she’s received. She’s planning to enroll at a university in the fall and expects the school will be able to provide housing. Until then, her home is her van.