Last month, I provided a high-level overview of the Final Environmental Impact Statement (EIS) for land use changes in the Uptown neighborhood. To realize the modeled land use changes in the Final EIS, the Office of Planning and Community Development (OPCD) has drafted specific development regulations that would be paired with zoning changes. These include custom-made urban design regulations for the Seattle Mixed-Uptown (SM-UP) zones that touch on things like:

More broadly, the rezones and new development regulations would be subject to mandatory affordability housing requirements. Zones that do not change to the SM-UP zoning type would have to meet the existing development standards. 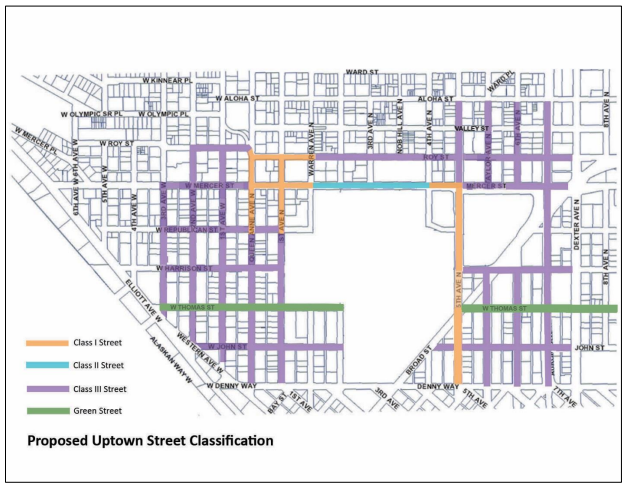 Depending upon the ultimate zoning put in place, new developments on many sites with SM-UP zoning would need to meet the following minimum density regulations, which are similar to the ones already in force on properties with a Pedestrian designation. The implications of the regulation, however, would be far more reaching since proposed Class I, Class II, and Class III Pedestrian Streets and Neighborhood Green Streets would cover most streets receiving a rezone. The minimum density regulations are designed to prevent under-building on sites and encourage pedestrian-oriented developments.

It’s worth noting, too, that minimum density requirements would apply to any development action that proposes to add or remove more than 1,000 square feet of gross floor area. So minor changes could be exempt even if they fall on properties meeting the street classification standard and zoning, but they would be a rare exception.

On the flipside of density control, the draft regulations would new establish maximum density requirements for the custom made SM-UP zones. Each zoning type would be paired with a base floor area ratio (FAR) maximum regardless of use. In the SM-UP 125 and SM-UP 160 zones, the maximum FAR could be increased above the base if certain incentives are used to achieve the additional floor area. In other cases, the base FAR limit is the absolute maximum, so in the SM-UP 65 zone, a developer could proposed a 4.5 FAR of exclusively residential uses, but would then be unable to include any non-residential uses. In the SM-UP 160 zone, non-residential uses are limited to encourage residential high-rises.

Generally, buildings in SM-UP zones wouldn’t be permitted to exceed a width or depth of 250 feet. The development standard, however, wouldn’t apply to retained Landmark structures that are redeveloped nor to structures that have more 50% of the total gross floor area dedicated to uses such as: community clubs or community centers, religious institutions, performing arts facilities, or early education (e.g. preschool, elementary, or secondary schools). A special exception would also be carved out a low-rise structure containing a light rail station. The overall goal of the general requirement is to reduce structural bulk and foster variety of buildings on streets.

Additional parking standards for motorized vehicles are proposed for all SM-UP zones with a goal of providing a better urban design experience for pedestrians. Generally, one story of parking above the first story of a building would be permitted for each story of parking below ground, up to a maximum of two stories above ground. At street level, parking areas would only be permitted if they are fully separated from the street by another use in a structure. And for parking areas above the first story, the following requirements would have to be met:

Properties with an SM-UP, LR1, LR2, or MR zoning designation in Uptown may qualify as a sending site for the purposes of transfer of development rights (TDR). This means that such properties may send some or all of their qualifying development capacity to other properties (receiving sites) in Uptown that are eligible to use TDR credits for additional development capacity. A qualifying sending site must consist of an architecturally historic structure, vulnerable masonry building, or a qualifying open space set-aside.

There are specific conditions on determining the eligibility of historic structures to convert existing square footage into TDR credits that may be sold or transferred:

Meanwhile, a vulnerable masonry structure may be eligible to convert existing square footage into TDR credits that may be sold or transferred if the structure will be reinforced and enhanced in such a way that its useful life will be extended by at least 50 years.

Property owners of eligible sending sites may convert their unused or sold development allowances into TDRs credits, which are equal to the total residential and non-residential floor area under the maximum base floor area ratio for the zone.

Special upper-level development standards would apply to the SM-UP 160 zone, as indicated in the following table:

The rezones in Uptown would help implement another part of the Mandatory Housing Affordability (MHA) program that is progressively taking shape across Seattle. SM-UP rezones would generally fall into the “high” category for MHA requirements outside of Downtown and South Lake Union. Performance and payment requirements differ by development type and development capacity change (i.e., intensity of rezone change). Developers will be able to choose whether they develop affordable housing or pay a fee to the City.

So in sum, this is the zoning and urban design proposal offered by OPCD. Since it is a draft, there is likely to be some minor changes made to it before a final version reaches the City Council later this year.