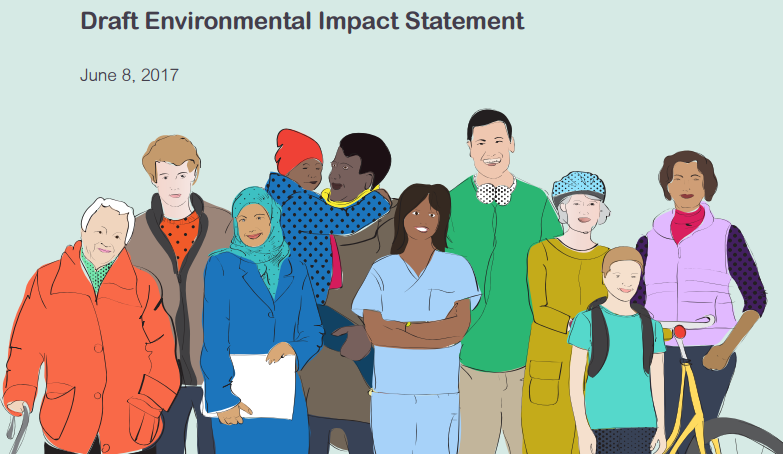 The City released a large study about implementing Mandatory Housing Affordability (MHA) in all of the city’s urban villages, some urban centers, and many other commercial and multi-family residential areas outside of them. The study provides three alternatives, one of which is no change (legally required under the Environmental Impact Statement process). The alternatives though aren’t offered with the intention that one will be adopted. Instead, they illustrate how different kinds of changes would create different impacts. Below are some of the interesting data the City released about the affects of these two alternatives.

There Are Big Changes To Some Single-Family Residential Zoning

The City is upzoning single-family residential areas within all the urban villages and urban centers. In addition, the alternatives indicate a few areas zoned for single-family residential that could be upzoned outside urban villages and centers as well as some opportunities to expand urban villages and centers. Overall, this is a huge win for urbanists who generally think upzoning single family areas can create huge benefits. It’s a key reason many of them supported the policy to begin with. Below are the changes to the Ballard Urban Village.

At the heart of this strategy is a proposition. The city can upzone neighborhoods and capture the value from upzones for the public benefit. Urbanists tend to think density in itself adds value to neighborhoods. For that reason, the increase in expected households is probably enough all by itself to support the program.

Additionally, both alternatives will see much larger growth in rent-restricted units, which have a number of benefits. People can access neighborhoods with high base rents due to the bid-rent curve. People also have way more housing stability akin to rent controlled units. How is it possible we can create so many rent-restricted units? Again, the city is capturing the value from upzones to create public benefits. Since it’s an election season, it’s also worth noting that opposition to HALA and the grand bargain has been widespread. These talking points ignore the benefits when framed simply as opposition rather than needing to do HALA and more. Developer lobbyists and their sympathizers feared it would kill development. NIMBYs said the policy was being pushed by developers and the rich. They also said it would destroy neighborhoood character and displace people.

Regarding displacement, Senior planner Geoff Wendtland indicated, “This was a key concern with MHA implementation.” A lot of the study is focused on how the alternatives will affect displacement because that was what residents have been focusing on. Perhaps the most interesting take-away regarding the relationship between displacement and development comes from this graph: 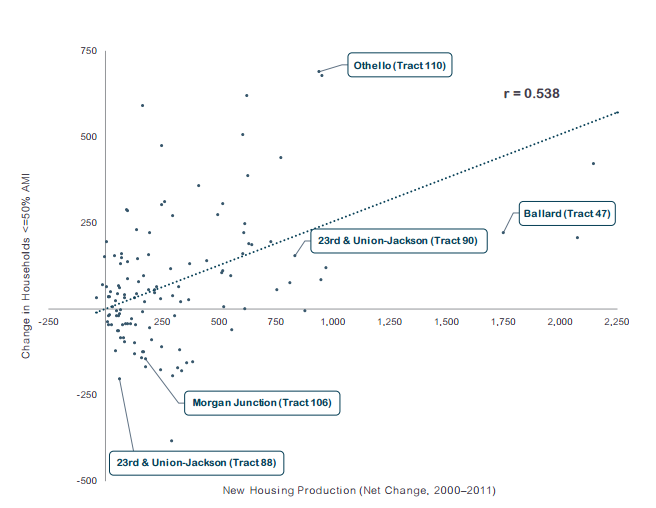 It shows that areas with more development correlated with an increase in households below 50% of the area median income (AMI). This is similar to a study from California that indicated neighborhoods with development saw less displacement. Urbanists should use some caution though with this data for a few reasons. The California study was later addressed by UC Berkeley’s Urban Displacement Project as being a simplification. In Seattle’s example, it’s easy to see how this graph alone doesn’t include all the necessary nuance.

Some details are worth noting. First, the correlation is significant but small. Second, Seattle’s AMI has changed dramatically since 2000 and it’s unclear how the methodology accounted for this. Third, cities are extremely dynamic and interconnected–the same thing that causes a decreases in low-income households in one neighborhood could cause increases in another. Overall though, this is a good evidence that development doesn’t necessitate or equal displacement and might even counter displacement in some situations.

It’s a commonly held (and factual) belief that density is good for the environment. However, adding people to the city does mean we’ll be increasing emissions within the city. Of course, the increase in the city is likely much smaller than if people lived outside the city, but there will still be an impact on air quality.

There’s a lot more analysis in the report that deserves attention, too, but overall it paints a clear picture. Growth has impacts on our city. We need plan to plan and mitigate those impacts. The MHA implementation in the urban villages and urban centers will go a long way towards mitigating a big part of the impacts.