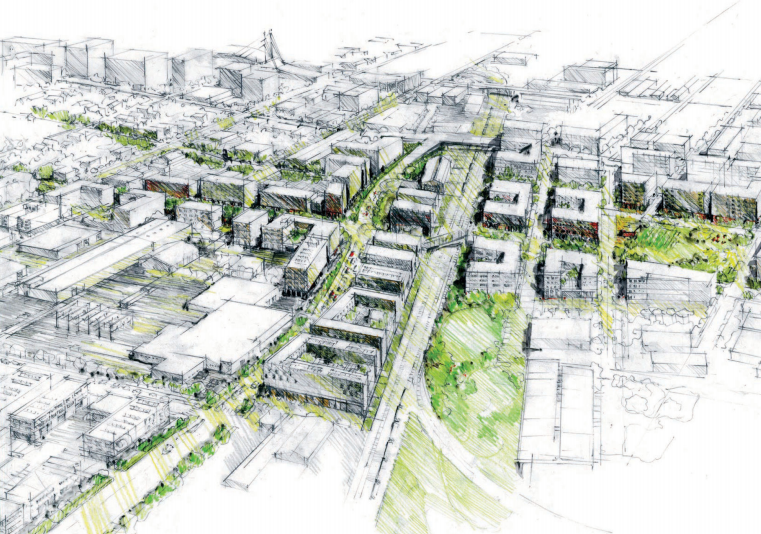 Everett has released draft recommendations on zoning and building height regulations and parking strategies for its city center planning process “Metro Everett.” The draft proposal contains concepts that would completely reform the approach to how development is regulated in Metro Everett.

One of the key proposed changes involves consolidating the many city center zones into three general zoning categories. Specific development regulations would be layered on the three broad zoning categories by requiring compatibility measures for less intensive zones, such as stepping down heights in proximity to zones like single-family residential, and prescriptive design requirements by zone and building typology. Additionally, the general zoning categories would have a height suffix that would act the primary control on density and scale.

To put the proposal in context, Everett is expected to grow by 60,000 residents over the next 20 years. Somewhere between 8,000 and 13,000 new residents are anticipated to move into the city center by 2035, nearly doubling the population in Metro Everett. Over the same time period, jobs are expected to jump in tandem with housing and population growth putting pressure on development capacity. Transit service in Metro Everett will also greatly improve with changes to bus service by Everett Transit and Community Transit as well as the introduction of light rail service to the city center by 2036.

Approximately a third of Metro Everett is recommended to be zoned Urban Residential, which would act as a transitional zoning type to single-family residential areas. Residential uses are intended to be the predominate development pattern throughout the zone, though there would be limited allowances for non-residential uses such as offices and medical clinics when incorporated into a mixed-use building. While there is no proposed density limit on the number of units that would be allowed, other development regulations would act as de facto density limiters, such as parking requirements, setbacks, maximum building heights, and landscaping requirements.

The Urban Core zone is proposed to encompass more than half of the Metro Everett area. It is intended to serve as the densest and most diverse set of uses with a particular emphasis on commercial and cultural activities. Importantly, it would provide significant capacity for future residential and employment growth expected in Everett’s city center. The Urban Core zone will also feature a future Link light rail station as part of the Sound Transit 3 expansion program, which will provide a necessary transportation backbone for the district.

Maximum building heights within Metro Everett are proposed to range from three stories to unlimited using a tiered approach. The tiered approach, similar to a wedding cake, is intended transition downward in height from the center to better meld into the one- to three-story character of single-family residential areas surrounding the district. Transitions in maximum heights generally occur mid-block or at alleys to help soften jumps in building heights. Maximum building heights would be broken into two categories: a base maximum and an incentive maximum.

Bulk regulations, such as upper-floor stepbacks and floorplate maximums (as noted in the table and depicted in the diagram below), are proposed to be used as a way to ensure that solar light filters down to the ground and reduce impacts to views that can come with large, bulky buildings. Modulation would be required for buildings that are greater than 200 feet in width. Required setbacks and building location would also apply based upon the streetscape type, zone, and building type. In certain cases, lot coverage maximums may be used as a means to control development density on sites.

Floorplate maximums would differ by height. For instance, between the first and fourth floors, there would be no maximum floorplate meaning that a building could occupy the entirety of the lot area below it. From the fifth through eighth floors, the floor area of each floor could only occupy 85% of the equivalent lot area meaning that some space would go unused by those portions of a structure. Floors beyond these levels would increasingly be restricted in the kind of floorplate that could be achieved and in no case could a structure have a floorplate great than 10,000 square feet for the floors above the fourth story if the building is a high-rise (i.e., taller than 15 stories).

The proposal would also require that new development in the Urban Residential and Urban Core zones achieve a minimum amount of building height and floor area. In both cases, a minimum building height of two stories would be required to guard against under-building and help deliver better overall urban design through development patterns.

In term of building height and floor area incentives, developers would be able to unlock extra space over the base maximum using a mix of public benefits. Options that could qualify include public benefits, such as: affordable housing, historic preservation, public art, and public space. In some cases, a developer could make a fee in lieu payment instead of formally developing a public benefit on-site or off-site. The incentive options would differ for residential and non-residential development, as noted in the tables below. Importantly, the extra floor area would directly relate to the amount of floor area dedicated to public benefits.

Using the incentive options for extra space, a development would need to be certified under LEED (a very green environmental building rating system) or a similar rating system and develop a Transportation Demand Management plan to provide multi-modal transportation choices as part of the project.

The proposal would also establish a transfer of development rights (TDR) program that could be used to protect historic buildings, upgrade vulnerable masonry buildings, and develop open space. Properties that participate in the TDR program could then sell TDRs to developers who may want to use the TDRs to gain additional floor area and building height as part of developments within the Metro Everett area.

Finally, other more prescriptive development regulations associated with each zone and building type would apply to ensure that things like commercial ground floors have adequate building height, a building is located on a minimum lot size so that it can be effectively constructed, and that parking is located in an appropriate location for access (see Appendices A1 and A2 in the PDF below).

The development regulations are designed to function similar to form-based codes by focusing on how development should be designed instead of strictly controlled by use.

Lastly, the recommendations include a variety of proposals that could address parking. These include:

The proposal also suggests that on-street permit parking could be expanded, additional changes could be made to on-street parking policies in certain areas of Metro Everett, and parking related to the future light rail station should be structured away from the station.

The City of Everett plans to hold an open house on the draft plan for development regulations tonight (Tuesday, June 13th) from 6pm to 8.30pm at the Everett Performing Arts Center. The proposal is also open for general comment either through an online forum or contacting the project manager, Niels Tygesen.