The City of Everett is working through a major downtown area masterplanning effort dubbed “Metro Everett”. The plan is taking a broad look at how the urban core of Everett will grow as a district over the next twenty years. Stretching from I-5 to the Port of Everett and as far north and south as 24th Street and 36th Street, the district comprises about a one square mile area. Approximately 7,000 residents reside within the Metro Everett area, which constitutes nearly 6.5% of the city’s total population–estimated to be about 108,000 residents city-wide.

Over the past 10 years, more than 1,000 new housing units have been added and planners anticipate that another 1,000 housing units will be built over the next decade. Everett is targeting 60,000 new residents city-wide over the next 20 years with 8,000 to 13,000 planned to move into the Metro Everett area. If all goes to plan, Metro Everett’s population share will grow from 6.5% to a whopping 12%.

The Metro Everett area has a broad spectrum of zoning in place. Most of the downtown core is principally zoned as B-3, a mixed-use zone with an emphasis on commercial activities. Maximum building heights range from 45 feet to more than 200 feet, but there are specific controls on the amount of building square footage for B-3-zoned lots through FAR minimums and maximums.

Closer to I-5, C-1 and C-2ES zones predominate with 97-foot and 80-foot height limits respectively. The C-1 and C-2ES commercial zones allow for mixed-uses like retail and multi-family residential, but also permit some types of light industrial uses, which are still observed throughout the zoned areas today. On portions of Broadway, a corridor of BMU zoning is in place to allow a mix of general commercial, retail, hotel, office, and residential uses. The zone doesn’t contain any maximum density controls, but limits building heights to a maximum of 85 feet.

Zoning and development regulations could be modified as part of the Metro Everett masterplanning process to further incentivize and allow infill urban development, and to ensure that future residents, visitors, and employees are better served by new development.

The plan lays out a bold proposal for future transit. The draft action strategy lays out conceptual plans for a new light station closer to the downtown core (Broadway and Pacific Avenue) with a busway (via McDougall Avenue) and new multi-modal bridge span on Pacific Avenue. Everett already has a train station, but it is situated at the far reaches of the Metro Everett subarea, south of Pacific Avenue and east of Smith Avenue. Walking times to the heart of downtown (approximately Colby Avenue and Hewitt Avenue) are in excess of 15 minutes, even for the fastest of walkers and includes a walk up and down steep hill grades. A variety of bus lines operated by Everett Transit do connect up to downtown, but at infrequent and uncoordinated times with Community Transit and Sound Transit services. And the popular Swift Blue Line skirts the southern end of the downtown core, limiting direct access from a very frequent line.

The McDougall busway would deliver direct access for buses between downtown and the upper end of the Broadway corridor to the proposed light rail station and existing Everett Station transit center, eliminating some impediments to bus reliability, particularly in a much denser and likely more congested Metro Everett. Other improvements could be coupled with the plan, like two pedestrian bridges over Broadway and another three over the railway tracks east of Smith Avenue.

The map below gives additional details of the many transit-related investments and strategies that could be employed:

Of particular note in the map, beyond the concepts for transit service, are pedestrian activity and transit-oriented development (TOD). Planners have identified where future development and possible investments should employ pedestrian-oriented designs and infrastructure. Much of this is focused on McDougall Avenue and 32nd Street, but the concept map recognizes that other streets will likely serve as important pedestrian corridors and nodes. West of Smith Street, the concept map calls out six blocks that could provide significant TOD investments between both Everett Station and future light rail station. On the other side of the tracks, planners envision redevelopment of the 10-acre Lowe’s Home Improvement site for TOD as well, which could entirely transform this part of Everett into a vibrant, connected urban district.

And interestingly, the park-and-ride lots associated with Everett Station could be consolidated to one parking garage east of the station. That would mean light rail riders who might drive to and from the station would be at least a three-block walk away from their cars. Some may grumble, but it could improve placemaking and spur better mixed-use projects at the station area.

Traditionally, Sound Transit has worked closely with local jurisdictions on identifying the precise location of transit facilities and light rail alignments. Recent examples include the laying the groundwork for a NE 130th St station in Seattle, the Downtown Bellevue station and tunnel alignment, and extension of light rail to Federal Way. Everett’s overall transit concept east of Broadway will likely be given serious weight as both the Metro Everett and Sound Transit 3 expansion plans move forward.

Planners at the City of Everett are currently working toward a final recommended subarea plan for the Metro Everett Plan to be issued in 2017. The plan will detail specific strategies and paths to realize the goals and objectives for the Metro Everett area over the coming decades. The Everett Planning Commission and City Council will both have an opportunity to review the plan and proposed actions prior to adoption. Final adoption is anticipated somewhere toward the middle of 2017.

UPDATE (1/9/2016): City staff have indicated that the City is no longer likely to pursue an EIS for the Metro Everett plan.

I’m guessing this station placement is the result of ST3 going up I-5 rather than evergreen way. 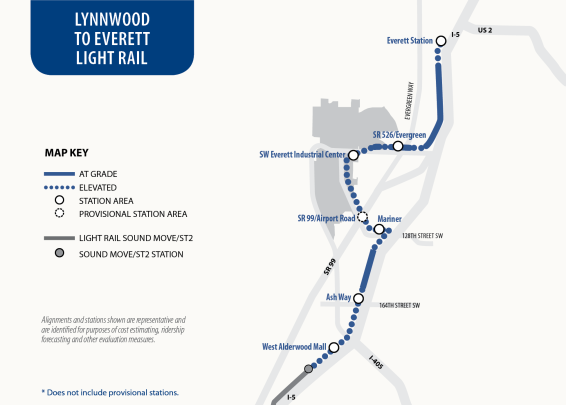 It would make sense that the planning work is indeed based off of that, given that ST Board of Directors approved that general alignment for ST3.

But even if ST (assuming they could change the terms later) did go up Evergreen Way, it appears that the Everett station concept could still work as the LRT alignment (I believe) turns onto 41st Street. 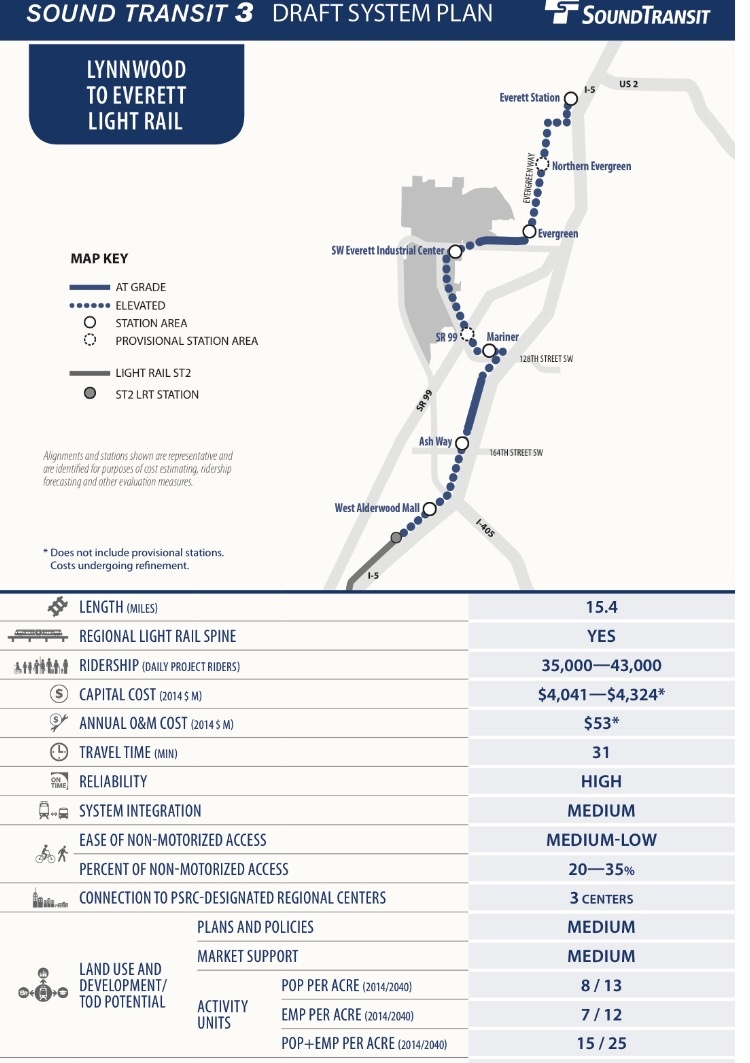 If you’re looking for a slate of bold progressive urbanists up to the task of the housing and climate emergency, we’ve got them. Read our General Endorsements here.

ABOUT US
The Urbanist serves to examine and influence urban policies by promoting and disseminating ideas, creating community, and improving the places we live. Founded in 2014, the organization provides daily news coverage and opinion in the advocacy journalism tradition along with social and educational events. The Urbanist is based in Seattle and registered as a nonprofit 501(c)(4) entity.
FOLLOW US
Except where noted otherwise, all content is licensed under a BY-NC-SA 4.0 license.
wpDiscuz

We need your support.

The Urbanist is an award-winning advocacy publication that overwhelmingly depends on donations to do our work. We need generous readers like you to become subscribers. We’re running a two-week subscriber drive and urging you to become an ongoing donor.