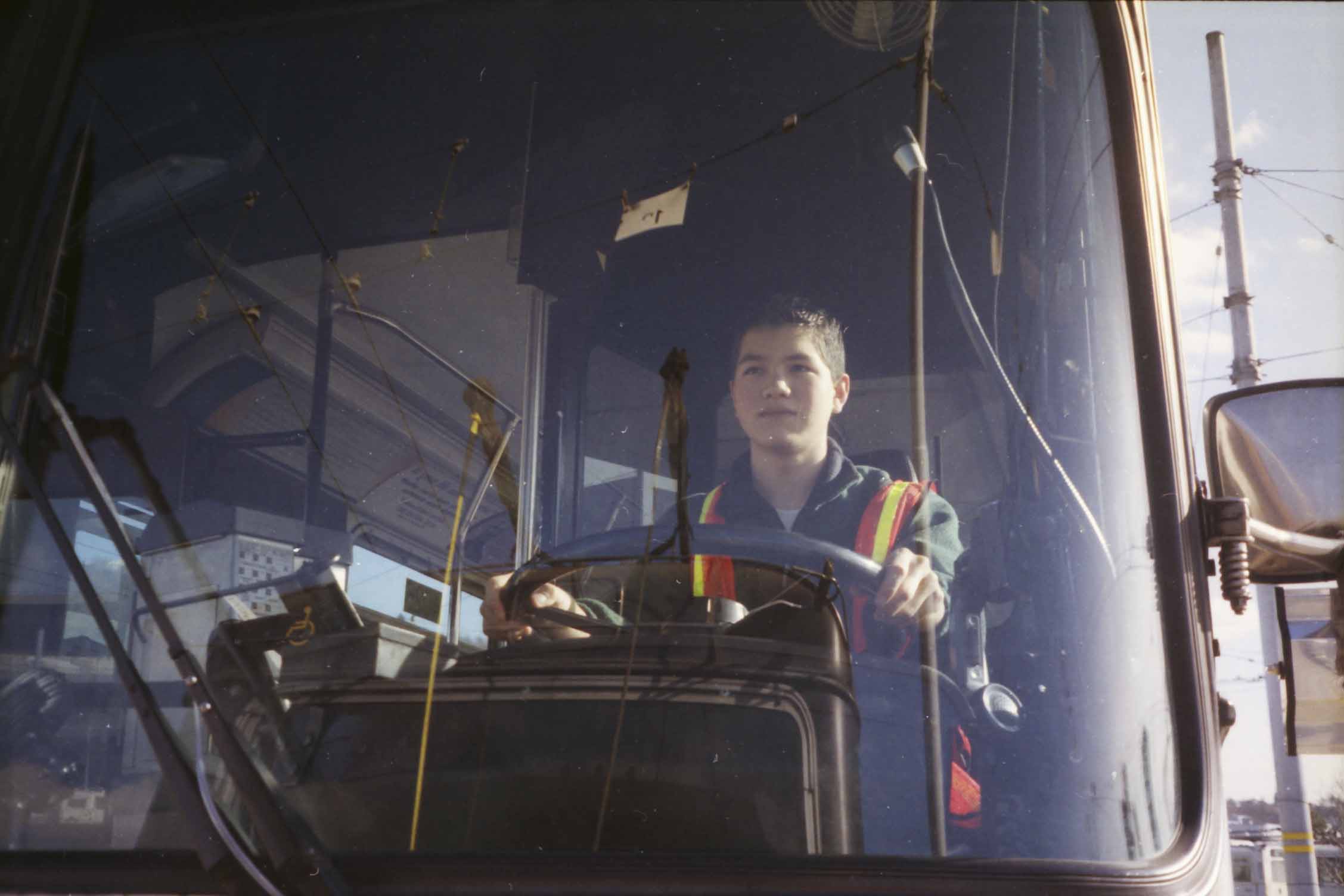 That’s me in the picture above, at thirteen or fifteen years of age, sitting behind the wheel of a 4000 in the Atlantic Base yard (another angle of the same here, tied with a story of one my earliest formative bus-riding memories). What was I thinking about, in eighth grade? I’m wearing a green Old Navy fleece there, new at the time. It still fits me.

On Sunday–July 2nd–was the exact ten-year anniversary of my bus driving career. One Monday afternoon a decade ago I took out a 250 from Bellevue Base and drove it from Seattle to Redmond. The entire shift was two hours and twenty minutes, and though the route went on the freeway I doubt I once went over forty-five miles an hour. I looked like this (note the fares!): 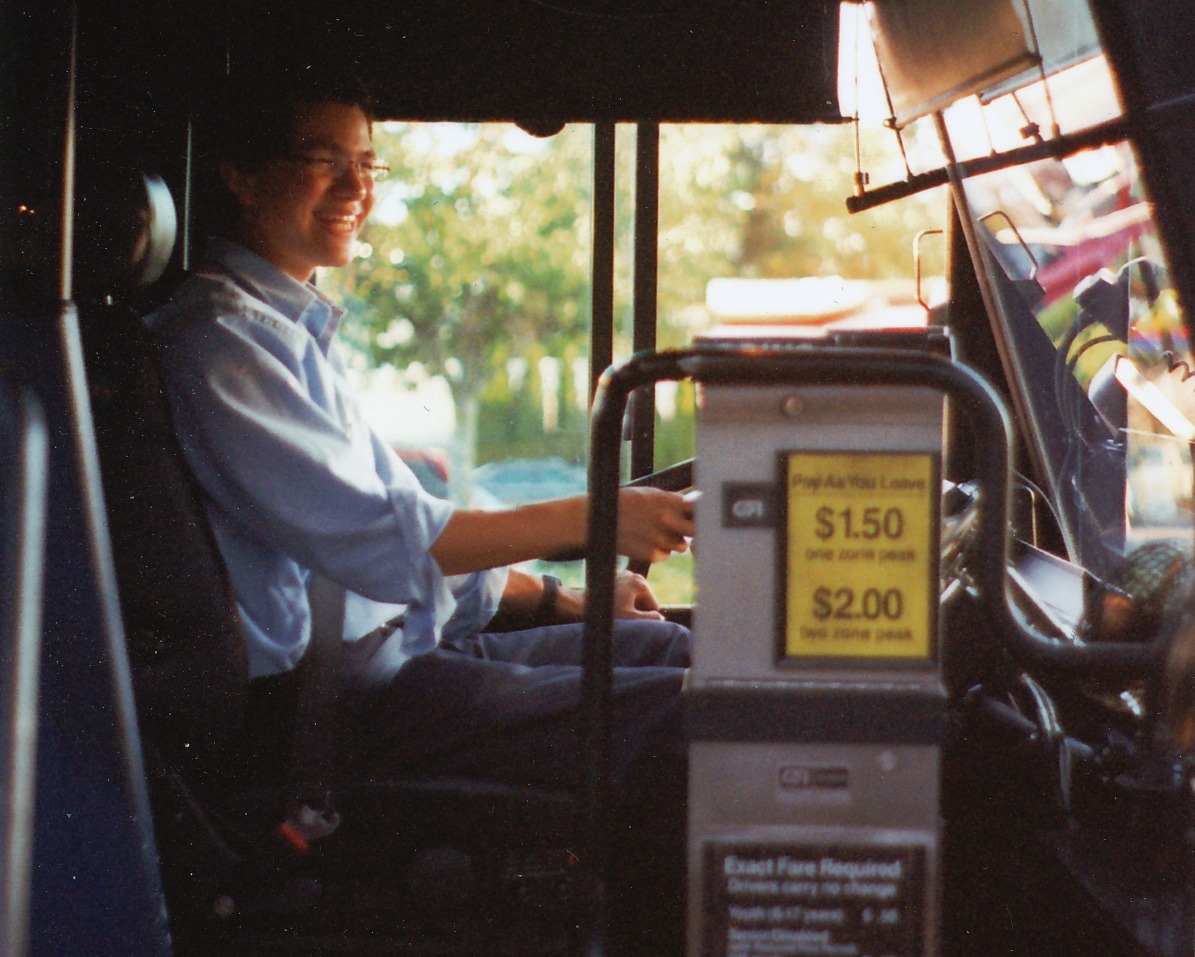 ​My father took the photograph, which dates from later that week. I’ll never be able to express the level of degree I have for him taking the time to come out and surprise me with a ride, documenting it with the family camera. This wasn’t just another job. It was the culmination of a lifelong passion.

Hang on, you’re thinking. A lifelong passion? What? From someone who ran a wedding photography business, got multiple films into festivals, traveled the world, and has had thirty-odd art shows?

Sometimes we love quickly, without knowing why; or the reasons change across the years, even if the feeling remains.

Do you remember what it was to ride the bus as a child?

There was no pop culture in our home growing up: there were books aplenty but no TV, magazines, radio, newspapers, or films… secondary and tertiary representations were minimized in favor of pure, unadulterated direct experience. I was filled with a hunger insatiable for being close to life; give me that which is tactile, authentic, unadorned. Take me to the leading edge.

I went through a phase where I’d borrow my father’s bus pass. It represented a level of freedom analogous to a library card, only this knowledge was firsthand. I rode all over town. At twelve I branched out of the ‘burbs and began riding into Seattle alone–sometimes with the camera, but often with just my eyes. I quickly discovered the journeys were frequently more interesting than the destinations.

Woody Allen once wrote that a city, due to its complexity, could never fully be captured in a work of art; there’s just too much detail, too many moving parts. It was this variegated complexity that thrilled me so. I was a shy child, more participant than observer, and observe I did, in every corner of the metropolis. Our city is well-suited for this; Seattle’s neighborhoods are stark contrasts from each other, self-enclosed enclaves of income level or ethnicity. It reminded me of L.A., this place that reveals itself in layers. The more time you spend in the Emerald City, the more you discover.

I rode through the safest parts of town, and more often through exactly the opposite; I was too unobtrusive to pose much notice in such areas. There was more verve and color out here (not to mention better bus service), where lives were not so sequestered from each other, and compassion carried greater currency. Certain images have burned themselves into my memory:

-The early morning 7 runs carrying the blind workers down Rainier Avenue; I smiled in the darkness, listening to their jovial banter. They lit up the night.
-Elsewhere, a young Indian housewife vomiting silently into a paper bag, upset by the driver’s careless starts and stops. She kept to herself, demure and uncomplaining.
–This exchange.

I watched people help each other, or avoid doing so. I saw the smiles of runners who made the bus, and felt the disappointment when I missed a connection. People went out on the town; they came home from work.

The older coaches in use had a different character than the newer equipment we see now. Evidence of time was everywhere– faded metal, peeling paint, vandalism, the smells of decades past. Seats were designed for appeal and comfort, not cost savings. You looked out through scratched windows at history, advancing and receding with each new block. Nothing was computer controlled; the texture of sounds was different. We were in the era before hums and beeps. One rather heard the pressure release of opening doors, oiled joints creaking, the snap of switching wire; mechanical parts sliding against each other, dynamic brakes and engine retarders singing their fluid song. Everything was real.

All this to say, that amongst the beautiful life with my parents, and the world of school and friends, I found solace in this vast human maelstrom. In time, as adolescence and adulthood drew nigh, joyriding through the city got pushed aside in favor of other concerns…but how could I forget those formative days?

So many turning lives, such incredible detail, everywhere. The bus came to represent for me something very different than what I imagine it means for others. My classmates knew humanity through their friends and parents. I knew it through those avenues, but also through the journeys of the untold thousands, faces and lives I’d seen up close, strangers behaving just as I do, loving, breathing, laughing, and dying, commonalities crossing over age and language, culture and status. I could never bully anyone now; I’d seen too much of the lives of strangers to consider anyone the “other.”

A fundamental truth emerged, and I didn’t know its name until years later: I am surrounded by friends, and I share some common ground with every person on this planet.

The primary sensation I have today, upon reflection, is gratitude. These folks have taken me in, accepted my enthusiasm and the currency of respect. A man on last night’s 7 asked how everything was in my life.

“Good, it’s been good,” I replied. “We just had the shakeup and all the other drivers picked new stuff, but I stayed right here, man, same time same hours, same days,”
“You like this number 7, huh?”
“I know too many of the folks to leave!”
He grinned. “You one of us, man. You part of the ‘hood now!”

I never guessed it could turn out like this. My art career means a lot to me, but so too is there something special about all this bus stuff. I felt like an anomaly as a child. I imagine most of us do. But now, to be appreciated on this level, by the masses who I grew up riding with and the masses who read my website and you fine, lovely masses who read The Urbanist, who care about housing and transit and equity and the human element of urban life…I always thought my perspective was a minority one. I’m so thankful to discover how many of you loving people there are.

Thanks for reading and riding! 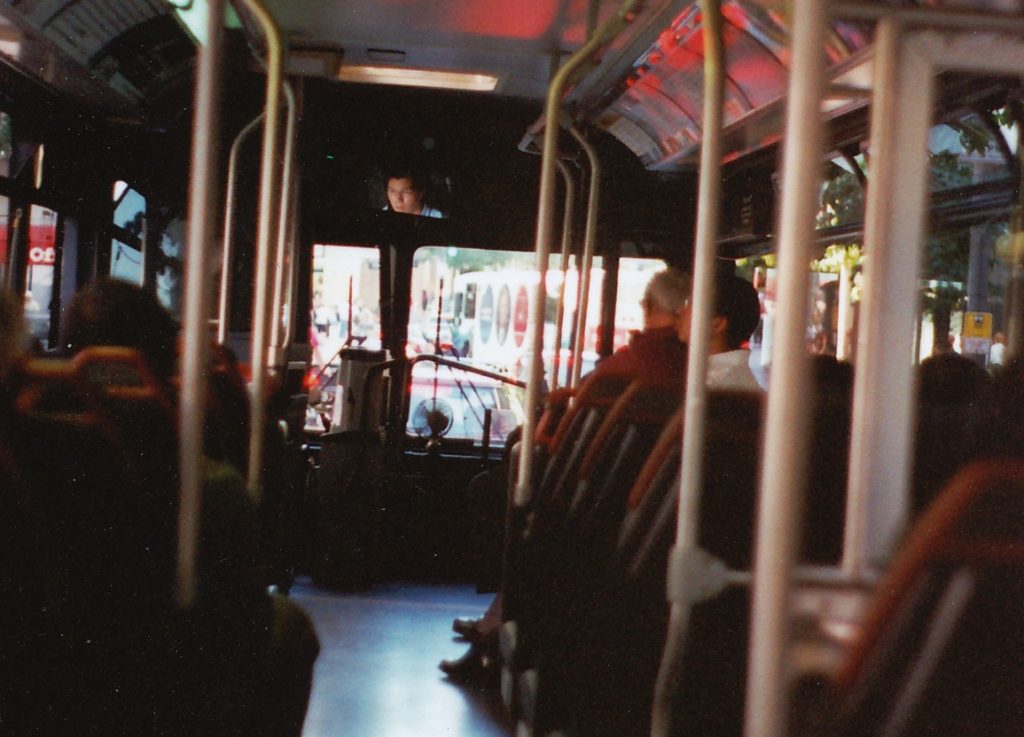