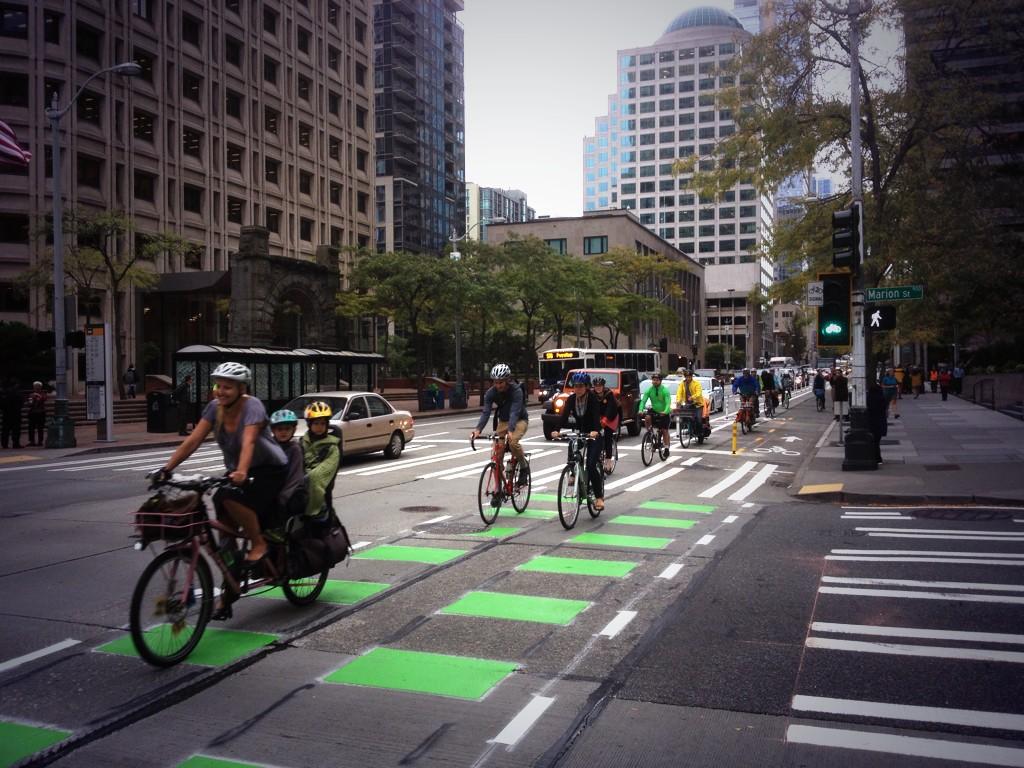 When the three transportation agencies involved in the One Center City plan–King County Metro, Sound Transit, and the Seattle Department of Transportation (SDOT)–presented their recommendations for near-term improvements in Downtown Seattle, one of the most hopeful items was a clear plan to connect Downtown with Capitol Hill with protected bike lanes–and fast.

The Capitol Hill to Downtown connection is the most critically needed piece of our downtown bike network. With the north-south corridor on Second Avenue in place and getting extended north to Belltown as I type this, an east-west connection will create an All Ages and Ability network across a big section of Downtown. Not even paint-only bike lanes connect Second Avenue and Broadway right now–paint only lanes start around Eighth Avenue heading east but disappear around Boren Avenue to make way for turn lanes.

The plans presented at the June meeting of the One Center City advisory board showed that the near-term recommendation was to install protected bike lanes as a couplet–eastbound on Pike, westbound on Pine–between Second Avenue and Bellevue Avenue in 2018. SDOT didn’t promise completion of the Bellevue to Broadway section until 2020. While getting to Broadway will truly complete the network, completing the segment to Bellevue Ave meant a critical tricky to navigate segment would be bridged around Boren Avenue, where cyclists heading downhill currently have to wedge themselves between a right turn lane and the forward travel lane.

SDOT has revised the materials that were circulated during that meeting, and does not plan to implement any protected bike lanes east of Eighth Avenue until 2020. They are attributing the mistake to an error on the map, and not to any change to their decision on near-term recommendations.

In addition, all maps on the center city network show the one-way couplets on Pike and Pine extending all the way up to Broadway, even as both of those streets become two-way for car traffic on Capitol Hill. At the Sustainability and Transportation Committee meeting in late June, however, SDOT Director Scott Kubly informed the committee that east of Eighth Avenue both directions of bike traffic would be on Pine Street, where there are already paint-only lanes in both directions on most blocks.

According to One Center City project lead at SDOT Eric Tweit:

SDOT will be analyzing options for the bike lanes on Pike and Pine between 8th and Broadway through the project development and design phase.  I think Scott’s comment re both directions on Pine was referring only to the existing bike lanes.  The One Center City recommendation is to extend the bicycle couplet on Pike and Pine streets and determine the preferred configuration and operation for buses and other traffic through design development and outreach.  SDOT’s Bicycle Program team will be evaluating options beyond the One Center City recommendations as they initiate conversations with stakeholders and community groups and hear what else needs to be considered.  They plan to ramp up outreach on the 8th to Broadway segment this Fall.

In other words, with the outreach process for protected lanes on Pike/Pine on Capitol Hill in early stages, there is not a clear picture of how exactly the network will connect to the lanes planned for next year.

The one thing that is off the table by most accounts is a two-way cycletrack on either street like we have on Broadway and Second Avenue. Creating a cycletrack on a street with a grade like Pike or Pine would encourage faster speeds for cyclists through intersections and be bad for safety. At this point, the questions left to be resolved are going to revolve around how much parking would be removed to make way for each option, and how to avoid conflicts between buses on Pike/Pine and the bike lanes. The couplets on different streets are most likely the best compromise option in both cases.

As for the other bike network component of the Center City Bike Network, the north-south bike lanes, the agencies are still deciding on whether to recommend a couplet on Fourth and Fifth Avenues or a two-way cycletrack on Fourth Avenue. The agencies are considering how much travel time for buses on Fourth would be impacted by the left turn signals that would be necessary to install next to the bike lanes in order to reduce conflicts between bike riders and turning drivers.