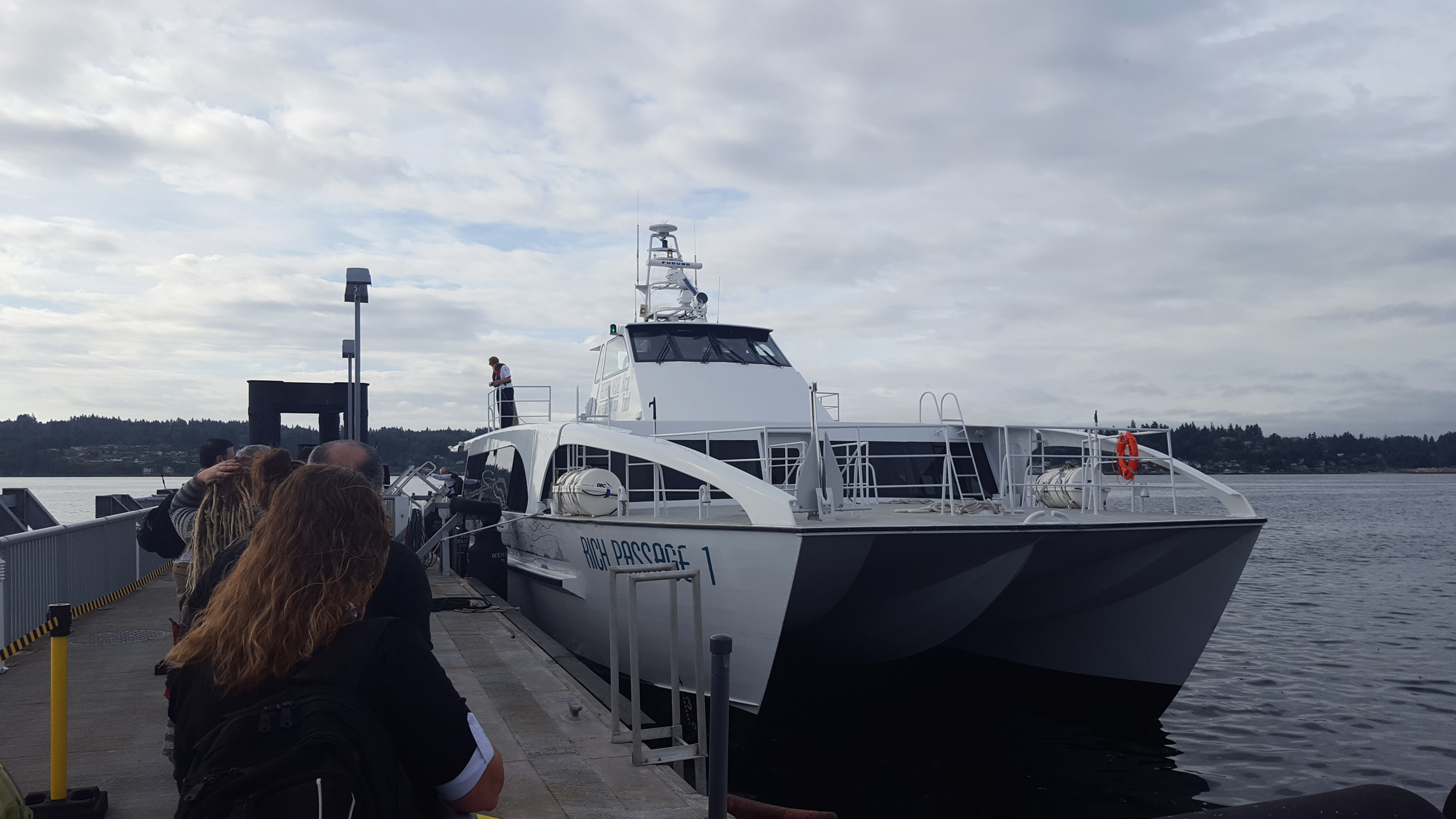 On Monday, Kitsap Transit’s new Fast Ferry officially started operations between Seattle and Bremerton, offering a faster transit option for commuters and visitors. First impressions on the initial ride were favorable, but the service has a number of kinks to work out before it can be a positive force for change in the Puget Sound region.

We traveled one-way from Bremerton to Seattle on the 8am trip. Coming from the Port Orchard foot ferry with a crowd of commuters, the transfer to the connected fast ferry queue should have been easy–but the first issue was that passengers were manually checked in one level upstairs, causing confusion for some and an unnecessary detour for anyone with mobility difficulties. Further, when shown the reservation document on a mobile device, the Kitsap Transit staffer asked instead for a “ticket” that was never e-mailed.

Thankfully, they had a printed reservation list and were able to check us in without further issue. All trips through July are free, and starting in August passengers will pay with cash, a monthly pass, or ORCA card when they check in.

Unlike the rest of the Bremerton ferry terminal, the designated waiting area for the 118 fast ferry passengers is exposed to the weather. Protection from sun, rain, and wind, along with exterior lighting, needs to be installed as soon as possible to ensure not only comfort but also safety on the floating dock. This will become an obvious issue in the dark winter months ahead.

But on Monday the sun was shining and a light breeze didn’t bother the waiting crowd. The Rich Passage I showed up in time to discharge a load of commuters from Seattle, and the crew displayed practiced efficiency in managing the lines and gangway.

On board, the seating is similar to a widebody airliner–rows of grouped seats with armrests packed tighly together. If you’re confident you won’t need to move about, head for an interior seat so you don’t need to get up and down to let people out during the trip. There are several tables at the rear for groups or people who want to get in some work during the commute.

Otherwise the cabin is fairly simple, with single-occupancy restrooms towards the stern and no access to the outdoors during the trip. This could become an issue with the cabin’s apparent tendency to get warm, especially near the bow. The passenger area is also not as soundproofed as some may prefer, as the vessel’s jet engines are quite loud and stifle any attempts at quiet conversation or even a phone call.

Compared to a Washington State car ferry, riders will delight at the speed with which the boat leaves Sinclair Inlet and transits Rich Passage. This is by design, as at top speed the catamaran vessel utilizes a hydrofoil to lift almost entirely out the water and minimize wake. Once through, however, the boat slows down to a relatively lukewarm cruising speed to conserve fuel on the rest of the way to Seattle.

Oh my. We are cooking! pic.twitter.com/BJUNp8p88C

Approaching Seattle, the advertised 28-minute trip turned into 40 minutes as we waited for a King County water taxi to depart and open up a docking space. John Clauson, Kitsap Transit Executive Director and Port Orchard City Councilmember, said there are no plans to expand the water taxi facilities as part of the Colman Dock rehabilitation. He said the problem will be exacerbated in a few years when five passenger-only ferries (the existing West Seattle, Vashon Island, and Bremerton routes plus the future Kingston and Southworth routes) are jockeying for position as commuters try to get to work at the same time. In the absence of a commitment to fund a dock expansion, King County and Kitsap Transit must work to better coordinate schedules and streamline the boarding and alighting process to reduce conflicts.

Overall the new service seems to work well, and with a few adjustments for passenger efficiency and convenience it’ll be ready for expanded operations in the months and years ahead. If the early results are successful, Kitsap Transit will complete its current negotiations with All American Marine of Bellingham for at least two additional boats of the same class. Service may also be beefed up on express buses serving the Bremerton terminal, which some ferry passengers took advantage of. Kitsap Transit’s other looming challenges are providing more robust bus service countywide and filling the void of transit service on Sundays.