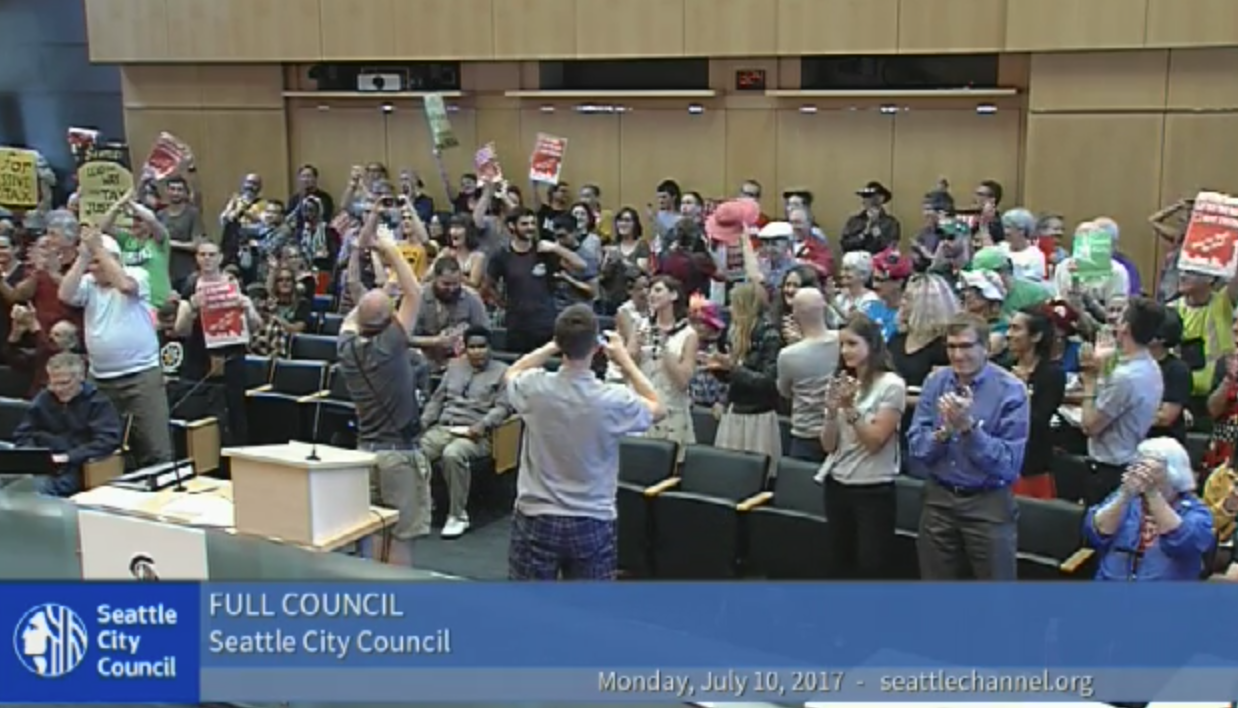 Seattle is on its way to getting its own income tax. Yesterday, an ordinance to institute a tax on high-income earners passed out of Council chambers and appears headed for approval by the Mayor. Separate legislation also passed to update the City’s Rental Registration and Inspection Ordinance and revise an agreement with the Seattle Housing Authority on terms for redevelopment of Yesler Terrace.

The income tax is expected to apply to only about 5% of Seattle’s households, or some 8,500 households. Revenues from the tax are anticipated to be $140 million in the first year, though the tax will be somewhat volatile due to income changes over time. Proceeds from the tax are to be focused into six key areas:

During the Council meeting, Councilmember Lorena González offered an amendment to the bill. The amendment centered on reducing Business & Occupation (B&O) taxes in the city and how they might be one of the taxes reduced. There was disagreement by some Councilmembers on the broad scope of the amendment, but Councilmember González said that B&O tax reductions should be focused on small local businesses. The amendment passed on a 6-3 vote.

The law is widely expected to be appealed and end up in court–though proponents expect to successfully prevail under the state’s law prohibiting net income taxation since the legislation taxes gross income. Proponents also believe that the State Supreme Court will rule favorably on the tax measure with regard to tax progressivity.

An ordinance to strengthen and overhaul Seattle’s Rental Registration and Inspection Ordinance (RRIO) also passed. The ordinance will make a variety of key changes to how residential rental buildings and units are inspected:

The changes will be reflected in the standard RRIO checklist and codified in the RRIO and Housing and Building Maintenance Code ordinances. Other technical changes related to RRIO and housing maintenance standards are made under the ordinance. Last month, Heidi Groover over at The Stranger shared personal stories about how the RRIO program was not addressing serious health and safety issues of tenants. The changes that passed the City Council should result in better conditions for renters across the board, but particularly in older structures that may not meet modern building code requirements.

In May, the City agreed to a major amendment to the Cooperative Agreement between the Seattle Housing Authority (SHA) and the City of Seattle for redevelopment of Yesler Terrace. Two months on, another amendment to the Cooperative Agreement was requested by SHA to facilitate the development of more affordable and low-income housing development and make other targeted changes to the agreement. The changes of agreement terms include:

A new third phase (Phase III) for housing production has been added to the Cooperative Agreement. The added phase will commit SHA to development of at least 420 affordable and low-income public housing (LIPH) replacement units. 263 of these will be LIPH replacement units. Another 157 units will be targeted as affordable housing units for households at or below 60% of the area median income. Development of the housing will be across four separate multi-family housing projects.

One of the Phase III projects includes a site east of Boren Avenue right across the street from Bailey Gatzert Elementary School. SHA will develop at least 190 LIPH units on the site, an increase of 50 such units from the original plan. As part of the project, SHA plans to provide a mix of family-sized units and will consider the inclusion of preschool classrooms that would facilitate the City-backed Seattle Preschool Program. The classrooms are contingent upon capital funding from the the City.

Total development costs for Phase III are estimated to top $250 million with proceeds coming from a mix of land sales, grants, bonds, and other financing tools. Of that, $13 million will be set aside by the City from the Housing Levy for affordable and low-income housing development. The Housing Levy funding will be used for 103 affordable housing units and 195 LIPH replacement units. Disbursement of the funds is fairly prescriptive:

In total, the Housing Levy funding will help develop a total 325 affordable and low-income housing units in Phase III of Yesler Terrace’s redevelopment.

Separately, added language to the updated Cooperative Agreement includes a new community garden (P-Patch) that will be situated between I-5 and Yesler Terrace in right-of-way owned by the Washington State Department of Transportation. The right-of-way to be leased from WSDOT will allow a portion of the terraced landscape east of I-5 to be used for urban farming by SHA residents. If for some reason, the lease is terminated by SHA or WSDOT in the future, SHA will be obligated to find commensurate space within or next to Yesler Terrace for community gardens.

The City Council agreed to the change of agreement terms.