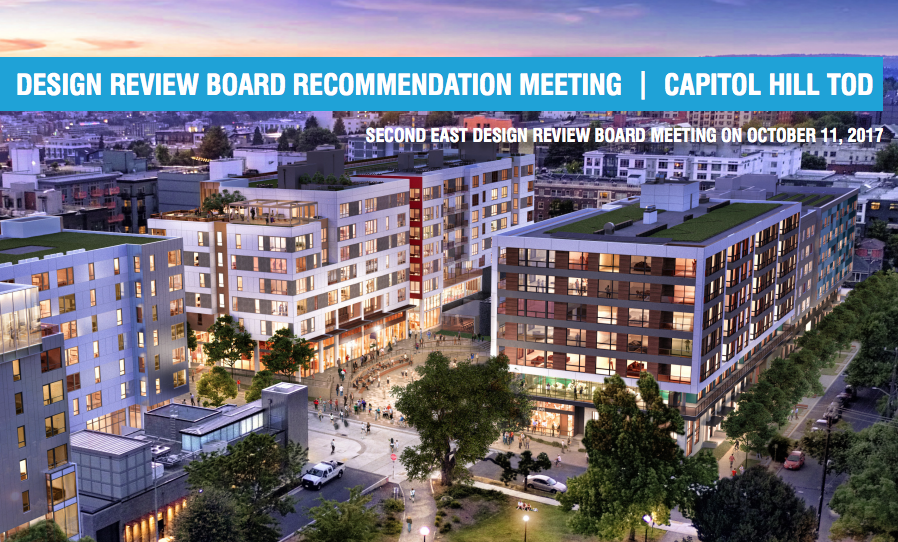 Light rail has revolutionized the way many people get to and from Capitol Hill since its station opened in 2016. But the station will bring more change to the neighborhood in the years ahead. In October, plans for four new mixed-use buildings at the station received design approval from the East Design Review Board. The milestone will help pave the way toward final land use approval for some 428 dwelling units, 176 of which will be set aside at affordable rents. The transit-oriented development will also provide more than an acre of plaza space and 39,150 square feet of commercial and other community uses.

Last year, Sound Transit approved a long-term ground lease of four transit-oriented development (TOD) sites at the station. Gerding Elden was the preferred developer of the project working in conjunction with other local firms and Capitol Hill Housing to deliver the overall project. The design review process kicked off in earnest in late 2016 with Early Design Guidance and proceeding to Recommendation in August. However, the East Design Review Board called the developer back for another review over concerns with the proposed daycare and “austere” checkerboard turquoise paneling for Building B-North. Gerding Edlen and company went back to the design review in October with updated designs.

The largest building in the TOD project will be Building A, which is intended to stretch nearly a full block on Broadway between E John St and E Denny St. The building will share a wall with the north station entrance, but is not planned to cantilever above or be built over the entrance. A market hall will be featured prominently on the ground floor with space for day traders. The building is planned to be partially broken up with a pass-through between Broadway and the interior plaza. Above the ground floor, the building will be programmed with residential uses. 150 dwelling units are planned to span the upper six floors with a full 21% of them rented at affordable rates for households.

Architects slightly revised the building design between the August and October Recommendation meetings. The color palette and upper floors present the most notable changes. The color scheme will be a little lighter than originally planned with a more widely used mustard accent to balance the dark brown and red accents. Designers also added two “lantern” glass boxes on the seventh floor west elevation creating a little more transparency and lessening the feeling of bulk at key transition points in the roofline. On the seventh floor at the southeast of the building, the trellis was given more definition with added columns and darker materials.

At the northeast site, Capitol Hill is sponsoring a 100% subsidized apartment building known as Building B-North. 110 units are planned to be constructed in the seven-story building with Capitol Hill Housing as the chief operator and owner of the building. The units will be rented to households at or below 60% of the area median income. In August, some design review board members felt Building B-North’s architecture failed to achieve the greatness they expected. Board members also bemoaned the use heavy use of checkered turquoise panels.

In October, architects returned to the design review board with a stripped down proposal that consolidated the turquoise checker patterning to a smaller sector on the east facade. That meant entirely removing the boldest turquoise checker pattern from the north facade and replacing it with a muted white paneling. Architects also gave the west facade more definition by employing three strategies:

Building B-South is the smallest building of the bunch. Gerding Edlen plans 74 dwelling units for the structure, with 15 of those set aside as affordable units. Similar to Building A, the structure will have a through-passage at the ground level providing direct access from 10th Ave to the station site plaza. Very little changed in the design since the August Recommendation meeting. Slight changes were made to the ground floor facade and fenestration. A small set of windows were removed from the design and the facade materials for a portion of the structure near Building B-North were swapped out to harmonize the transition from white to black brick.

To the south of the main site, Gerding Edlen is planning to construct Building C adjacent to the Nagle Place station entrance. The building will stand seven stories tall with a mix of commercial and residential uses. A daycare is planned along a portion of the Broadway frontage and would total 6,000 square feet. Architects satisfied the design review board’s earlier concerns of street activation by proposing additional transparency solutions. The remainder of the ground floor is planned to contain retail uses. Upper floors will house up to 94 dwelling units, 20 of which are planned to be affordable.

The overall design saw significant changes since the August Recommendation meeting. In October, architects presented designs showing a much more polished northwest corner at the upper floors. A “lantern” glass box will accent the corner and the northern facade at the same levels will look more metallic. Architects changed the eastern facade, too, using similar features. However, the building mass projecting toward Cal Anderson Park will feel almost as if it is its own building separate from the one fronting Broadway. That’s because of the metallic paneling will be located on all of the viewable facades juxtaposed to the more muted white paneling.

Gerding Edlen still needs to receive final land use and building approval before construction on the development can begin. If all goes according to plan, construction could start in 2018 and wrap up in 2019 or 2020.

In addition to Gerding Edlen and Capitol Hill Housing, other key contributors to the project include Hewitt Architects, Schemata Workshop, and Berger Partnership.