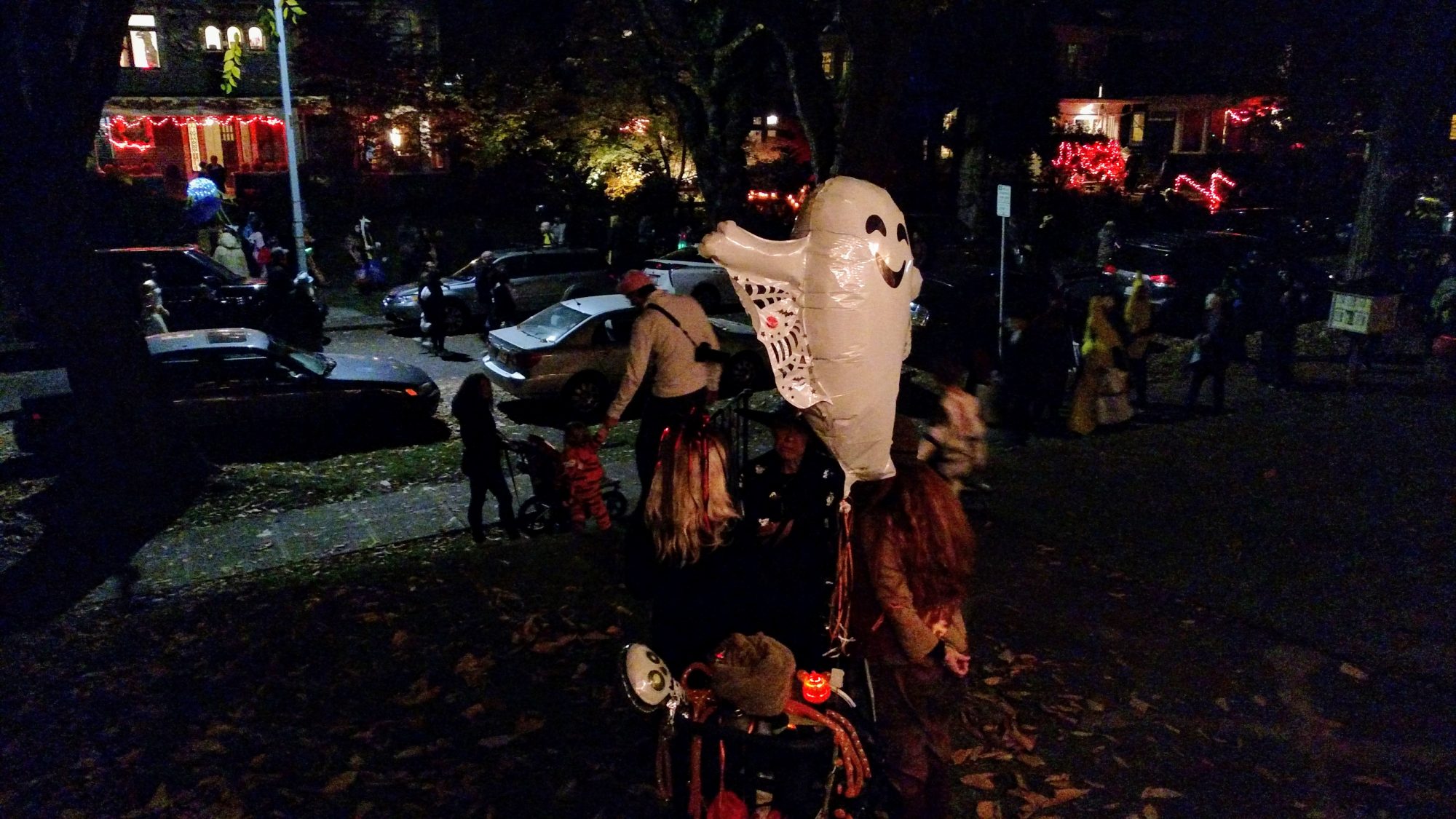 Every trick-or-treater is an urbanist on Halloween. Why leg it between spaced out suburban ramblers when you can find a street where the houses are built close together a hop, skip, and a jump from one another? Capitol Hill’s Halloween block parties demonstrates this idea. The 16th, 17th, 18th, and 19th Avenue blocks of North Capitol Hill shut down to cars as kids from miles around flocked in to fill the vacuum. Homes were transformed to haunted houses for the occasion. Some strung enough orange lights to look like jack-o-lanterns. Others sprung for fog machines.

Residents sat on their porches to doll out candy and appreciate creative costumes. I was sitting on such a porch on 16th Avenue this Halloween witnessing the stampede of kids. There were enough wizards and witches to fill Hogwarts. Along with wands, lightsabres lit up the night–enough Jedi to turn back a Sith army. Princesses, Batmen, Pokémon, and other unidentified superheroes roamed the streets with ever-expanding bags of candy.

A trick-or-treating kid can see the benefits of a dense neighborhood: more houses means more candy and close together means less wasted movement. The other lesson that Halloween teaches us about our cities is that we need to design safer streets. Nationally, the number of pedestrian deaths and injuries skyrockets on Halloween each year. “Children are more than twice as likely to be hit by a car and killed on Halloween than on any other day of the year,” the National Safety Council reports.

Capitol Hill helped address the pedestrian safety issue by closing down streets for these block parties so kids could trick-or-treat more carefree. The sheer volume of kids likely made it a necessity. We should be doing more all year long. Stronger traffic calming measures like diverters and speed tables could help slow traffic and make it safer to cross the street.

Another benefit of Halloween block parties is they encourage inter-generational socializing. I was at a gathering where there were mostly twenty- and thirty-somethings, but everyone congregated to the porch to greet the kids trick-or-treating and take turns handing out candy. In the process, people meet their neighbors and break out of their generational bubbles. For cash-strapped Seattle renters lacking the money to start a family, Halloween night is a nice reminder: oh right, kids exist. It’s a nice three hour dose for us, the childless thirtyish set–and the great part is we only see the sugar high rather than the sugar crash. It’s truly a magical night.

So check out a block party like the one Capitol Hill throws next year. It’s a great place to deposit a kid if you have one. And it’s pretty entertaining for adults, too.