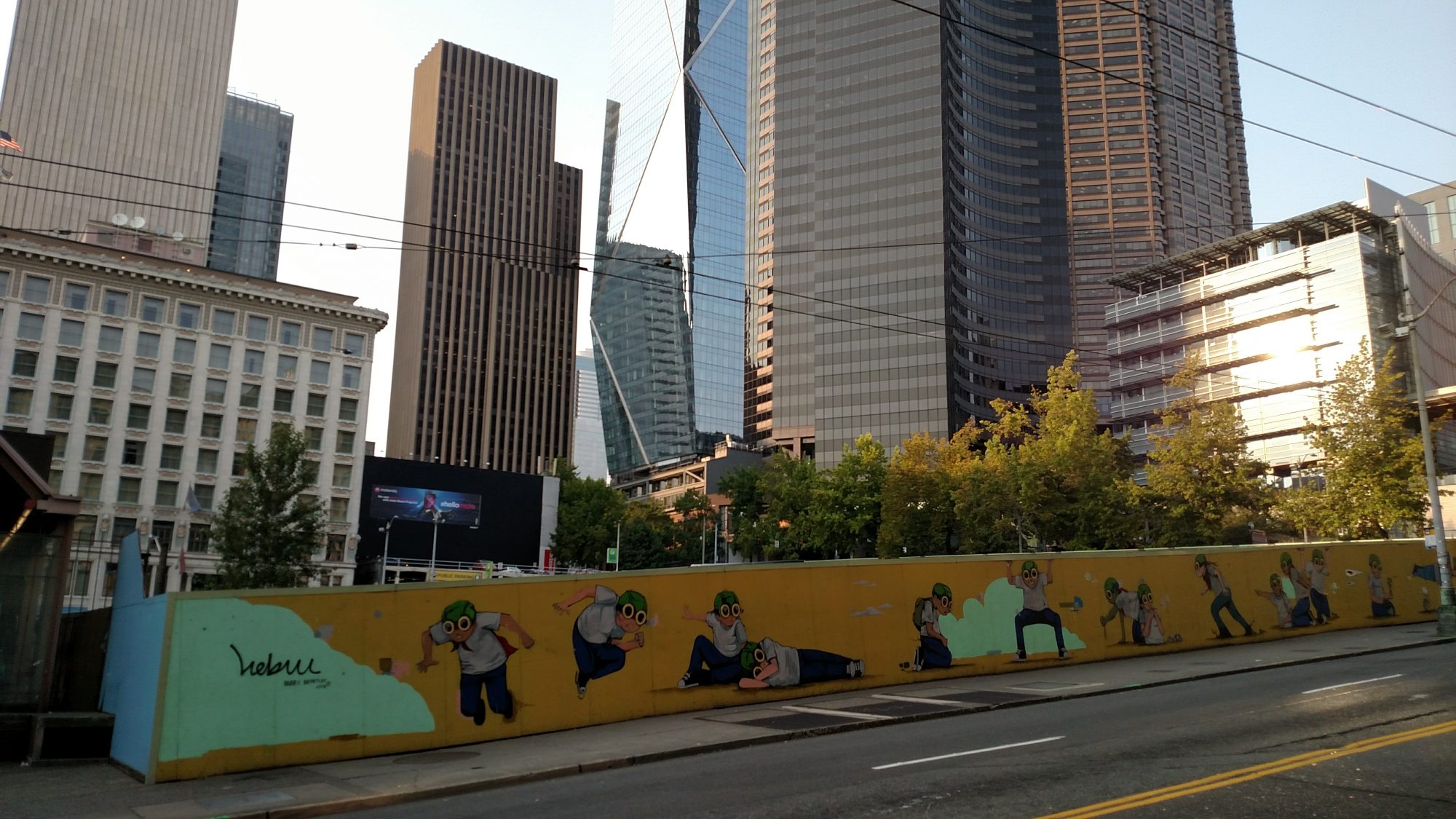 Drop boxes and post offices stopped taking ballots by 8pm last Tuesday but votes are still trickling in–even as outcomes are decided. Cary Moon’s share has been ticking up but she’s far from pulling off the upset, as she sits 43.57% of the vote. It looks like the race will shake out with Jenny Durkan at about 56% and Moon at 44%.

1. Durkan was able to peel some support off the urbanist coalition.

On the other hand, the splitting of the transit advocate vote isn’t all bad. Mayor-Elect Durkan announced this week that TCC’s Executive Director Shefali Ranganathan would be one of her two deputy mayors. It’s reassuring to have a transit advocate at a top Durkan administration position where she presumably can fight for transit priority and investments. Arguably investing in transit isn’t controversial. The Sound Transit 3 ballot measure passed in Seattle with more than 69% of the vote in 2016. So it’s safe to say Seattleites want to see big transit upgrades and are willing to pay for it.

After running on an anti-tenant, protectionist platform, Murakami got absolutely crushed by Councilmember Lorena González. While Murakami did a little bit better than Bill Bradburd (who managed only 21.4% against González in 2015) all indications are housing concern trolls (who oppose the city’s housing affordability agenda) have very little base of support in the electorate. Let’s start acting like it as we plan our land use policy. 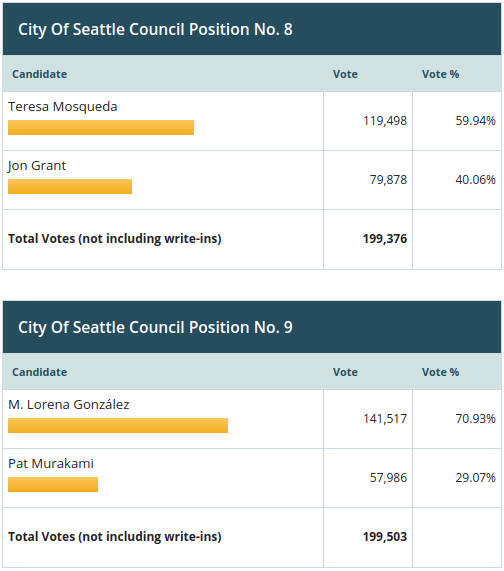 Grant sought to follow Kshama Sawant’s path to the council, but ultimately his opponent, Teresa Mosqueda, was a more captivating candidate. To me anyway, Grant’s signature campaign plank of 25% inclusionary zoning–likely counterproductive–ended up sounding hollow next to Mosqueda’s more nuanced housing policies. Where Grant shook his fists at developers, Mosqueda championed ways to constructively harness Seattle’s boom for good and expand housing options in every neighborhood.

How did Durkan jump out to a big lead? Precinct results map showing Durkan ahead in virtually every waterfront precinct on election night. These view homes tend towards some of Seattle’s spendiest, suggesting this election broke along class lines. See also Durkan’s 90% plus finish in Broadmoor.

Amazon invested in this election like never before, and their candidates did well. Amazon’s $325,000 money drop suggests progressive-wing candidates will need to contend with an even larger financial disadvantage in the future. Meanwhile, Seattle Times columnist Jon Talton said we should lick Amazon’s boots and thank our lucky stars for their corporate benevolence.

6. The Democrats took back the State Senate and now control Olympia.

Democrat Manka Dhingra handily defeated Republican Jinyoung Lee Englund in a special election in Legislative District 45. Olympia’s newest state senator will bring the Democrats from a one-seat deficit to a one-seat majority. That Democratic control should slow the tide of anti-urban bills coming from the state capital. It might also open the door for a McCleary education funding fix and a carbon tax (or cap and trade). However, don’t get your hopes too high since it’s still state Democrats we’re talking about. Things like a state income tax are probably too controversial for our current caucus.

7. Homelessness was a major wedge issue.

The majority of voters don’t seem to have come around to the Stop the Sweeps campaign, which opposes clearing homeless camps in favor of using the millions it takes to administer sweeps to administer outreach and services. Durkan exploited this wedge with campaign mailers and debate talking points. The catch is that now Durkan has to get results on homelessness or it will look like a broken campaign promise. If Durkan gets to roll out her plan, we may get a chance to see just how effective (small) vouchers can be in housing low-income folks in Seattle’s red-hot housing market.

8. Durkan convinced voters she was more pro-HALA than Moon without it being so.

One common election take is that Jenny Durkan embraced the Housing Affordability and Livability Agenda (HALA) more wholly than Moon, which contributed to her victory. That was the spin heading into the election, but is it really true? Moon’s call to improve neighborhood outreach in the next phase of HALA was read as capitulation to NIMBYs–a knee-jerk reaction Durkan campaign exploited in their messaging and mailers. But back in the primary the roles seemed to be reversed with Durkan more tepid on changes to single-family zones and praising neighborhood character. Meanwhile, Moon gave a clear yes to our question about allowing missing middle housing in single-family areas. Durkan’s answer was a non-answer.

The takeaway from the HALA wrangling is that Durkan will likely carry out the Mandatory Housing Affordability (MHA) program as laid out. However, she doesn’t appear likely to push the envelope by pressing for bigger upzones and MHA percentages, or by re-opening the single-family zoning conversation. But I’d love to be proved wrong and see Mayor Durkan broaden the boom.