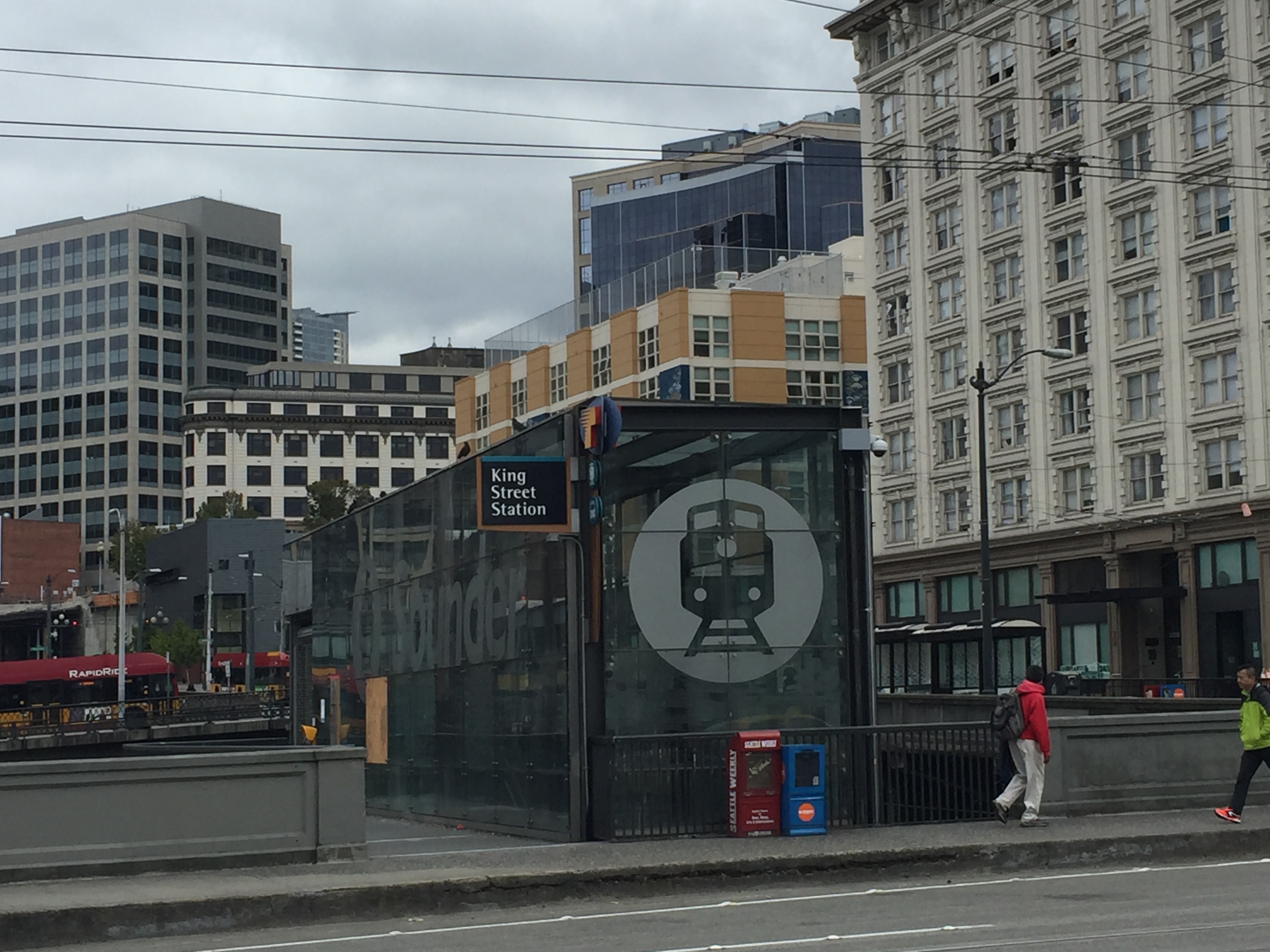 The North Sounder line has long been panned by technocratic transit advocates as a white elephant gift to Snohomish County communities. At a cost of more than $250 million for right-of-way slots, the line has four daily roundtrips on weekdays between Everett and Seattle. It suffers from a variety of challenges such as geography, shared track capacity, and occasional landslides. And while ridership on the corridor has been growing for many years, it’s not the kind of booming growth that the South Sounder line has experienced leading to more service demand. In fact, in the third quarter of 2017, ridership fell slightly from 1,754 to 1,750 daily riders year-over-year. This may be why Sound Transit put very little emphasis in its capital investment program under Sound Transit 3.

Over the next 20 years, minor improvements will be made to the line keeping it alive. Billed as station access, Sound Transit is poised to spend $40 million on additional parking facilities at stations in Edmonds and Mukilteo by 2024. However, Sound Transit could look at small capital investments to significantly increase ridership while making due with existing service levels. There are four infill station locations in Seattle (i.e., neighborhoods of Ballard, Interbay, and Belltown) that Sound Transit could look toward for only a few million dollars a piece.

New stations need not be extravagant. Sound Transit could limit costs by constructing modest station facilities. For instance, platforms could be limited to one per station on one side of the existing trackbed. They could also be restricted in length and contain nominal sheltering. Accessways could be direct and ideally at-grade to one or two locations. In no case would parking facilities be required, instead riders could take advantage of the local pedestrian, bicycle, and bus network. Of course, some costs may be harder to avoid, such as immediate track replacement, installation of crossover tracks, and stormwater facilities.

Sounder boosters have long sought a stop closer to the heart of Downtown Seattle. For many would-be riders, King Street Station is a bridge too far, requiring a significant amount of backtracking if they work Uptown. A station near Broad Street could help riders better connect with jobs in Belltown, South Lake Union, and the central core. Transit connections, however, are a bit light at present near this portion of the waterfront.

Currently, Route 99 operates within a short walking distance from the possible station location. But the terminal loop could be altered to more directly serve a Broad Street station. Further up the hill, a variety of bus lines operate on Third Avenue, but the steepness of the hillclimb clearly poses a challenge to many would-be riders. Perhaps routes terminating near the north end of Third Avenue could also serve a Broad Street station and a version of Route 8 could be threaded to this precinct.

A station may be best suited the area between Clay Street and Vine street just west of the mainline railway. This would allow for two full blocks of tracks to be unimpeded by at-grade crossings common along this stretch of Alaskan Way. The platform itself could be located immediately west of the former George Benson Waterfront Streetcar tracks and connect with the Alaskan Way sidewalk. New crossover tracks would be necessary north and south of the station to avoid conflicts with freight and other passenger rail traffic.

Expedia will soon call Smith Cove home adding thousands of new jobs at its waterfront campus, which was previously owned by Amgen. Many employees are already Seattle and Eastside residents, but some undoubtedly live in areas further north. Expedia’s sprawling campus is situated just west of the Helix Pedestrian Bridge, which crosses over mainline BNSF tracks and siding. This pedestrian bridge is important because offers one of the few crossings over the railway corridor north of Downtown Seattle and helps create a strategic opportunity for a station at this location.

Aside from Expedia’s campus, vacant properties ripe for redevelopment north and west of the campus remain and a wide mix of industrial and commercial properties line Elliot Ave W. Some properties along the street may also offer redevelopment opportunities for more intensive uses. In terms of transit connections, a station next to the Helix Pedestrian Bridge would be well served. Five separate bus routes operate within one block of the station location:

A station would be best suited to the east side of the mainline tracks immediately below the Helix Pedestrian Bridge. Priority would need to be given to Sounder trains to use a siding next to the station platform. This would invariably require negotiations with BNSF to alter use of the tracks. Property acquisitions from adjoining property owners may also be necessary for passenger facilities. However, with the pedestrian bridge already in place, Sound Transit would not need to install a new crossing.

Further north at the dividing line between Magnolia and Interbay, Sound Transit could add a station at Fishermen’s Terminal along the existing BNSF mainline. The station could be located just north of the W Emerson Pl overpass in the railway trench avoiding conflicts south of the junction and benefiting from nearby crossover and siding tracks.

The area east and north of the railway trench is consists primarily of industrial and maritime uses with some restaurants. East of the railway trench is largely residential in character with a mix of multifamily and single-family housing. Overall, the area is fairly walkable and bikeable despite the railway trench splitting Magnolia from Fishermen’s Terminal. In fact, recently the Seattle Department of Transportation installed protected bikes lanes on Gilman Ave W and W Emerson Pl connecting three different trails. Two bus routes also operate within two blocks of the possible station location providing transit acess:

To support a station at this location, Sound Transit would ideally locate a platform on the east side of the trench just north of the W Emerson Pl overpass. Access to street level would require construction of ramps and stairs up and along the embankment.

The best case for a Ballard station could be just north of the Salmon Bay Bridge and south of NW 57th St. The railway approaches the bridge in a trenched embankment before crossing over NW 54th St and Salmon Bay. The railway trench is largely flanked by single-family residential uses, which predominate the surrounding area. A few blocks east retail, industrial, and multi-family residential uses begin to emerge as one inches closer to the heart of Old Ballard. Meanwhile, the area north and west of the railway is a mix of maritime and restaurant uses along Shilshole Bay.

A station serving Ballard could be successful in generating favorable ridership for several reasons. Firstly, riders north of Seattle may find the station useful to access jobs in central Ballard and the industrial area centered on Salmon Bay. A variety of all-day and peak-hour buses make connections to those areas easy. Secondly, local residents might find the service desirable to get quick service to Downtown Seattle, Pioneer Square, and SoDo. Other proposed stations could make intermediary destinations viable, too.

In terms of improvements, a station would be best located on the east side of the railway with a platform. Several other improvements would also be necessary or desirable, such as stairs and ramp leading to a sole accessway to the NW Market St cul-de-sac and two crossover tracks would likely be necessary to switch between tracks north and south of the station. Longer-term improvements could include wider station access facilities to NW 56th St or NW 57th St.

Implications of Light Rail to Ballard 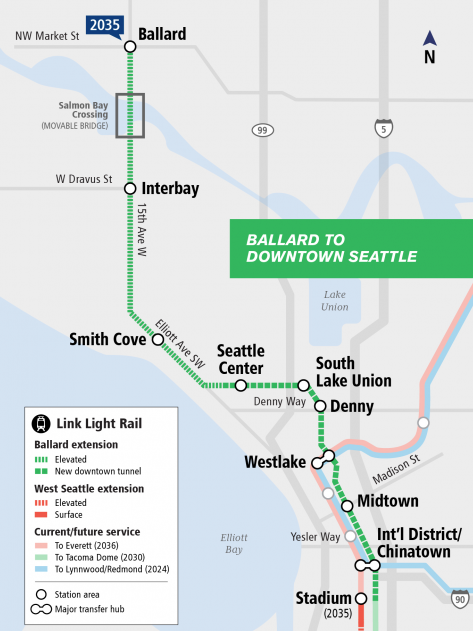 By 2035, light rail will be extended to Ballard providing north-south service to Downtown Seattle via Interbay, Uptown, and South Lake Union. Several stations anticipated on the line could influence the proposed North Sounder stations. These include stations in Ballard, Interbay, and Smith Cove. Sound Transit conceptually envisions the light rail stations to be located at:

The Ballard light rail stop could end up peeling off some local riders in the area from using the Ballard commuter rail stop, at least until light rail is extended further north. But it certainly wouldn’t fully compete with North Sounder since the commuter line would still serve unique destinations to the south.

Similarly, a light rail stop at SW Dravus St in Interbay could influence local rider demand for commuter rail at Fishermen’s Terminal. The impact, however, might be less significant given that the commuter rail station would have a wider catchment area than Ballard and distance between the commuter rail and light rails stations (likely about a mile apart).

Finally, the Smith Cove commuter rail stop could actually benefit from a direct light rail connection. It would allow riders the option of taking a quick light rail trip to Uptown, South Lake Union, or Westlake. Less obvious locations like Capitol Hill or University of Washington could actually be time competitive with an additional transfer.

These proposed stations each come with their pros and cons and it’s hard to fully know how ridership would respond. One of the most obvious drawbacks is the time it would take for existing riders to reach King Street Station. Each stop would add a minute or more to the commute time for these riders if they don’t commute to locations north of Pioneer Square. Another set of clear challenges is that most of these stations would be located at edge areas with somewhat poor catchment pools–a problem North Sounder suffers from today–and operate at peak hours only. It could be argued that this would pit North Sounder against local express routes, possibly poaching riders. Conversely, it could lead to an increase in overall transit ridership.

Importantly though, these stations could change some of the paradigms of regional and in-city commuting, which is traditionally built strictly on north-south spines to Downtown Seattle. New infill stations could further encourage connections that are east-west oriented to emerging growth centers (e.g., Ballard, Fremont, Interbay, and Uptown). They could also offer faster in-city rides to many districts, making the added stations valuable assets to the overall transit network and North Sounder line. The first step to realizing this, however, requires a genuine evaluation by Sound Transit.