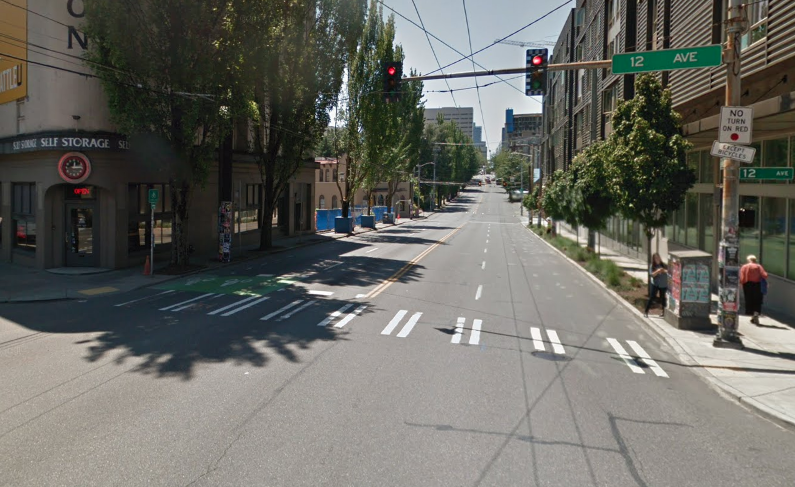 Seattle’s annual traffic report includes a map of the locations where pedestrian collisions occurred, with the number increasing with the size of the blue dot.

Looking at 2016’s map, the data is much like previous years: it shows that pedestrians are most frequently involved in collisions in the downtown area, where numbers of people on foot are highest. The frequency of dots and their sizes dissipates the further away from downtown you get, with hotspots seen at the intersections of major arterials in the urban centers and villages around the city.

But there’s only one intersection where the largest dot in the map’s key is used, which indicates six pedestrian collisions within a single year, and it’s not downtown. That point on the heat map is centered on E Madison Street and 12th Avenue in Capitol HIll. It sticks out like a sore thumb and dwarfs most of the other data points.

Last year was not an anomaly: David Gutman at the Seattle Times identified 12th and Madison as the 5th most dangerous intersection in the city between 2008 and 2017, with 14 injuries to pedestrians recorded by the Seattle Police Department during that period.

12th Avenue intersects with both E Madison Street and E Union Street at that intersection, creating a huge swath of asphalt that pedestrians navigate along the perimeter; drivers are free to make left turns from both 12th Avenue and E Madison Street whenever they feel it’s safe to do so. Long signal times across short crossing distances, like the western leg of Union Street, encourage pedestrians to cross against the light. In short, this intersection is a recipe for collisions. 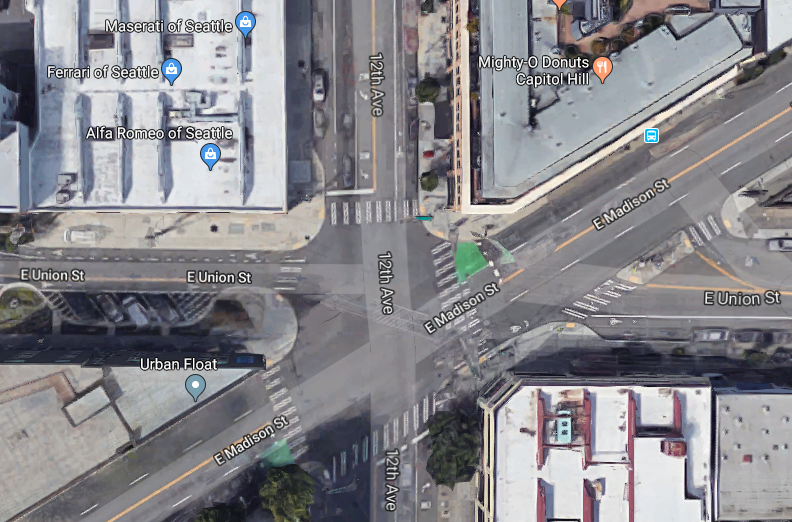 Seattle has a lot of intersections that combine these factors together, but this one, situated in the middle of Capitol Hill, is one of the most notorious. But it also happens to be right at the middle of the Madison Bus Rapid Transit project or RapidRide G, one of the centerpiece transit projects of the Move Seattle levy era. The $120 million project had been zooming toward construction, with planners saying as recently as last year that start-of-service was planned for the end of 2019.

Now it appears that the federal grant process–key to closing the budget gap on the project–is taking longer than expected, with no support for Federal Transit Administration grants from the executive branch. Service is now not planned to begin on the corridor until 2021, Capitol Hill Seattle reports.

With a full funding path not certain in the current political climate, and the start of service already pushed back almost two years, this begs the question of what we can do to improve safety at such a pivotal intersection in the interim. We know that the intersection is unsafe because of the unprotected left turns across massive crosswalks. After the intersection is rebuilt, drivers will not be able to turn left in most instances, and right-on-red will be restricted across the bike lanes. These are changes we can make now.

Tethering high priority intersections to big ticket improvements risks endless delay: the Broadway streetcar extension, for example, was for many years the main vehicle for making improvements to Broadway and John Street. After business owners and the Capitol Hill Chamber of Commerce ultimately pulled their support for the project, we were left with the main intersection outside Capitol Hill Station without any safety improvements. Seattle Department of Transportation is finally planning to install a left turn signal among other improvements, but there are injuries that have occurred at the intersection that might have been prevented if we had acted sooner.

12th and Madison is an example of where cheap interim solutions can solve a serious crisis, as the pedestrian collision numbers indicate, before the major capital improvements come in at a later time. The two are not mutually exclusive, at least not in a Vision Zero city.