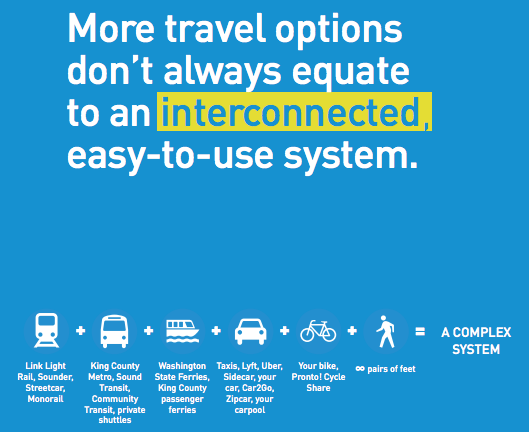 Seattle Mayor Ed Murray stood before community members and city staff in Ballard yesterday to launch his 10-year, citywide transportation investment plan. Move Seattle, as it is known, will be Seattle’s roadmap for near-term investments and tying together all of the big transportation plans that Seattle has. The plan is focused around five central pillars: safety, interconnectedness, vibrancy, affordability, and innovation.

Seattle already has an amazing set of transportation and street use assets, but the Mayor wants to build upon this to meet not only today’s needs, but grow for the future in an innovative way. The Mayor recognized that Seattle’s transportation foundations are built upon investments made over 60 years. And while this is a good basis from which to grow, the demands of the modern city have radically changed since the days of collector-arterials and cascading greens for cars. Move Seattle will take a big leap forward by integrating key transportation policies like Complete Streets, Vision Zero, and each of the major 20-year modal transportation plans on the book (which include the Pedestrian, Bicycle, Transit, and Freight Master Plans) into one overarching plan.

The Mayor wants the transportation department (SDOT) to use every tool in their arsenal to deliver comprehensive projects that put the City’s public right-of-ways to their best use. That doesn’t mean that every street will meet every modal need. Instead, in the spirit of Complete Streets, SDOT will look at corridors as whole systems–something the agency has been doing for a long time–to provide for all modes in city projects. Ultimately, the city will rapidly see a change from one primary mode to a wide variety of modes to drive equity and balance needs.

As the Mayor noted, “More choices means fewer cars on our streets. That means, when you do need to drive, you’ll be up against less traffic. And with roads less clogged, freight deliveries can make it to their destination on-time, supporting jobs and growing our economy. Move Seattle prioritizes the maintenance of our existing system so that system remains functional and safe. Retrofitting our bridges for seismic issues, repaving our streets, investing in new traffic light technology to ease congestion, improving safety in our school zones, improving pavement markings, replacing aging signs, and adding lighting to enhance visibility.”

Of course, the Mayor’s plan requires serious capital investments to bring it to fruition. The city already has a massive backlog of needed maintenance and repair let alone expansion and reallocation. The Mayor recognizes this and plans to propose a series of funding sources to ensure the success of the overall program goals for Move Seattle. This year, the Bridging the Gap levy will expire without reauthorization from Seattle residents. While the levy was never intended to fill all of the funding needs, it was meant to get Seattle on the right path, and it’s certainly achieved that. The Mayor has been exploring a bigger version, and that’s something we anticipating hearing about in the coming the coming weeks.

The Move Seattle plan itself is fairly accessible, despite its 76-page length, with handy diagrams and lots of interesting statistics, infographics, and other tidbits. For instance, SDOT talks about using innovative approaches to putting right-of-ways and public spaces to better use. As parklets, food carts, and sidewalk cafes increasingly become popular across the city, SDOT wants to expand those programs where they make sense. The way the agency sees it, the right-of-way is meant for all and should be more than just a way to move people and goods, it also is a place for interaction, creativity, spectacle, and freedom.

The latter portion of the plan talks about some high-profile projects that the Mayor and SDOT hope to prioritize over the next decade. To many, the project list won’t be too surprising with many of them focused on moving people around the core of the city and its various urban centers.

Long-time poster children for completion like the Burke-Gilman Trail’s Missing Link (noted as E on the project list) will finally see an end under the plan. For this project specifically, SDOT thinks it will take $15.9 million to finish, but they also highlight why the project really does deserve priority attention. Each project gets a project score in four areas, six qualitative measures, and a total project cost. From a safety standpoint, the Burke Gilman Trail Extension is off the charts scoring 20 out of 20 under the measure. It also ranks highly in interconnectedness by extending the trail that much further into the urban core of Ballard.

We’ll follow up to dissect elements of the Move Seattle plan in future articles.