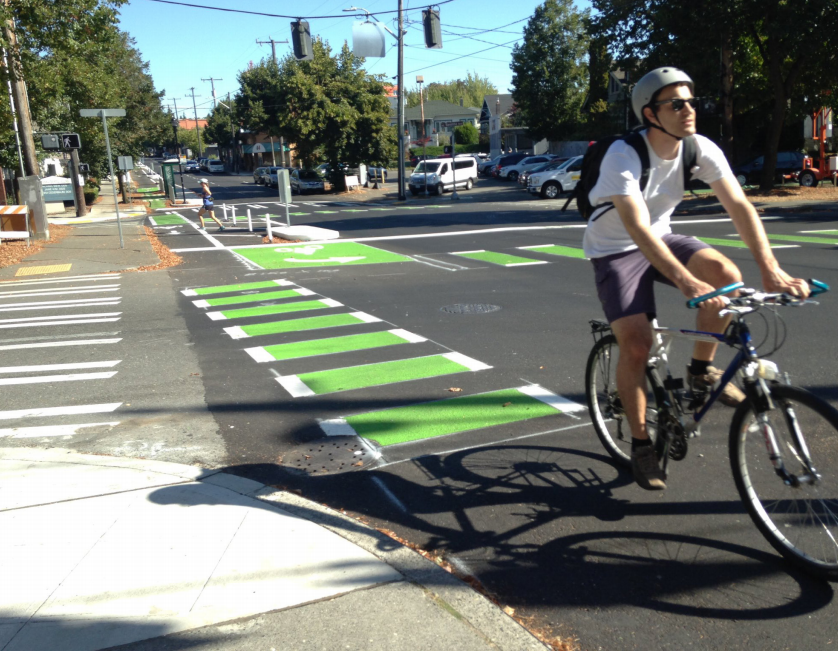 When the latest designs for Madison Street’s BRT line were released in March, street safety advocates were dismayed at how the bike and pedestrian safety components of the project seem to be diminishing after every step of design work. In particular, the central bike component for the project, protected lanes on most of E Union Street, appeared to have essentially fallen off the radar. Because Madison Street doesn’t have any room for bike facilities, if the route is going to get bike upgrades, they are going to come on nearby streets. But it’s easy for those routes to get passed over or even cut when they aren’t directly involved in the project path.

We wrote about a lot of potential issues around the bus rapid transit line now slated to open in 2019. Apart from clear problems bicyclists and pedestrians will have crossing the important 12th and Union intersection, the fact Seattle Department of Transportation (SDOT) only planned protected bike lanes for one block in each direction was also pretty disappointing. That design would have made it harder for bicyclists to connect with the transit line at that point. It turns out this was due to a mistake in coordination between the Madison BRT project team and the bike master plan project team.

“We figured out quite recently that a protected bicycle lane on Union was neither included in the BMP Implementation Plan nor the Madison BRT project,” said Genesee Adkins, SDOT Chief of Staff, during her update to the transportation board on April 4th.

The latest draft of the bike master plan’s five-year implementation plan does not show those E Union Street bike lanes, but the transportation committee was assured that they would be getting added back on. That said, it’s not set in stone how far up E Union Street they will go. Providing a connection from Broadway up to the neighborhood greenway at 22nd Avenue E would likely provide the best connectivity for people in the Central District.

Because SDOT is focused on optimizing resources to move complete streets projects forward, coordination between different projects has been ramped up. Projects like the SR-520 bridge replacement, Accessible Mount Baker, Waterfront Seattle, and One Center City all leverage funding to improve multimodal infrastructure, but these projects must be at the benefit of our modal master plans. In addition, bike components are being added to a host of repaving projects, sometimes to streets that are not targets for bike facilities on the bike master plan. In other words, our plan for a rapidly expanding bike network is being coordinated through essentially every project list at SDOT–to the credit of the department.

While the E Union lanes are getting added back to the project, a greenway on 24th Ave E was another casualty of coordination issues at SDOT. The Seattle Bike Advisory board had previously been interested in a greenway on 24th as a connection for residents in Madison Valley across Madison Street. However, because this project was listed as one that was being developed in conjunction with Madison BRT, they de-prioritized it on their list of projects for the bike master plan. The Madison BRT team then interpreted this as an indication that the bike board was prioritizing other projects ahead of 24th when in fact it was the opposite.

In March, the Bicycle Master Plan was awarded a design excellence award by the Seattle Design Commission. While the master plan is a great blueprint, and the hard work that went into its creation is evident, it’s hard not to wonder if one of the key criteria for the award–“impeccable execution”–has been met yet.

The rest of the bike master plan’s implementation schedule for the next five years is mostly unchanged from the update we published in February. You can browse the full draft plan below which should get approved by the council within the next month after a final buyoff from the bike advisory board. The implementation plan should be receiving an update yearly by March 31, with this one a few weeks late due to the high number of projects and coordination required. Here’s hoping that we don’t need to “reboot” these plans any more for the foreseeable future.

Check out the entire draft Implementation Plan below.

SDOT – BMP Implementation Plan 2017 by The Urbanist on Scribd