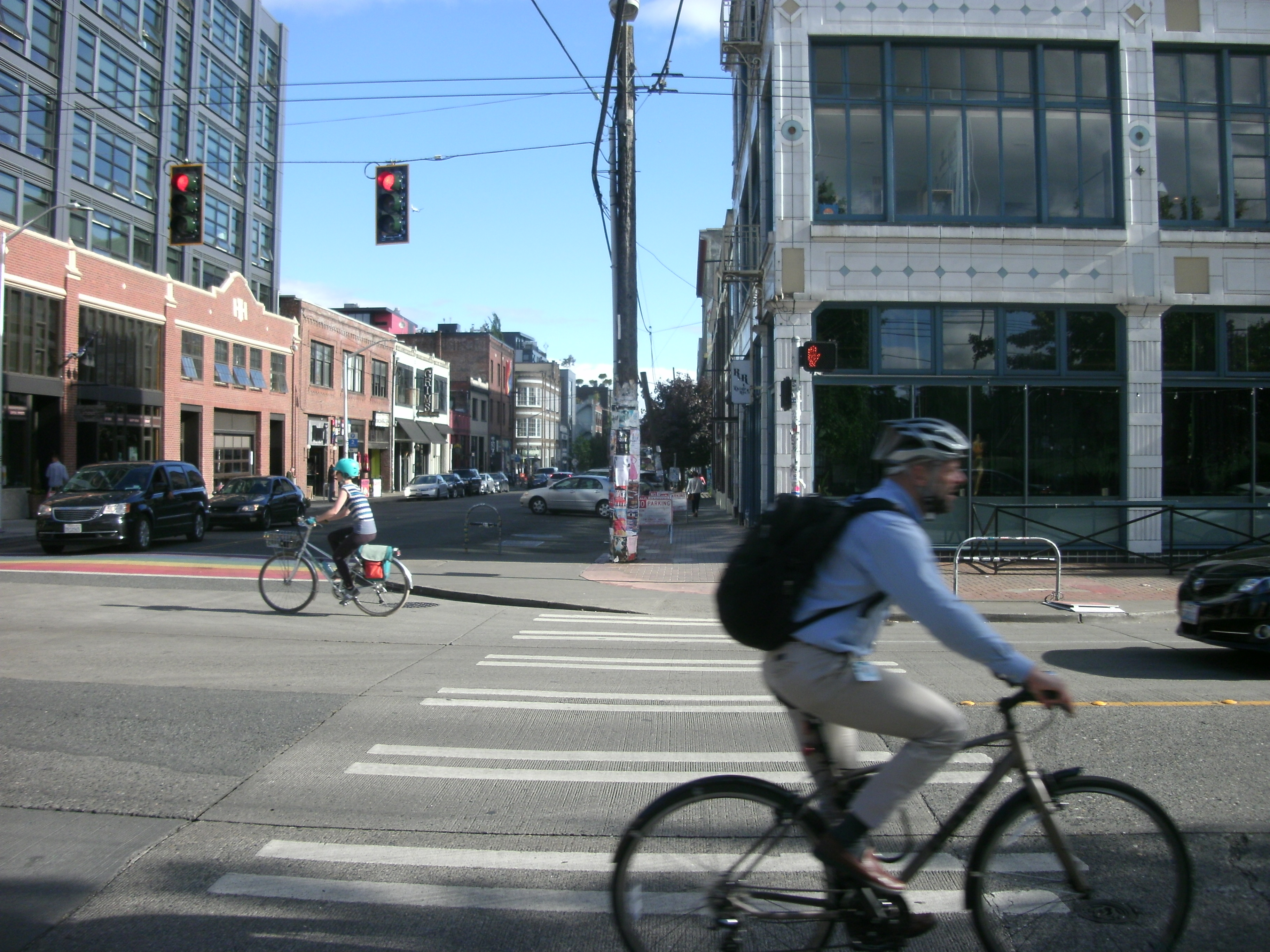 Last week, we reported on Commute Seattle’s survey of downtown commute modes, which is getting widely shared because it reports single occupant vehicle (SOV) mode share dipped to 30%. Decreasing SOV mode share is a huge victory for our city and reflects the fact that new commuters recognize that downtown cannot handle any more cars.

Also getting some attention: bike commuting is essentially flat from two years prior. This is not surprising, considering the fact that downtown bike lane expansion was put into a deep freeze ever since the 2nd Avenue bike lane proved itself to be safe, invaluable, and mildly confusing to motorists downtown. Meanwhile, Seattle has invested more and more in transit, with the 2014 bus levy probably causing the biggest impact on downtown commuters as much-needed relief was brought to riders on overcrowded routes.

If you are wondering what the roadmap to increasing mode share for bike commuters is, we have an idea of what the plan for implementing the bike master plan will look like for the next 5 years. Every year, the Seattle Department of Transportation (SDOT) reprioritizes projects based on feedback, particularly from the Seattle Bicycle Advisory Board. This plan gets approved by the City Council around March. At this time the plan is still in draft form, but taking a look at the document does allow insight into the department’s plan to get back on track after the disappointing scaling-back of prior years. And the draft plan is actually fairly downtown-heavy.

At the City Council’s Transportation Committee meeting last week, chair Mike O’Brien directed leaders at SDOT to come back to the table in March with a plan that fully connects downtown–running with the Basic Bike Network idea that our board wholeheartedly has endorsed. But I want to give an overview of what’s planned so we know what we’ll be gaining when that plan becomes more clear.

In this article I am only going to outline the projects slotted for completion within the next three years. Most of the projects within that timeline have begun planning stages, and so they are less likely to fall of the implementation plan next year. Beyond that timeline it’s easier to see projects getting swapped out as more pressing needs come up.

In the five-year implementation plan, North Seattle is currently slated to receive 28.6 miles of bike facilities to South Seattle’s 23.2 and Central Seattle’s 17.4. While counting miles can be slightly misleading, for example when the projects downtown might be very short, high-use segments, it is important to take a step back and look where we are investing. On the South End, 50% of those miles are coming in the form of greenways, with half of the greenways coming this year with the Rainier Valley greenway. It will be very important that the entire city ensures that the greenways constructed there are high-quality. City Council district two faces an outsized portion of deaths and injuries due to traffic violence. It is the duty of all Seattleites to reduce that however we can.

It’s also worth looking at where we are not building bike facilities. Georgetown and South Park do not have any projects in the five-year implementation plan at this point in time. South Park is an urban village and it’s time that we started treating it like one. It is my hope that we can correct this oversight in the implementation plan in the next few years. Vision Zero demands that we do so.