On Wednesday, King County Metro Transit announced fare enforcement changes to promote more equitable outcomes for riders. The changes come on the heels of recommendations by the King County Auditor’s Office that laid out very concerning data suggesting people experiencing homelessness bear the brunt of citations and misdemeanor referrals. These people have the least ability to pay, highest need for mobility assistance, and most to lose by having charges on their record.

In January, I penned a piece “Are Transit Fare Violation Policies Fair?” that looked in to how Metro and Sound Transit are managing fare enforcement across their networks. At the time, Metro spokesperson Scott Gutierrez said that the agency wasn’t actively pursuing any changes, but does continually evaluate its policies.

In addition, the audit poured some very cold water on how Metro is carrying out its fare enforcement program and the efficacy of it: 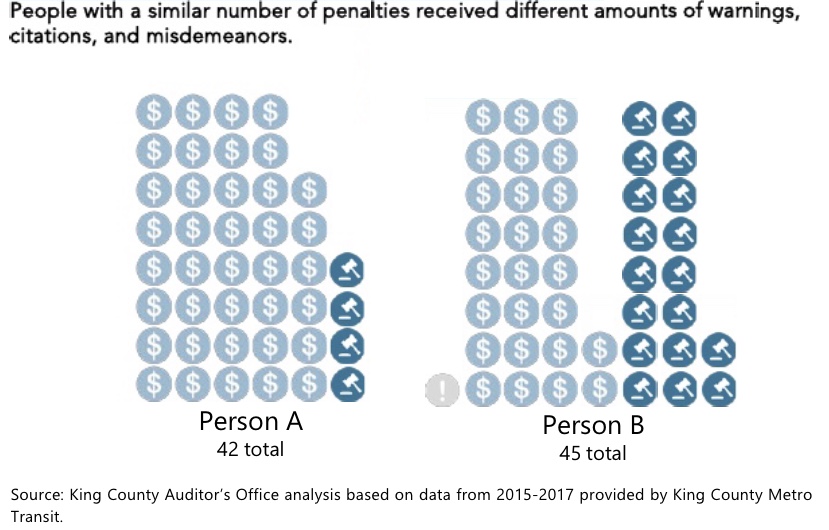 Five recommendations were issued by the King County Auditor’s Office:

Metro generally concurs with the five recommendations and plans to address each of them over the next two years. The transit agency has already instituted some reforms. These include suspending the practice of sending misdemeanor cases to the sheriff’s office, giving youth an extra verbal warning before doling out a citation, and providing more training and management of fare enforcement officers.

Over the summer, Metro will commission a stakeholder group to look into several topics and provide recommendations in the fall. The topics include developing options to encourage compliance with fare payment laws while not unduly penalizing low- and no-income individuals, collecting better data to evaluate the agency’s performance, identifying how procedures may create unintended consequences, and reviewing technology options that may provide alternative means for people to meet their fare payment obligations.

It’s not clear what all of this will ultimately look like, but Portland’s Trimet serves as a recent example of how a robust discussion on fare enforcement fairness resulted in more equitable protocols. In the fall, we’ll likely get a better sense of where Metro is headed. Will other local transit operators follow suit?