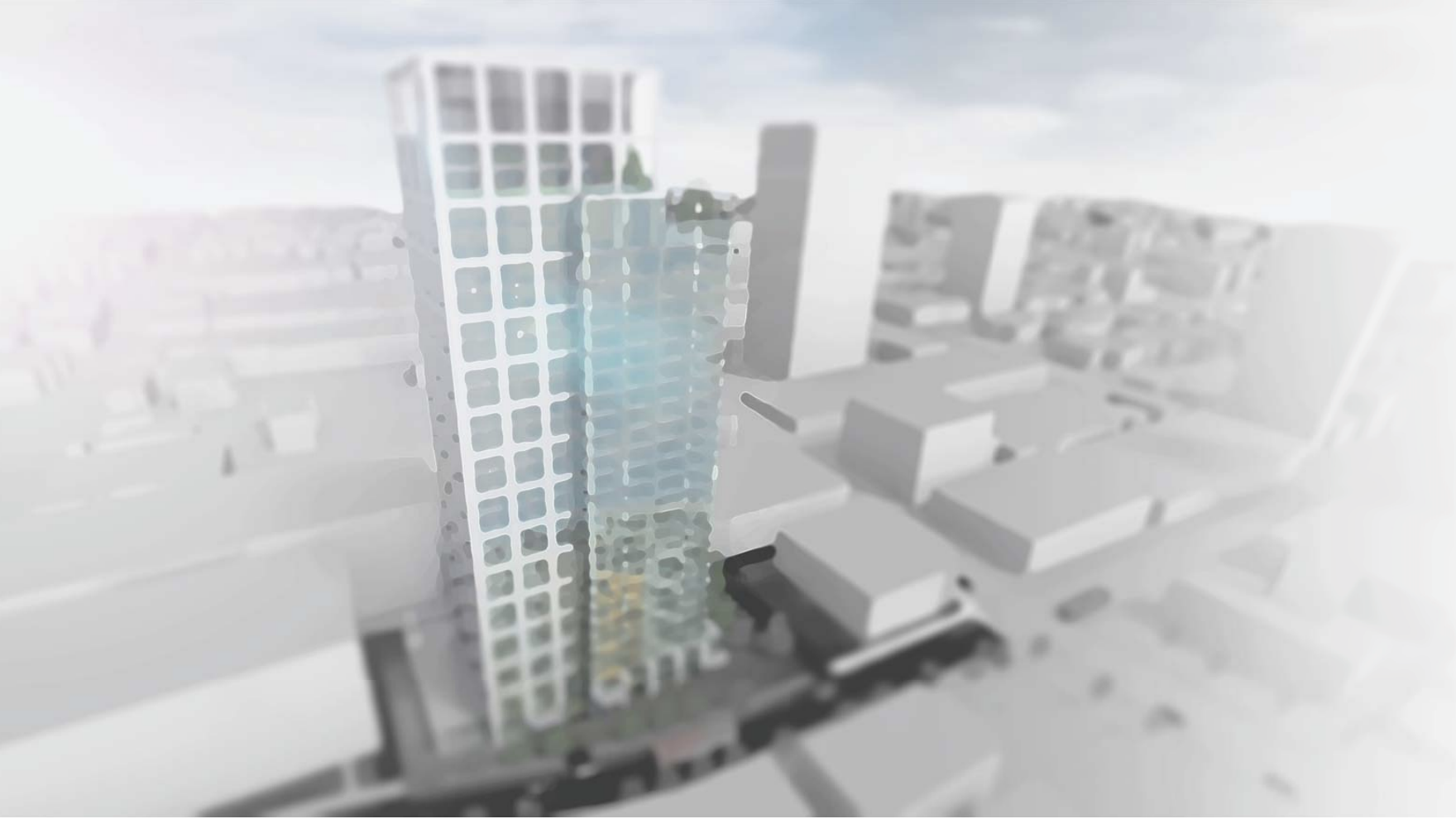 A few months back The Urbanist wrote about The M, the first new highrise proposed for the U District since the upzone was approved. In the next few month at least three more proposed highrises will come before the city’s Design Review Board, proving the upzone is working and that The M was not a one off, but the start of a trend. The combined projects will add over 500 units of housing, over 100 hotel rooms, and retail spaces a short walk of both the UW and the future U District Link station. They’ll also either pay or provide for many units of affordable housing; add green space to the neighborhood; and displace nothing more than surface parking and some old lowrise commercial buildings. Both are testaments to the success of the Mandatory Housing Affordability (MHA) upzone that tied greater height allowances to affordable housing requirements and signs of what is to come.

Located in the parking lot to the north of Hotel Deca the project’s preferred alternative is  a 24 story tall building with 211 residential units, 2,400 SF of retail space and 76 parking stalls located in two levels of below grade parking. The project, called HUB U-District | Brooklyn, is being developed as luxury student housing by Core Spaces and designed by Hartshorne Plunkard Architecture (HPA). The Core and HPA have worked together on student housing projects throughout the county including a previous project in the U District and in Portland and Eugene, OR. Their projects typically are urban, amenity rich, and oriented towards an affluent class of student. Thanks to MHA, the tower would also contribute about $5 million dollars to the affordable housing trust fund if the developer chooses the in-lieu payment option.

The design team presented three alternatives, each variations on shifted boxes. The project’s preferred alternative is called The Shift and the bulk of the building is broken down by pushing and pulling the building both vertically and horizontally and then further subdividing it through a series insets. The resulting form has multiple roof terraces. While I don’t love the overall mass, and may have chosen option A myself, the architecture firm seems competent–particularly on their larger, higher budget projects. Based on their portfolio and the precedent projects presented in their design review packet they appear as though they have the ability to make it into something nice.

The project responds to several of the new U District guidelines. Brooklyn Ave is a Green Street and so is singled out for special treatment such as a greater set back and more greenery. This gives some early hints about what is in store for the U District and hopefully some of the public benefits to come with the new development. Additionally, as part of the U District upzone the site was granted a base buildable area (based on a ration of the lot area) and then further commitments to provide public goods are needed to reach the maximum buildable area. Sixty-five percent of the additional building potential is obtained through providing the required Mandatory Housing Affordability–the project will either pay $20 per square foot into the housing fund or make 9% of their units rent restricted. The remaining 35% is provided as a bonus for providing additional street setback, Green Street Improvements and providing the public open space on the north end of the site.

As an alternate, the developers could have bough the unused development potential from landmark and vulnerable unreinforced masonry buildings in the neighborhood. For the public open space the developer is opting to provide a pocket park. The parks though is unfortunately cut off from the main project site by an empty lot that is being reserved as an access point for the lot to the west. This makes for a strange relationship between the building and its retail and the small park marooned to the north. If thoughtfully executed, the pocket park could prove to be great amenity to a rapidly densifying neighborhood, if not it could just be a vacant an unwelcoming void in the fabric of the city.

The project had its Early Design Guidance Meeting before the Northeast Design Review Board at on July 23rd where as reported by The Registry it was denied approval to move forward and will require another EDG meeting. According to the Registry, the board thought the building did not respond adequately to its context , that the project team should work more with the community to insure the success of the pocket park, and that they needed to refine their architectural concept. Hopefully it they will respond quickly and thoughtfully and the building will be able to move on in the near future.

This second project is truly mixed use: it will have 123 units of housing, 168 hotel rooms, 4,700 SF or retail and 183 parking stalls in 4 levels of underground parking. Designed by Caron Architects, the project proposes a very tall (for the U District) building with a very subdued form. Caron has not been know in the past as a highrise firm, usually doing low and mid-rise residential, but seems to be making a jump in scale with this and several other building. The projects also proposes to add a pocket park and streetscape improvements in this case the pocket park is more closely integrated with the building base.

The preferred alternative starts with a basic zoning envelope and then manipulates it into what appears as two interlocking boxes. The form is more subdued or more elegant than the first proposal depending on your perspective.  I think it is a nice simple place to begin and allows for a clear path to a clean, elegant building. Of course we will have to wait until the recommendation level to really see what the building will look like.

As the section above shows, they propose putting the hotel on the lower levels and saving the upper levels and the views that go with them for the apartments. Residential amenity areas are located on the ground floor and on terraces above the retail and at the upper level setback.

Like the first project, this building is relying on open space and streetscape dedications in addition to required MHA participation–likely upwards of $7 million based on preliminary gross square footage of 348,944–to reach it’s full building potential. In this case, though, the green space appears to be more closely tied to the base of the building. The pocket park will benefit from the additional activity provided by the resident and hotel guests as well and the retail.

The project will go before the NE Design Review Board on September 17th at 6:30 PM at Good Shepard Center. Public comment can be submitted in writing or in person at the hearing.

But Wait, There’s More (and could be even more)

On August 6th the NE Design Review Board will hear the EDG presentation for a fourth U District highrise proposed at 1200 NE 45th ST. This project will be 21 stories with 230 apartments, retail and parking for 103 cars. They have not released their design review packet yet so there are few details to share. In additions there are rumors swirling about even more proposed highrises to come.

All this new tall development speaks to the demand that exists for homes and workplaces in our center city close to where people want to be and fast transit that will take them to other places they want to be. Highrise construction is not cheap, but neither is land so builders are trying to get more out of their choice parcels and expect rents to be high enough to recuperate costs. This shows that there is demand in the U District and that the city got their numbers right in the upzone. Developers are still building homes, and they can do so while providing affordable housing and neighborhood amenities. These new project are subject to Mandatory Housing Affordability at the M1 level and so will either pay $20 per square foot into the housing fund or make 9% of their units rent restricted. With projects this large, the expected contributions really add up. Between The M’s $3.5 million, HUB’s $5 million, the Caron hotel tower’s $7 million, and another five million or so for the fourth tower; the first four highrises out of the gates likely represent $20 million in affordable housing dollars.

What do you think? Are you excited by the U District’s vertical future? Should we be building highrises in more places or should they be limited to downtown? Let us and you fellow readers know in the comments.