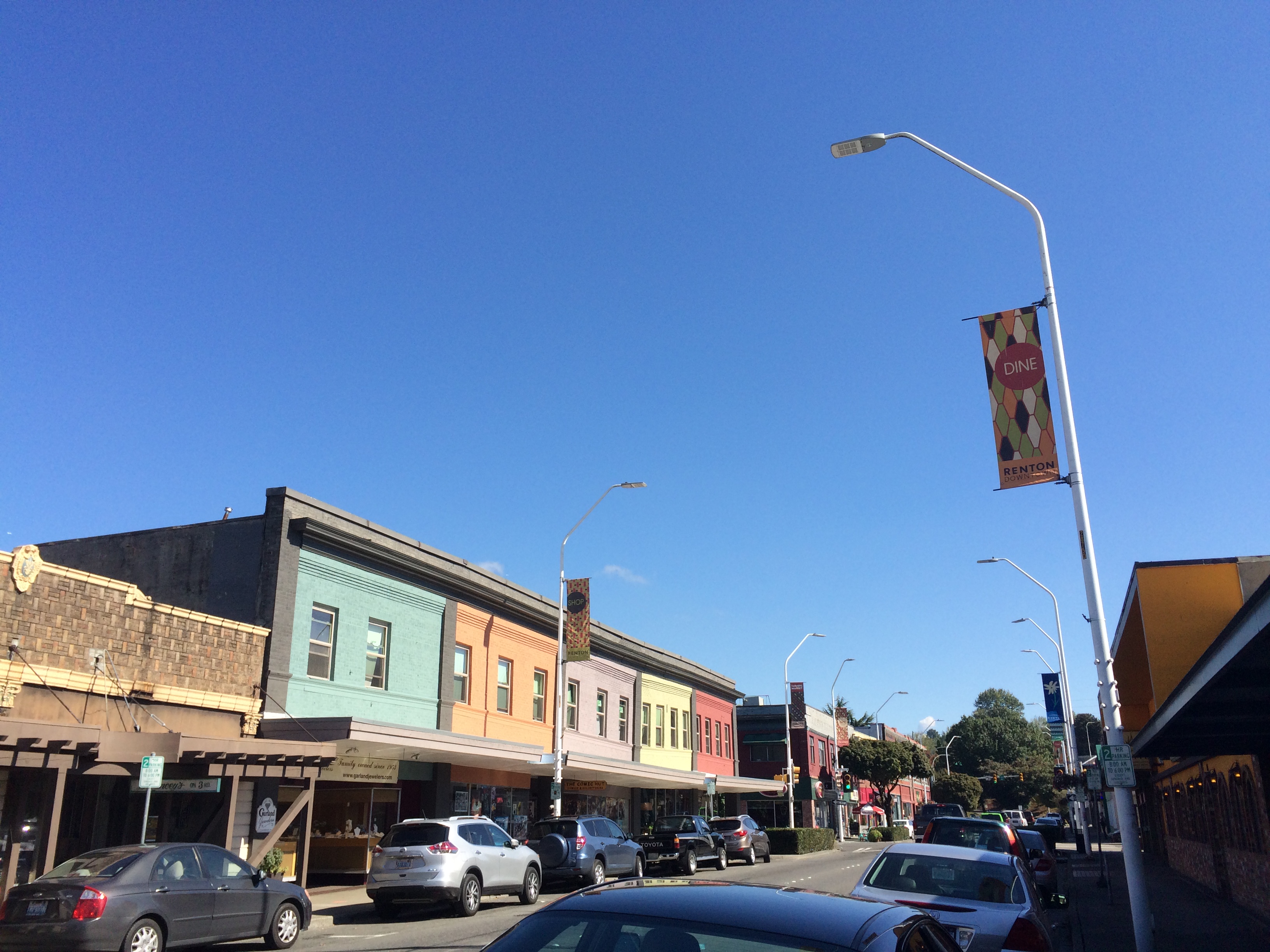 Renton is one of our metro area’s fastest growing big cities. According to the Puget Sound Regional Council, only Seattle, Bellevue, and Federal Way grew faster in 2017. The city’s population has more than doubled since the 2000 census–propelled in part by annexation–and city government has been struggling to adapt. Given the obvious physical and political constraints on future development in the hinterlands, Renton has begun to look toward its historic downtown to absorb some of its new growth.

Like many downtowns, Renton’s has long suffered from disinvestment and the resultant blight. But between private investment and a variety of City and County sponsored initiatives, there is renewed momentum for a renaissance.

Earlier this year the city council unanimously adopted the Civic Core Vision and Action Plan, an ambitious blueprint for a repopulated and resurgent downtown. The plan calls for transit revisions, streetscape improvements, investment in public art and place-making, promoting Downtown Renton as a regional cultural destination, and a robust effort to connect the city’s green spaces with a multimodal trail through Downtown Renton.

If you’ve ever taken a bus or driven a car through Downtown Renton, you probably noticed that most streets are one-way with multiple lanes of traffic. The conversion to one-way occurred in the 1960s, when Downtown Renton was struggling economically, and was meant to facilitate the swift movement of automobiles through the neighborhood. The results of this approach are most powerfully along 2nd Ave S, where four lanes of one-way traffic zoom past the stately Renton High School on a boulevard-style street complete with a leafy median.

Today, Downtown Renton businesses are beginning to thrive once more, and the City hopes that the conversion back to two-way traffic will help to nurture the growth of a robust and healthy pedestrian-oriented city center. Along with the traffic revision, the Civic Core Plan calls for wider sidewalks, improved streetscapes, and minimizing off-street parking. There are also plans to encourage more sidewalk seating for restaurants and bars, adding visual interest to the street, and improving the permeability of downtown storefronts.

A goal central to the success of the Plan is the improvement of downtown’s public spaces. This begins, appropriately, with the park known as The Piazza, located in what the Plan refers to as the “Heart Block.” The park was established in 2000, but has been underutilized since it opened to the public. Apart from the popular Tuesday afternoon farmers market, The Piazza sees little meaningful use. The Civic Core Plan calls for a complete redesign of the park to improve the connections between space and surrounding streets, as well as the adjacent “Gateway Park,” which the City would like to use as a permanent food truck pod and outdoor dining area. The redesign would also focus on programming in The Piazza, including providing games, flexible seating, a mobile library, and interactive water features.

The Piazza would also become the focal point of a new multimodal trail connecting the existing Burnett Avenue Linear Parks to the north and south. This will provide continuous protected bicycle and pedestrian infrastructure through the neighborhood while linking the residential neighborhoods around downtown with new green space.

South of the Piazza, the City envisions additional green space linking King County’s Lake to Sound Trail to the Cedar River Trail. The intersection of S 4 th St and Burnett Ave S will be known as “The Junction,” and will provide seamless access to an assortment of regional trails from Renton’s downtown core.

Despite the fact that light rail will not be coming anywhere near Renton in the foreseeable future, the downtown core is fairly well connected by transit, at least to nearby Seattle and Bellevue. More than 3,000 people pass through the Downtown Transit Center on an average weekday. The Civic Core Plan calls for a number of transit revisions to the downtown core, and the original impetus for the plan was the planned relocation of the transit center to a site adjacent to the existing South Renton Park and Ride, part of the regional Sound Transit 3 program.

While on its face this may seem counterproductive from a transit advocate’s point of view, the site is still walking distance from downtown, and will provide a quicker transition between I-405 and the city’s core. This, the City hopes, will benefit commuters bound for other cities in the region, currently subject to the circuitous morass surrounding the existing transit center. Transit routes will continue to serve downtown, but bus layovers at the existing transit center will be eliminated, and reroutes will direct bus traffic along more direct routes. Combined with the restoration of two-way traffic on downtown streets, this move is designed to make Renton more accessible by transit.

The City’s long term goal is to free up space downtown for more mixed-use development, and to improve bus connections with other major cities in the region.

The Plan is generally pretty light on specific project proposals, but one idea is worth pointing out. A former auto shop located between the Piazza and the Downtown Transit Center was converted several years ago into an event space. Owned and maintained by the City, The Pavilion is currently used chiefly by Rain City Catering for private events. While it remains a successful enterprise, it is utilized on just a handful of occasions, and is not generally open to the public. The Civic Core Plan aims to change that. The Plan includes a proposal for a year-round public market inside the Pavilion modeled on other successful public market projects like Pybus Market in Wenatchee. This would require major renovations to the structure, but would be transformative for the neighborhood and generate synergy between the flourishing retail on nearby S 3rd St, the Piazza, and the transit center.

After the transit center is relocated, the City plans to open up the land behind the Pavilion to developers. In the interim, this space will be utilized as a pop-up park that the Civic Core Plan has branded “The Backyard.” The temporary space will be geared toward families and children, and will feature inexpensive pop-up elements like miniature golf, flexible seating, and temporary landscaping.

Another major theme of the Civic Core Plan is the integration of public art in Renton’s downtown. The plan reflects the City’s recent commitment to focus on art as a tool for building community and connecting neighbors.

Owing to its somewhat haphazard approach historically, Renton now wants especially to engage with local artists and include community engagement as a part of any new public art effort. The City’s goal is to implement art projects downtown that reflect the community and serve as neighborhood touchstones, as opposed simply placing art with no particular connection to the City or its residents. Early efforts at adding public art to bolster fledgling redevelopment include several murals painted on downtown buildings, an outdoor art gallery, and vinyl wraps on traffic signal boxes.

The Old City Hall location near Renton’s iconic library represents an important opportunity for Downtown’ Renton’s redevelopment. The 1960s-era office building on this City-owned site is deteriorating, and the City has lined up a developer to replace the structure with three new mixed-use buildings, one of which will rise to 12 stories. The current tenants, a private school and a sexual assault resource center will be relocated temporarily and offered space in one of the new buildings. The development proposal also includes a new waterfront park and a public plaza to stitch the project together.

It remains to be seen how swiftly the Civic Core Plan can be implemented, but the policy changes it outlines would be transformative for Downtown Renton. As the city continues to grow, it is poised to become a major player in the regional planning milieu. Here’s hoping that city government continues to look forward and develop long-term strategies to promote a healthy and lively downtown.

Tour Renton with The Urbanist

If you want to learn more about Downtown Renton and it new civic plan there will be a walking tour on August 4th. Join The Urbanist and staff from the city government in exploring Renton’s resurgent downtown and what the Civic Core plan envisions for it in the years ahead. Tickets and more information can be found here. You can also check out our whole slate of events on Facebook.

Anthony works for the City of Renton.