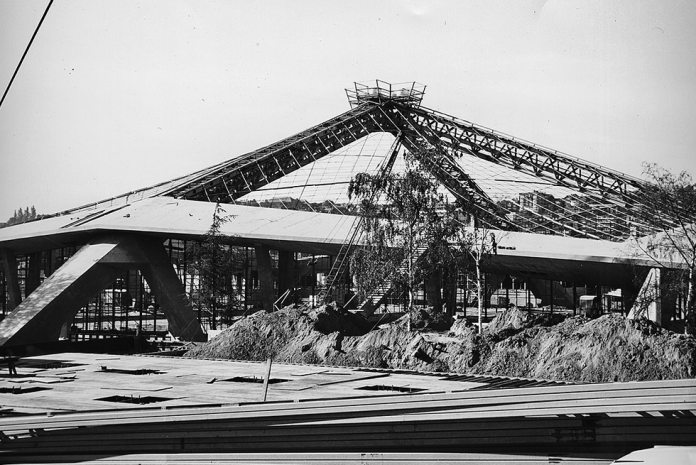 On Monday, the Seattle City Council approved a slate of landmarks in Uptown and rezoned a property in Greenwood to facilitate a mixed-use development proposal. The city council also hotly debated the introduction of a new ordinance to temporarily the Pike Place Market landmark district to cover the Showbox site on First Avenue, which could be redeveloped for apartments in a new highrise building.

In Greenwood, a developer sought a rezone for a split-zoned site primarily facing Greenwood Ave N (7009 Greenwood Ave N). The objective of the contract rezone was to allow development of a six-story mixed-use building on the eastern half of the site. The proposal includes 35 dwelling units and associated residential space and 6,000 square feet of ground floor commercial. A unique element of the ground floor will be an open courtyard in the interior where commercial spaces will open onto.

The Key Arena has been formally landmarked, a key step in the process to permit major renovations to the building and site. Preservation controls will generally apply to the exterior of the building to retain iconic portions of the structures. However, the renovations mean some changes to the structure with approval. Preservation controls also apply to a larger portion of the site, but not all structures need to remain and gain approval for demolition. As a major centerpiece of the World’s Fair at Seattle Center, the building has become an important architectural and historic element of the civic complex, in part due to its ongoing use since. But the building also retains unique modern architectural features from the mid-century era it was constructed in.

A few blocks from KeyArena, the Bressi Garage (226-232 1st Ave N) also received landmarking. The Landmarks Preservation Board found that the structure was architecturally and culturally significant to merit preservation. The building is technically two structures with a shared wall. The original purpose of the structures was for car parking in an era when off-street car storage wasn’t terribly common for older mixed-use buildings. It later became a truck rental facility and then was purchased as part of the World’s Fair. The garage is the one of the few remaining buildings from the era preceding the World’s Fair era in the immediate area. Preservation controls will apply to the building exterior and the interior roof trusses and decking.

At the meeting, Councilmember Kshama Sawant introduced fast-tracked legislation to preserve the Showbox in response to widespread community concern that a possible-but-not-yet-filed redevelopment proposal might mean the end of the popular music venue. Her proposal expands the Pike Place Market Historical District Boundaries on a temporary basis until a more detailed study can be completed. Imposition of the new boundaries would mean that the Showbox site, in addition to any other sites, would immediately be subject to the historical district board for any changes of uses, interior elements, and building exterior. This would essentially skip the entire landmarking process for now until a study could be completed.

Yeserday afternoon, a city council committee massaged the legislation by shortening the window of the temporary boundary extension to 10 months instead of two years and specifically limiting the historical district boundary to include the Showbox site exclusively instead of any other properties along First Avenue.

The Showbox site is just a half-block away from the iconic Pike Place Market entrance and immediate opposite the existing historical district boundaries. Onni Group, a Canadian firm, recently filed a pre-application that speculated on removal of the structure and construction of a 442-unit, 440-foot tall highrise. The group had intended to submit a landmarking application to see if the Landmarks Preservation Board would designate the site prior to going through the actual design review and land use application process.

There is some concern from community that the overall historical district is at risk to lose its character, in part because of a recent development proposal at the intersection of First Avenue and Pike Place getting approval to remove the existing in-character brick facade structure and replace it with a modern brick facade podium and highrise.

The Showbox legislation is likely to appear before the full city council next week, but has more time to act before the Onni project would have vested in October, so they may decide to hold off, as several councilmembers suggested at the meeting. Councilmember Sawant, however, has suggested there’s no reason for delay.