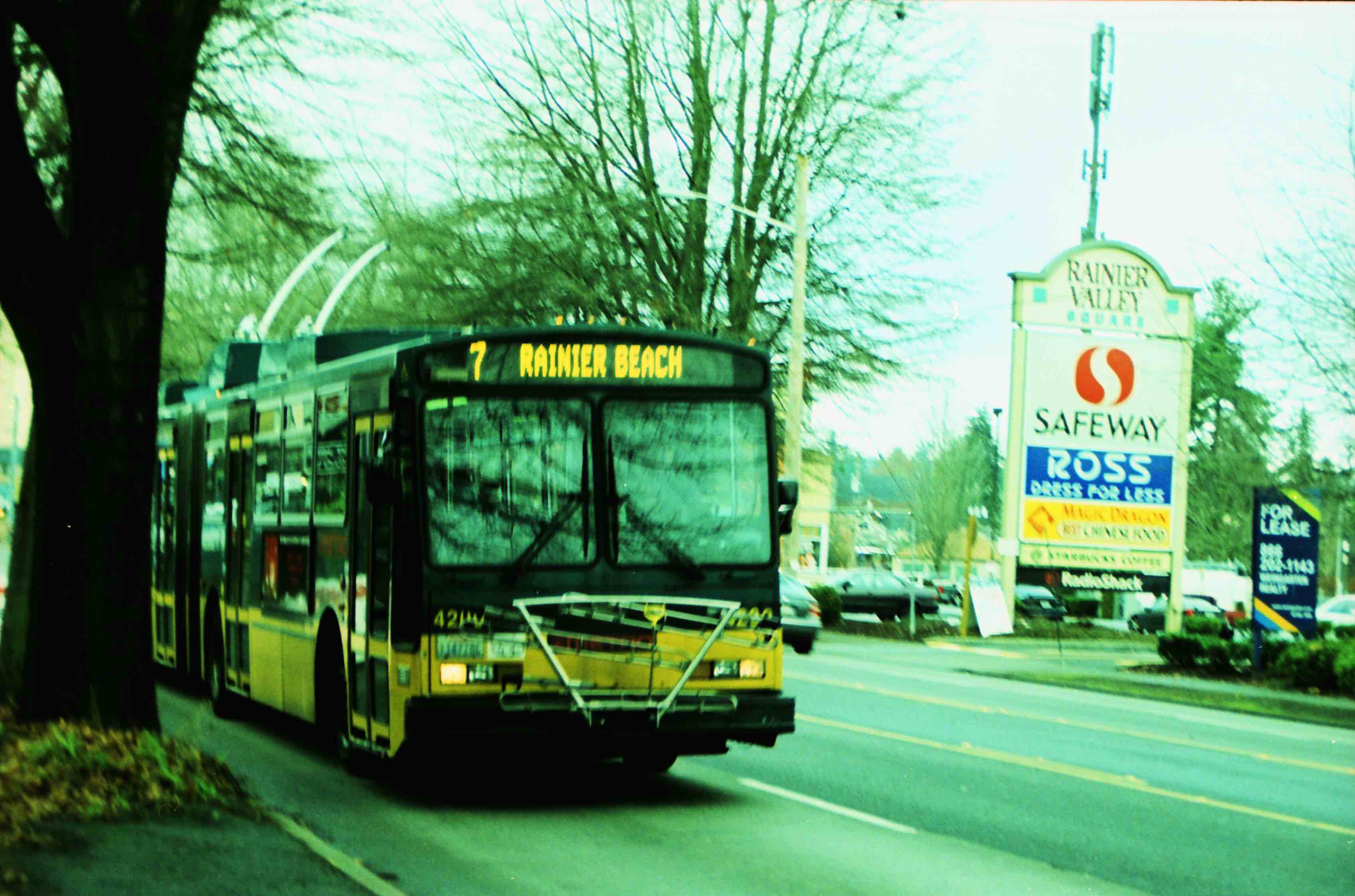 ​She stepped aboard, wrinkling her nose. “What is that smell? Something’s gone absolutely rancid in here!”
“Ooh, rancid,” I said. “I love your word choice!”
“Well, that’s what it is, ain’t it?”
“You got that right, I s’pose.”

I knew something was up, but I hadn’t given it much thought. We were the 7. It’s part of the contract. When you board a 7, you have to sign up for the fact that it might be loud, it might get unpleasant, or it might smell, erm, potent. But we make it through. Sometimes we even learn something. I thought the scent was Ibrahim in the back, rolling some Spice- not smoking it, you understand, just handling it. The stuff reeks. But it wasn’t Ibrahim. Nor was it one of my two friends who happened to be riding that night, who thought he himself was the culprit; he was still sweating from the hot sun earlier.

It was Fish Guy.

The man in question, along with everyone else except my two friends (one an operator, the other a barista), had just left. We were at the Rainier Beach terminal.

My dear barista companion expounded. Turns out everyone knows Fish Guy. She, by somewhat remarkable happenstance, had ejected him from her café earlier the very same day. He’d been abusing their restroom.
“Wow,” I said. “That dude?”

This happens to me semi-regularly. A lot of my acquaintances are characters– men– of the so-ruff-so-tuff urban street variety, and around me they’re often on their best behavior. I respect them and they feel it, potently. I think they’re great, because when I see them, they are.

Then I hear about them being horrible when I’m not around. But it’s my job to put that aside. I know they’re not always angels. I need to be naïve, in order to do what I’m doing correctly. In order to give them the positivity they’re not getting elsewhere. I’m lucky that way, able to offer a space that can be loitered in, soiled, that I don’t have to clean up.

As an operator, there’s no great urgency to pick these guys up, since they’re not actually going anywhere, but neither do you want to pass them all by, effectively dumping them on your follower. That’s bad manners. Plus, I like having a few faces on the bus who know me. It’s proved helpful. Waking them up can be a hassle (but so can letting them sleep– you become a roving hotel and don’t have room for your Destinational Passengers), but if your biggest problem of the night is waking up sleepers, you’re doing great.*

Tonight I only have half a trip left, from the bottom of Rainier Valley back up to Vietnamtown/Chinatown. I’m two minutes in front of my follower, Sean, who still has several hours left in the night to drive. He and I have a routine.

It’s called the “Shake’n’Bake.” To make his life easier, he and I skip-stop our way up Rainier, alternating the stops we serve and splitting the passenger load between ourselves, thus speeding up the travel time for both coaches.** It’s beautiful.

“Shake’n’bake?” Sean asked, at the terminal.
“Let’s do this!” I responded excitedly. I love helping other operators.

I turned the corner, arriving at what is basically the first stop inbound. Naturally, Fish Guy was there, waiting to go back up the street. So were a bunch of other people. Sean would be here in a minute or so.

“There he is! Just like you said!” I exclaimed to my operator friend, still onboard. I began slowing down.
“Skip this, I don’t wanna smell that all over again!”
“Do we give him to Sean?” I asked.
“Give him to Sean!”
“I can’t give him to Sean. Sean has to work five more hours. I’m off in thirty minutes!”
“Actually, Sean’ll skip him too. That means he goes to Amy.” Amy’s a newbie, and Sean’s follower in tonight’s sequence. She’s delightful.

“Oh my gosh,” I said, “I’m not giving this guy to Amy! That’s… no. Sorry guys. I’m gonna get him. Is that cool?” I started laughing. “We can’t give him to Amy, are you kidding me? Plus Sean’s a nice guy, he has other stuff to worry about.”

I opened the doors. Did he reek? I won’t say he didn’t. I think I’ve developed a tolerance. But he wasn’t a bed of roses, let me tell you.

“Hey, my friend,” I yelled, holding my breath by reflex. “Come on back in!”

He grinned, gathering his coat in handfuls, slinging a bag and backpack over a tattered shoulder and slithering in through the doors. I can hardly remember the colors of his clothing; he was beyond color. With enough debris and forgotten time, green, black and brown begin to take on the same meaning.

I love the sensation of helping my fellow brothers and sisters behind the wheel. I’d like to say it’s selfless, but who can deny the altruistic high of magnanimous acts? Who will tell me it doesn’t feel fabulous? There are worse impulses to act on. My friends were both dears, and understood completely.

But that wasn’t the main reason I welcomed Fish Guy. The primary reason stemmed from brotherhood of a different sort. I knew him from before these folks did. I knew him before he was Fish Guy. I flashed to the first night I took note of him.

He was a chubby dark-skinned man, Haitian maybe with the accent, balding, in tatters, being detained by two police officers.
“Just one second if you would,” the one said to me, as I waited with open doors at Fifth and Jackson. “This guy matches a description… we gotta sort something out here.”
“Sure thing, officer,” I said.

I listened to the detainee. He was monologuing, and I gradually put together what was going on.

That moment will be what always first comes to mind when I see him. He was a man trying to prove he was who he was.

And he was right.

*The footnotes were getting too long– and too interesting! They’ve been expanded into an upcoming post. Stay tuned!