On December 20th, the Sound Transit Board of Directors met for their for final action agenda of 2018. The board authorized several significant motions, such as purchase of new vehicles, surplus of unused property, commencement of early construction work on a segment of the Lynnwood Link extension, and authorization to acquire a new passenger and digital information sign system.

Sound Transit will also acquire an additional 31 60-foot hybrid articulated buses from New Flyer, expanding the total fleet by six buses. The fleet acquisition will replace 25 existing buses, including 22 bendy buses that were put into service in 2004 and several 40-foot buses dating from 2005 and earlier. The new bendy buses should be delivered around July 2020 and put into service shortly thereafter. Total cost of the purchase is estimated to be $38.82 million.

Stacy and Witbeck-Kiewit-Hoffman (SWKH), a Joint Venture, has been awarded the first of three construction packages to construct a 4.5-mile segment of the Lynnwood Link light rail extension between Northgate Station and NE 200th St. SWKH will also construct two station in Shoreline. This first construction package, however, is focused on early civil construction work like utility relocation, construction access, demolition, wetland mitigation, and grading and erosion control, prior to guideway construction slated for Summer 2019. The total project cost authorized is $88.15 million.

Sound Transit has been coordinating with an unsolicited buyer of surplus property adjacent to Beacon Hill Station owned by the transit agency. In August 2017, Pacific Housing Northwest, LLC approached Sound Transit to purchase a 2,256 square foot site just east station head house, near the southwest corner of S Lander St and 17th Ave S. Part of the site is already developed with landscaping and an emergency vent shaft. The site is bounded by an alley just to its west and two lots owned by the developer to the south.

The Sound Transit parcel is actually 7,975 square feet, meaning a lot line adjustment will be required to transfer property to the developer. The property will be sold for $260,000 and facilitate construction of a mixed-use development.

The developer is already proceeding through the design review and development permitting process with hopes of approval before July 2019 and construction completion in September 2020. A total of 95 dwelling units and 1,500 square feet of ground floor commercial space are planned as part of the project in a six-story structure. Though no parking is required and the development site is next to a subway station, the developer is still proposing 39 off-street parking spaces unlike the developer’s other site on the opposite side of the alleyway and south of the subway entrance.

Sound Transit is contracting with ARINC to deliver a new passenger information management system (PIMS) in addition to replacement and deployment of new digital information signs and public address systems. All existing digital information systems at light rail and Sounder stations will be replaced with higher tech versions capable of displaying color. This is important because light rail trains will be identified by their line color (e.g., red, blue, and green) as the Link system expands. Sound Transit also wants the digital signs to be capable of displaying the destination, train size, and passenger load.

The PIMS will be designed to push that type of information to online sources and public transit data feeds (e.g., Google Transit, Transit App, and OneBusAway). Real-time and predictive arrival information will be managed by PIMS and should be greatly improved allowing for accurate countdowns at all stations.

In addition to usage on trains, the systems will be deployed for usage for the future bus rapid transit lines and parking facilities. Full implementation of the new PIMS on Link should occur prior to the East Link opening in 2023 and systemwide before 2026, but individual services may receive earlier implementation. The total funding authorization for the program is $30.8 million.

Sound Transit approved a contract with the Washington State Department of Transportation to begin environmental review, early engineering, community outreach, and permitting for the future freeway station at NE 85th St and I-405. The freeway station is planned to offer direct access to the interstate for buses with ramps to NE 85th St. A stacked highway would essentially be constructed with NE 85th St at the bottom, a roundabout with ramp to NE 85th St in the middle, and I-405 flying over with high occupancy ramps to the roundabout below. The contract is set at $13.6 million.

A $2.9 billion budget was approved for 2019. The bulk of this will be for capital projects clocking in at $2.44 billion, with a smaller $345.4 million for operations. System expansion projects consume almost all of the capital budget with $2.2 billion in planned works, including:

Great reporting, Stephen! Love the continued dedication to on the ground reporting. Not sure where else I could have read about these decisions.

Looking forward to the new passenger information display systems. I’ve been loving some of the systems in other cities, like Munich. Might make a great future article to compare these visual display systems across different metros, highlighting features that are worth including in Seattle. Number of cars and how full they are would be especially useful, and looks like it’s already included in the requirements.

Here’s an example of a Munich display for their S-Bahn. Even has a handy airport indicator 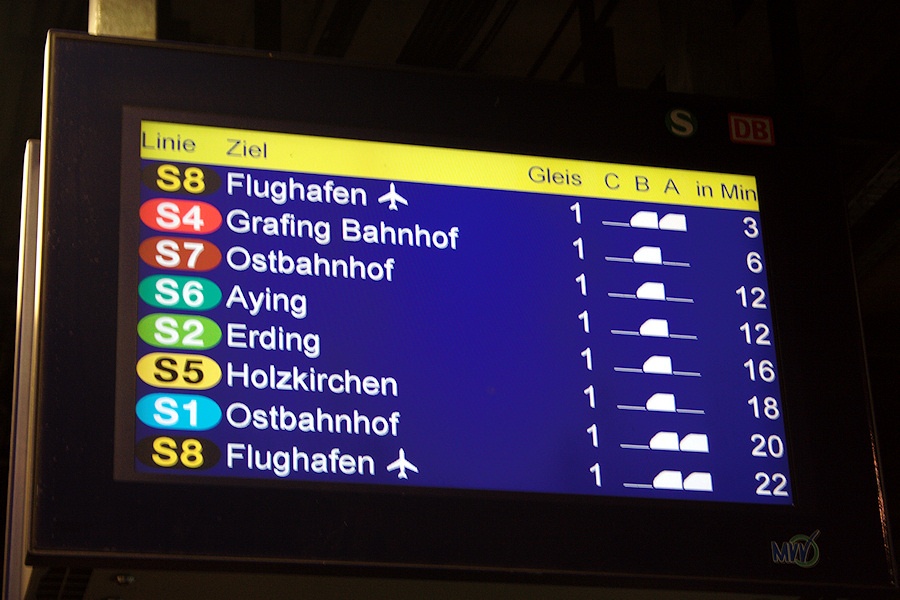 This is pretty great. Clean and easy to understand. I think a feature article on this topic would be excellent. Lots of wonderful examples of how to display next train/bus information.

If you’re looking for a slate of bold progressive urbanists up to the task of the housing and climate emergency, we’ve got them. Read our General Endorsements here.

ABOUT US
The Urbanist serves to examine and influence urban policies by promoting and disseminating ideas, creating community, and improving the places we live. Founded in 2014, the organization provides daily news coverage and opinion in the advocacy journalism tradition along with social and educational events. The Urbanist is based in Seattle and registered as a nonprofit 501(c)(4) entity.
FOLLOW US
Except where noted otherwise, all content is licensed under a BY-NC-SA 4.0 license.
wpDiscuz
Loading Comments...