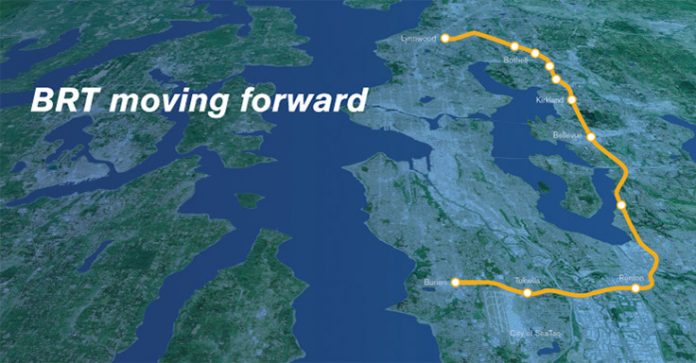 Sound Transit has launched another round of open houses for the I-405 Bus Rapid Transit (BRT) project to get feedback on station access improvements. The transit agency has also unveiled station refinements, providing more detail on what types of roadway, transit priority, and bus stop improvements might be made. The online open house will be open for comment through February 14th.

Sound Transit plans to operate the I-405 BRT corridor from Lynnwood Transit Center (referred to as “Lynnwood City Center” in planning documents) to Burien Transit Center as two separate lines, meeting in the middle at Bellevue Transit Center. The I-405 BRT is expected to go into service sometime in 2024. A total of 11 BRT stations will be served along the corridor, essentially at locations currently served by ST Express Routes 535 and 560.

The BRT corridor will provide connections to other high-capacity transit options, including ones that the transit agency will open in the next few years:

Sound Transit hopes to provide a reliable and fast bus experience by taking advantage of more direct highway access and managed lanes. In cooperation with the Washington State Department of Transportation (WSDOT), the transit agency has been coordinating on the kinds of facilities that should be implemented on I-405 to keep buses moving quickly.

A key aspect to reliability is tolled lanes on I-405. Known as “express toll lanes” or (ETLs), WSDOT charges tolls for certain lanes in relationship to demand. If speeds fall below, the price rises to keep high occupancy vehicles (i.e., transit, motorcycles, and vehicles with three or more passengers) moving at target speeds. So far WSDOT reports that ETLs are operating largely within target.

ETLs have been implemented from just north of Totem Lake/Kingsgate in Kirkland to Downtown Bellevue. WSDOT plans to add ETLs south to the SR-167/I-405 interchange in Renton. This would functionally add highway lanes and replace existing high occupancy vehicle lanes (HOVs).

It bears mentioning that adding new lanes, whether tolled or not induces more demand, congestion, and sprawl, so the policy is a dubious one at best.

The remainder of the I-405 corridor would generally see buses use general purpose lanes and HOV lanes, depending upon reliability and stop location. In some instances, buses could divert to “bus on shoulder” lanes. A segment on southbound I-405 already exists today from Canyon Park in Bothell to Brickyard in Kirkland. WSDOT plans to extend that segment further north toward a location just south of the I-5 interchange.

Since the summer, Sound Transit has been hashing out details on how to serve BRT stations along the I-405 corridor. Most station locations have gotten refinements, including specific investments that could be made to provide better stops for riders and bus access to them.

In Lynnwood, Sound Transit is considering two roadway improvements: one on 44th Ave W to access the Lynnwood Transit Center and another from 196th St SW and Poplar Way to I-5. The latter would make improvements to the northbound on-ramp. Buses would stop at the existing Lynnwood Transit Center. Bus riders would be able to connect with local bus routes, Community Transit’s Swift Orange line, and Lynnwood Link light rail line.

In Canyon Park, Sound Transit has been working with WSDOT to determine several improvements for the station there. The baseline plan calls for improvements to off-ramps and transit signal priority at stoplights. Bus bays would be located where they are today. Bus riders would also be able to connect to local bus routes and Community Transit’s Swift Green BRT line.

However, it is possible that inline freeway stops could be constructed at the interchange. WSDOT is planning to build new ETLs at Canyon Park and could incorporate median freeway stops as part of that project. This would save buses a modest amount of time and avoid needing to weave to the far edges of the highway to exit to off-ramps and back again to the center of the highway.

Changes at UW Bothell/Cascadia College would be focused on small adjustments to the on- and off-ramps in addition to the NE 195th St overpass. Bus bays would be located where they are today.

Sound Transit is planning to use the Totem Lake/Kingsgate freeway stops at the NE 128th St overpass for BRT. The nearby park-and-ride lot would get a new parking structure, adding 400 parking stalls for a net total of 600 stalls.

Sound Transit is not planning any notable changes for the Bellevue Transit Center since it already has direct access to I-405 and priority for transit. The BRT stations would be located at the existing transit center. East Link light rail will open in 2023 across the street from the transit center, and several local and regional bus routes already serve the transit center, including King County Metro’s RapidRide B Line.

At NE 44th St in Renton, Sound Transit and WSDOT are planning to provide direct-access ramps from I-405 to the NE 44th St overpass. BRT stations would be located on the southbound on-ramp and northbound off-ramp. On the west side of the highway, a new park-and-ride facility would be constructed, providing 200 parking stalls.

Unlike Route 560 which serves the Renton Transit Center in the city center, the I-405 BRT line is planned to stick closer to I-405, saving buses travel time. The line will directly serve the South Renton Park-and-Ride. A new transit center would be constructed there, albeit closer to Rainier Ave S, the main street running to I-405 and SR-167. The transit center will include a new 700-stall parking garage and several local and regional bus route serve the site, including Metro’s RapidRide F Line.

I-405 BRT will serve Tukwila International Boulevard from SR-518. A new freeway station will be built near the existing overpass. Sound Transit plans construct a pedestrian bridge that would help connect bus riders with the Central Link light rail line just north of the highway. The station is served by several local and regional bus routes, including Metro’s RapidRide A Line.

At the very south end, I-405 BRT will serve the Burien Transit Center using existing facilities. High occupancy vehicle lanes in the eastbound direction to SR-518 are proposed. A small stretch of them is also proposed in the westbound direction on SW 148th St. In a few years, Metro’s RapidRide H Line will open to provide a high quality service to areas north of Burien.

Sound Transit wants feedback on how to improve access to BRT stations. The online open house has an interactive map where visitors can leave pinned comments on issues like missing sidewalks, poor lighting, lack of curb ramps, and other needed facilities like pedestrian crossings, bike lanes, and other connections. The interactive map already highlights known issues to Sound Transit, but encourages comments on others within a half-mile of BRT stations. Comments are due by February 14th.