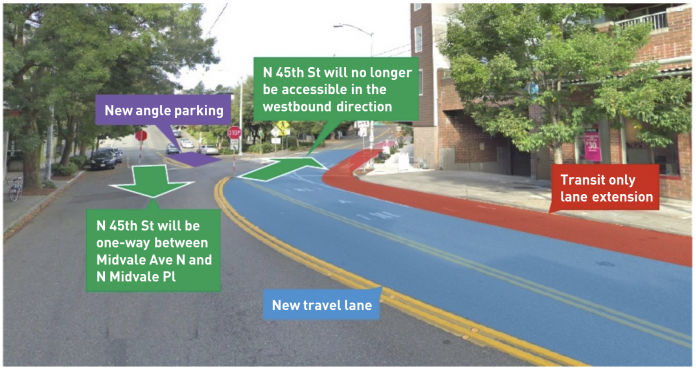 An extended transit-only lane is in the planning process for Wallingford. The Seattle Department of Transportation (SDOT) is proposing a small rechannelization of N 45th St between Midvale Ave N and Stone Way N, which could reduce dwell times in the westbound direction for Route 44, a workhorse in the King County Metro system.

The existing bus lane in the neighborhood picks up a half-block west of Stone Way N as N 45th St bends north and turns into N Midvale Pl. That westbound bus lane extends as far as the Green Lake Way N intersection and includes a queue jump, the result of earlier corridor improvements for transit implemented several years ago.

The vehicle-to-vehicle conflicts would be reduced in several ways:

Rechannelization, as proposed, does mean changes for pedestrians. The existing midblock pedestrian crossing at the awkward bend-intersection would be moved back a half-block west on N Midvale Pl, which could mean longer walks for some people. This configuration realistically could result in safer crossings since the intersection at Midvale Ave N is more obvious to people driving. SDOT would also install a pedestrian crossing connecting the south side of N 45th St to the triangle island, which strangely is missing the marked crossing.

Under the preliminary schedule, improvements are planned for installation in winter 2020.