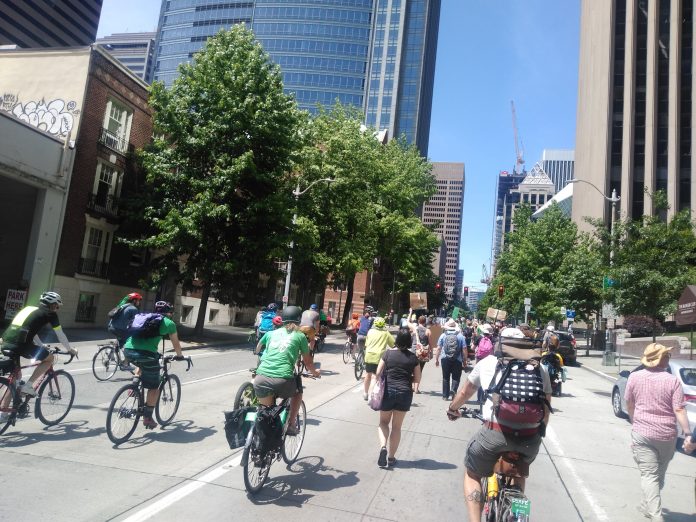 After months of work, four community meetings, and a lot of prodding from all sides, Seattle finally has a bicycle master plan implementation plan for the remainder of the $930 million Move Seattle levy. We know know that the City is officially betting on only completing half of the 50 miles of protected bike lanes that were promised when voters mulled filling in the bubble on their ballot in the fall of 2015.

A letter signed by Mayor Jenny Durkan and Seattle Department of Transportation (SDOT) Director Sam Zimbabwe introducing the final plan touts 50 miles of facilities to be constructed through 2024 as “prioritized, responsible, and realistic” and states that “we will continue seeking additional revenue sources and grants to advance these key connections.” The letter is the first time that the Mayor has signed her to a statement in support of finding additional revenue for the Bike Master Plan or BMP, with her voice notably absent when the initial draft came out.

The funding gap for meeting levy goals is much narrower than other unfunded mandates that the Mayor has come out in support of, perhaps most notably a $700 million light rail tunnel in West Seattle for which Mayor Durkan says “the city of Seattle is committed to getting third-party funding.”

The document is both incredibly meaningful in that projects that aren’t included on it are very unlikely to see progress anytime soon, and not meaningful in that the implementation plan has made many promises before that weren’t kept. The lines on the map also frequently end up watered down as the on-the-ground reality of parking and level-of-service (for cars) concerns beat out any master plan vision. The last we saw of plans for a protected bike lane on E Union St there was a pivotal two-block gap in the facility that isn’t reflected in the master plan.

But what’s changed since the proposed draft was released two months ago?

After four meetings to elicit feedback on the draft plan, the resounding message from the community was that connecting Southeast Seattle to the rest of the city was a priority for people in all sections of the city. SDOT in coordination with the Mayor’s Office (in an opaque process) had previously rejected the Seattle Bicycle Advisory Board’s top recommendations for making this happen.

Now the department proposes building a protected bike lane that will connect the Mountains-To-Sound trail adjacent to I-90 with the Mount Baker light rail station at Rainier Avenue via MLK Jr Way S. This would be funded in conjunction with the Vision Zero corridor program, essentially doing what the Levy Oversight Committee recommended last month: finding ways to utilize existing funding sources together to expand the bike network. The lane could extend even further south to S Alaska St at Columbia City Station. SDOT is still studying the corridor and would likely not construct this facility until closer to the end of the levy in 2024.

SDOT has also apparently moved other Southeast Seattle connections into “pre-planning,” including three separate segments of Beacon Ave S and a Downtown to Georgetown segment. Based on the fact that the department disregarded these corridors in the initial BMP draft, it clearly views considerable hurdles for moving these projects forward, namely construction funding. But placing them in the bucket of next-in-line projects means advocates for these projects will have something to point to moving forward.

The repaving projects certainly didn’t add bike infrastructure in the way that it might if a network was being designed, and compromises upon compromises were made to get those projects to fruition: people on bikes will need to use sidewalks through bus stops, and the protected lanes completely disappear at major intersections.

While this plan gets District 2 to near equity with other districts in terms of lane miles of protected bikes lanes funded by this levy, there is still a long, long way to go from here.

Hidden in today’s council presentation is a note that the perpetually-delayed 4th Avenue protected bike lane has been downgraded to a one-way bike lane, northbound. This is simply unacceptable: a two-way protected bike lane was the outcome of a years long collaborative process between multiple agencies known as One Center City. The advisory group for that process signed off on recommending the two-way bike lane as part of a comprehensive plan for downtown mobility.

After that process, the public was told the design for 4th Avenue was taken to 100% and only put on hold after Mayor Jenny Durkan took office and asked that it be shelved. We were told transit would be impacted by installing it sooner than 2021, despite the data presented to One Center City that showed the new 5th/6th Avenue transit pathway would improve travel times for transit even with a two-way protected bike lane.

The bike lane has been designed. It’s time to make it happen. A one-way 4th Avenue will cause the entire Center City Bike Network to fall apart. Given the Mayor’s past performance on this issue, it’s hard not to wonder if that’s the purpose.

2nd Avenue May Finally Connect to Something

The most positive thing to come out of the update is the southern bike connection to the 2nd Avenue spine through downtown. The official Bicycle Master Plan route planned for this connection is 4th Ave S and 5th Ave S, both key bus routes. In October, we wrote about how SDOT was moving forward a route that completely ignored this, forcing people on bikes to take a detour up a steep grade via 6th Ave S and S Main St.

The new implementation plan puts the north-south connection to S Main St on 5th Ave S (shown as #54 in the map below). It also schedules it for completion in 2019, which is fairly ambitious but it’s hard to think of a better connection to make right away than extending the most heavily-used bike route through downtown all the way to the relative calm of S King St. A King Street neighborhood greenway with additional traffic calming is scheduled for next year, though design elements for that are still up in the air.

As of right now, there is no identified funding source to connect the existing waterfront bike trail at the Olympic Sculpture Park to the planned waterfront trail downtown being planned as part of the new waterfront. Despite the Durkan Administration giving away $40 million to Waterfront LID payees to reduce their rates–and a number of other projects not directly related to the waterfront planned with the proceeds–we have not finalized a way to pay for this crucial connection. Hoping that this is, as Tom Fucoloro suggested, a joke.

Extending the protected bike lanes on Pike and Pine Streets in 2019 was something promised by SDOT since last year. It was ambitious, but it matched the timeline laid out by the Council’s resolution on the Center City Bike network last year. Now the BMP update confirms that a key three-block segment between 6th Ave and 9th Ave will not happen until next year.

On Sunday, hundreds rallied below Jenny Durkan’s office to push for the administration to do more to accelerate projects that will make our streets safe and reduce the biggest source of city-emitted carbon. Councilmember Mike O’Brien has six months left in office and seems ready to try to make things happen. It will not take a significant amount of money to keep the bike master plan on track. The important thing is making the tough choices that will not stunt the growth that the city has seen in people biking. SDOT loves to tout those numbers, but for the past several years that cheerleading has rung very hollow. It’s time to back up our rhetoric with action. The plan as it is now is not acceptable.

The updated bike master plan implementation schedule is headed to the Transportation and Sustainability Committee today at 2pm.