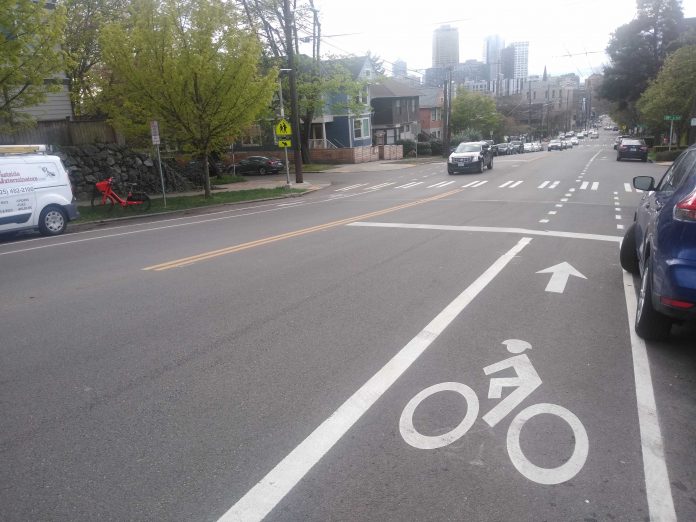 Last we heard the City was prioritizing connecting the bike network with important “nodes.” That’s what Seattle’s new transportation director Sam Zimbabwe said when explaining how the department whittled down the list of bicycle safety projects promised in the Move Seattle levy to the confessed list of what’s actually possible. But then news broke that supposed priority E Union Street is getting an incomplete design that won’t connect to any other protected bike lanes.

The Seattle Department of Transportation’s new implementation plan has shown protected bike lane on E Union Street running from 13th Avenue in Capitol Hill all the way to Martin Luther King Jr Way in the Central District. However, SDOT has released its initial proposal for the eastern segment (picking up where the Madison Rapidride project leaves off on the Central District side) and it seems to fly in the face of everything that the department has been touting about its implementation plan creating full connections and all-ages-and-abilities facilities. The proposal includes a two block gap right in the middle of the corridor, on either side of busy 23rd Avenue, and doesn’t connect at all in the eastbound direction to MLK Jr Way.

For a little background, when the proposal to add a RapidRide line to Madison Street was first being developed, bicycle facilities as part of the multimodal corridor were ruled out on Madison itself. A number of other bike facilities that were “complimentary” to a street that cuts diagonally across the city like no other street were developed: Union Street bike lanes were one of them. The further along the Madison RapidRide project got in design, the fewer planned blocks for Union Street were included.

The last update to the design (the project is still waiting on federal dollars to move forward) only included a (mostly) protected bike lane on the immediate blocks surrounding 12th Ave, with riders needing to use the sidewalks to navigate the intersection of 12th Ave itself. Any additional protected bike lanes could still happen, SDOT said at the time, but they would have to come from bicycle master plan funding. It appears those additional bike lanes are coming, but in lackluster fashion.

When asked why the protected bike lane does not continue through 23rd Ave, SDOT spokesperson Ethan Bergerson said:

To fit a PBL through this section, we’d need to remove a vehicle travel lane in each direction. Condensing vehicles into a single lane would not only create slow downs for vehicles, it would also create a safety concern for pedestrians. Our traffic data shows a heavy amount of right turns at the 23rd Ave and Union St intersection, which means that removing a vehicle lane would increase the vehicle and pedestrian conflict.

People biking would have the option to get through the intersection by crossing in the marked shared lane or using the sidewalk. We understand that bikes using the sidewalk is not always optimal, however, developments on both sides of 23rd Ave are expanding the sidewalks providing some relief. We’re also considering a leading pedestrian interval at the intersection that gives people biking and walking time to enter the crosswalk before people driving get a green light to turn. At this phase, the design is still conceptual, and we can consider modifications.

If SDOT is truly using pedestrian safety as an argument against the full bicycle connection in the corridor, that is really unfortunate: the bicycle facilities should be an opportunity to decrease danger to pedestrians from turning vehicles by separating the turning phases. It sounds like the department has concluded that 23rd & Union, like so many intersections in Seattle, doesn’t have room to do that. If you wonder if the the status quo is working, in the past 10 years, there have been three pedestrian-involved collisions at 23rd and Union.

And as to why the protected lane could not fully connect to MLK Way, SDOT had this to say:

The current design for the eastbound bike lane does not continue past 26th Ave to MLK Jr Way S due to similar space challenges. E Union St narrows from 50 feet wide to 42 feet wide at 26th Ave. To continue the protected bike lane eastward downhill requires removing all on-street parking on the south side of E Union St. This area has lower vehicle volumes and high parking use, so maintaining parking and only installing a protected bike lane on the uphill side could be a potential compromise.

The project website touts that “this project will minimize impacts to parking spaces on E Union St” and that King County Metro will be consolidating bus stops on E Union for Route 2 (which stops are not yet known) and that “the stop consolidation plus the relocation of a school bus zone will increase parking alone E Union St.” Increased parking: just what you’d expect from a bicycle safety project.

As to what the design for the PBL would look like at the few remaining bus stops after stop consolidation, SDOT says: “Currently, we’re considering the standard design where the bicycle lane protection is dropped at bus stops and the area is marked as a mixing zone. This design has been used on multiple PBL projects throughout the city.” In other words, even in the segment where PBL riders are not forced to mix with general traffic there will be bus stops where they will mix with a fairly frequent bus route.

SDOT does not list collision data on its website for this segment, but over the past 10 years there were 18 collisions along the project corridor (from 14th to MLK) that involved people biking, with the blocks between 20th and 22nd (where the proposed bike lane will end) being a hotspot. There were also 23 pedestrian-involved collisions along the corridor.

It must be noted that the bike “facility” that SDOT shows the Union Street project connecting to on MLK Jr Way is actually an 11-foot parking lane with no bicycle markings that the Seattle Police Department refuses to acknowledge as a bike lane and which is in no way up to NACTO standards. To get a feel of how it’s like to “use” that facility, check out this video. It also must be noted that sharrows are not bike infrastructure.

Not far from this project, another key bike segment will also stop well short of being a full connection: protected bike lanes on 12th Avenue S could bridge a gap between fair robust bicycle facilities on Broadway and the amazing Mountains-To-Sound Trail but due to traffic concerns only half of the project will be completed, south of S King Street. For that project, the chosen facility will be a two-way cycletrack which many users will likely chose not to use given the short length of the project. Another instance in which connections for all types of bicycle users are not being completed.

Project outreach for the E Union Street bike lanes is about to start in earnest, but the SDOT project lead listed is Chris Svolopoulos (chris.svolopoulos@seattle.gov).

Later this month, SDOT will be holding feedback sessions on the overall bike master plan implementation schedule. How can advocates of a complete, accessible bicycle network connecting all of Seattle’s neighborhoods even evaluate the project list when the most important pieces of projects frequently end up getting eliminated because of acquiescence to concerns around car traffic and parking? These are the questions they should have to answer for when talking about the bicycle master plan.