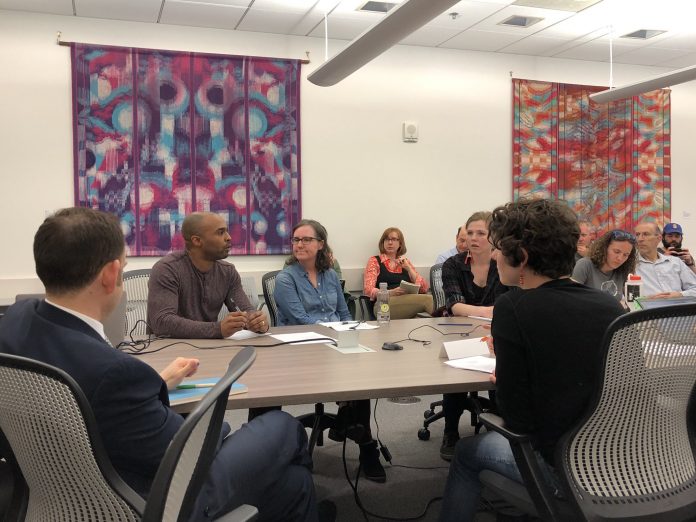 After four open houses held by the Seattle Department of Transportation (SDOT) with the Department of Neighborhoods serving as facilitators, the prevailing message from community members who attended was clear: connect the south end, and focus on safety.

Last Wednesday, the Seattle Bicycle Advisory Board got a briefing on the themes and priorities voiced by attendees at all of the “cafe conversations.” The events were focused around four questions aimed at ascertaining the values attendees wanted their transportation system to reflect and how the bicycle master plan (BMP) implementation plan fits into that. Daniel Sims from the Department of Neighborhoods told the board that the top value was, unsurprisingly, safety. Connectivity, prioritization for modes other than people driving alone, and trust in the integrity of the process around city projects followed as important values to attendees.

This is not surprising, and isn’t exactly a road map to informing how the BMP implementation plan should be changed, if at all, before it heads to the city council for approval in early June. The notable outcome of the cafe conversations was a strong prioritization from attendees at all four meetings in different quadrants of the city of infrastructure that connects the south and southeast portions of the city to the rest of Seattle.

Protected bike lanes on Beacon Avenue, facilities connecting the Duwamish valley through SoDo to Downtown, a connection between Georgetown and South Park, and on 12th Ave S connecting to Beacon Hill were all projects mentioned by the Department of Neighborhoods as coming through more than others.

This is a resounding confirmation for the priorities outlined by the bicycle advisory board, which made recommendations to SDOT that put these south-end connections at the top of their list. A protected bike lane on Airport Way/6th Avenue S or some alternate north-south route through SoDo was listed as the board’s #1 priority on a document sent to SDOT last fall. Beacon Ave S was #2 with the same prioritization score: .87 out of 1.

The Georgetown to South Park trail did make it into the draft implementation plan, but is only funded for design, not construction, and the project page lists “level of service impacts” as a risk to project completion. A protected bike lane on 12th Ave S is moving ahead this year, but with half the facility missing north of King Street and no connection to another all-ages-and-abilities facility planned.

The bike advisory board has still not received information from SDOT on exactly why the projects were not included in the plan, despite the department asking them for feedback this month on how they might like to revise the plan. SDOT Director Sam Zimbabwe has been clear in their last two meetings that any bike facilities that get added to the plan now would need to come at the expense of other projects.

We still do not know how much influence Mayor Jenny Durkan’s office had on selection of the bicycle master plan’s projects. Public disclosure requests sent to both SDOT and the Mayor’s Office have come up empty-handed in this area.

The bike advisory board’s formal response will be a letter, circulated in draft form at last week’s meeting, that pushes back on the Durkan Administration’s supposed methodology for selecting bike projects. Their strategy, outlined by Deputy Mayor Shefali Ranganathan last month, focused on connecting “nodes” and expanding the network. Instead, many of the projects are a patchwork of routes that stub-end or lead to roadways that are not ‘all ages and abilities’.

The letter makes five broad recommendations for adjustments to the plan, as follows:

“[The Seattle Bicycle Advisory Board] implores you, our political leaders, to deliver on the commitments made in numerous adopted policies, plans, including the Bicycle Master Plan, Climate Action Plan, Vision Zero, safe Routes to School Program, the Race and Social Justice Initiative, the Complete Streets Ordinance, and the Comprehensive Plan,” the letter states. “These policies, plans, and ordinances demonstrate the city’s values–safety, equity, sustainability, livability, heath, and vitality, and represent the result of countless hours of public process.”

The board appears to have a sizable segment of the city behind them in making sure that Southeast Seattle is not left out of the plan. Will that be enough to overcome the primarily political obstacles that caused that part of the city to be left out in the first place? With a city council that doesn’t appear to be showing much appetite for actually influencing SDOT project trajectory these days, this might be the only chance to make an impact.