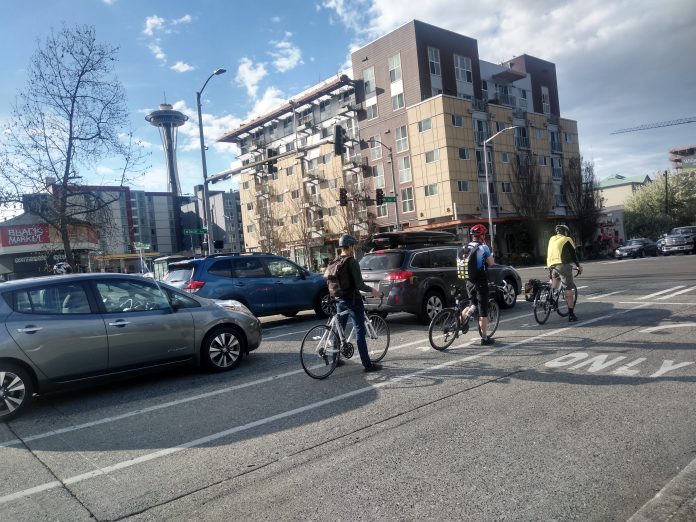 The Seattle Department of Transportation (SDOT) only plans to construct about half of the miles of protected bike lanes (PBLs) that it promised when voters approved a $930 million transportation levy in 2015, according to the Bicycle Master Plan implementation schedule released late last week. According to the plan, the department will completely stop constructing PBLs after 2021, when it has spent all of the Move Seattle Levy funds that were allocated toward them, and almost completely stop building neighborhood greenways after 2022.

The plan, which was due to city council by the end of March as laid out in a council resolution, is the first update to the implementation schedule for bicycle facilities in Seattle since 2017, and the first since last year’s “reset” examined project costs for completed bike projects and found that the original estimates were incredibly optimistic. Costs for almost all programs are coming in over estimates, as the updated workplan for every other program that was released last November outlined, but the bicycle subprogram also ended up paying for expensive street rebuilds that were required for its centerpiece projects, adding drainage and utility costs to these bike projects.

The reduced scope of the Bicycle Master Plan (BMP) subprogram means more pressure to select the most crucial projects, which will go furthest toward creating a fully connected bicycle network that everyone in Seattle has access to. But here too the plan falls short, with key network segments dropped from the plan and Southeast Seattle yet again getting left behind in terms of direct connections to other neighborhoods, particularly Downtown.

The fact that the project list went through Mayor Jenny Durkan’s office before being approved is notable, especially coming on the heels of the decision by that office to cancel a planned protected bike lane on 35th Ave NE in Wedgwood that was fully designed and ready to be put in place. That office also spent at least $14,000–money that came out of the bike budget–hiring a mediator who failed to win support for the City’s design for 35th Ave NE bike lanes by overcoming virulent neighborhood opposition, which had included death threats and the sabotage of City equipment with fireworks.

The bike lane on 35th Ave NE was part of a planned repaving project, which meant that the cost-per-mile of adding safe bicycle facilities to 35th Ave NE was way below the cost to add facilities to a street not getting repaved. Months earlier, SDOT cancelled a planned protected bike lane on N 40th St in Wallingford also being constructed as part of a planned repaving last year, with no real alternative offered for safe bicycle access in that corridor.

SDOT has grouped its bicycle projects in a new way, with “low risk” projects separated from projects that it says come with risk of delay, and the precedent from the Mayor’s office suggests that the projects with risks could also be a list of projects that get dropped from the plan if there is political pressure.

Below is a list of the protected bike lane projects that SDOT says to complete for the next few years:

If the segment isn’t listed above, there isn’t funding to complete it. The BMP update includes a list of projects that have now dropped off the implementation plan, quite a few of which have been listed as “SBAB Removed”, referring to the Seattle Bicycle Advisory Board. The board was tasked with selecting projects like the ones above, but given the funding realities not all projects that they would have liked to select were able to make the list–listing the board as the reason for their removal from the plan is an odd framing.

On top of that, there are projects that the bike board listed as priorities that are now nowhere to be seen. From the start of the project selection process, the board made it clear that they would be deliberately shying away from pure geographic equity and ensuring that Southeast Seattle gets as connected a network as it could. With that in mind they selected Beacon Avenue S and Airport Way S as projects to be funded, but when the project list came out of the other side of the Mayor’s Office those projects were no longer included.

In addition, as Erica Barnett first noted, there are several projects that appeared on the 2017 update that are completely gone from the project, like a bike lane on Vine Street in Belltown.

The workplan continues construction of neighborhood greenways, including what it calls upgrades to existing routes, with around 40 miles of greenways planned to be completed over the entire length of the levy, compared to the 60 miles promised to voters.

But these routes vary in treatment and traffic volume, leading to an inconsistent network of greenways that in most cases do not offer significant improvements over regular neighborhood streets. Stop signs added to cross streets often encourage drivers to cut through a neighborhood greenway, creating unsafe speeds and since most greenways have parking on both sides of the street, people on bikes are put in harm’s way when there is not sufficient traffic diversion. Therefore, it’s not clear why SDOT should prioritize any greenways over funding for all-ages-and-abilities cycle facilities. It’s similar to the new sidewalk program continuing to invest in temporary pathways over permanent sidewalks.

Seattle’s bicycle facilities program has also been a victim of project delay more than most other programs, for a myriad of reasons, and the department has lost credibility with project deadlines before. The list above is ambitious even as the department falls short of overall goals. Completing projects on the pace that SDOT says they will from 2019-2021, we would likely hit our levy goals. But after 2021, funding for the Bicycle Master Plan subprogram is set to run out. This puts advocates in a better position than if the remainder of the projects were spread out over the rest of the levy: if more funding is secured, projects can get delivered after 2021.

Mayor Jenny Durkan’s 2019-2020 budget proposal included funding for Move Seattle deliverables across many subprograms: new curbs ramps, new sidewalks, sidewalk repair, and in fact allocated $1.4 million for neighborhood greenways. It would not take a large amount of funding to get the BMP program back up to a place where it could meet its original levy goal of 50 miles of protected facilities. But the Mayor’s Office has not shown any interest in shoring up funding for facilities that would keep cyclists safe, even as it is cancelling relatively low-dollar projects like 35th Ave NE. Meanwhile, the Mayor’s electric scooter safety solution has been to ban them. Still, scooter share may eventually get the greenlight in Seattle adding strain on already busy bike lanes and trail facilities.

Stopping the construction of the bike network in two years isn’t really an option for a city that is trying to create options for transportation outside of a car, reduce serious injuries and fatalities on our streets, and curb carbon emissions. All we need is political leadership to recognize that and work to fix it.