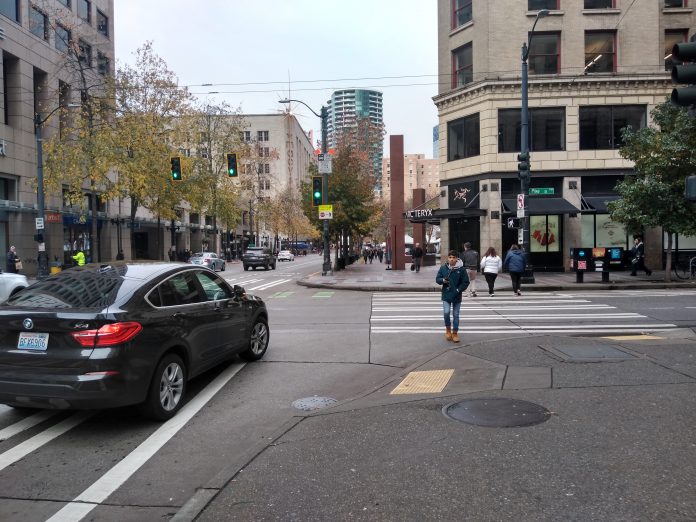 Last week, the Seattle Department of Transportation released an updated work plan for the remaining years of the Move Seattle levy: 2019-2024. In doing so, it also provides a bigger picture of work has already been completed so far than we have seen yet.

The workplan lays out exactly how far behind the original projected plans several key components are, but programs where SDOT says it’s on track might be actually be the places where the results are most worthy of scrutiny.

The levy commitment of making comprehensive safety improvements to 12 to 15 corridors is on track, according to SDOT. 10 corridors have already been completed, according to the workplan, but there’s a piece missing: what is actually done to improve safety, and what the outcomes of that work are.

The standout example of this is the inclusion of 23rd/24th Ave E (Phase 3) in the completed projects list. The changes made to this street were minimal--no speed limit reduction occurred, no additional pedestrian crossings were added, and the only lane reconfiguration that occurred was the replacement of one travel lane out of four with a turn lane. (We wrote about the design at length here.) Is that a “vision zero” corridor? Apparently.

Also included are “CBD Safety” improvements: these are signal timing changes that were made to 4th Avenue downtown in advance of the “Period of Maximum Constraint.”  And here too there are problems. Where 4th meets a one-way heading east the signal has been changed to a “permissive-protected” phase that provides a green arrow after the pedestrian walk signal has ended which allows the turn lane (which is also a bus lane on 4th) to clear of vehicles. But because there’s not a dedicated walk phase separate from the green light, opportunity for conflicts between drivers and pedestrians are still present.

We don’t know what impact, if any, these on-the-margin efforts to improve safety without inconveniencing any drivers will have. The 2017 data on serious injuries and fatalities, finally released this week, give us an idea of the direction that we’re heading.

The yearly data suggest that when the trendline should be heading down to meet our 2030 goal of near-zero traffic fatalities and serious injuries, it is actually stagnating. But even as Seattle’s population is increasing, total collisions are going down: but not for people who are walking.

The $28 million that will be invested over the life of the levy in these corridors could have a real impact, but it will take real leadership to ensure that those dollars are fully invested in improvements that make a difference.

The bicycle master plan component of the levy is famously running over budget, with flagship downtown bike network components running into unexpected utility work and requiring expensive traffic signal upgrades. (These signals protected pedestrians from turning vehicles also so in a way they are the true Vision Zero corridors in the levy.)

To date, less than 10 miles of protected bike lanes of the 50 promised and 12.5 miles of neighborhood greenways of the 60 promised in the levy have been constructed, and SDOT believes they can only complete 50-55 additional miles of those two facility types combined with remaining funds. Bike master plan funding is expected to go off a cliff after 2021.

SDOT is working on a project list for the remainder of the levy in conjunction with city council, the mayor’s office, and the bicycle advisory board, so we don’t know exactly what components will be completed with the limited funds available. What is clear is that in an environment where bike projects are getting cancelled left and right for political reasons, hitting the original levy goal is not happening. It appears the best we can do now is ensure that the projects that do get selected are high-quality catalyst projects that ensure there is momentum to find additional revenue to continue to build out the bike network.

The new sidewalk program, which was bumped from 150 to 250 blocks of new sidewalks with the intention of utilizing new strategies to install lower-cost pathways on non-arterials, is on track to hit that target, particularly with the help of additional dollars like the ones allocated in Jenny Durkan’s 2019-2020 budget. But the mix of traditional sidewalks on arterials to low-cost ones on non-arterials reflects escalating costs: 120.5 of the 250 blocks are now planned as traditional and the remaining 129.5 will be lower cost.

The question is how long these low-cost treatments on non-arterials will last compared to traditional sidewalk installation. In many cases these “sidewalks” take the form of a wheel stop separating a walking path that is either directly on the road surface or on an existing low-quality sidewalk that previously offered no separation from traffic. Is that what was envisioned when “new sidewalks” are what was promised voters?

With only 10.5 blocks of permanent sidewalk installed in Southeast Seattle by the end of the levy, the new sidewalk program on paper is on track but in spirit appears to be coming up short.

We now have official confirmation that Move Seattle will only be able to build four of the seven RapidRide corridors that were originally planned: Madison, Roosevelt, Delridge, and Rainier. Routes 40, 44, and 48 will only include speed and reliability improvements, to be determined at a later date.

But even Madison, which has been in planning the longest and is the most expensive planned of the seven, has not secured its full funding. Lack of expected grants coming through for Madison could throw the entire transit corridor back into uncertainty, but matching dollars for Delridge and Rainier have been budgeted by King County and are considered much more reliable at this stage.

The updated workplan went before the city council’s transportation committee this week, but it’s unclear if there will be any specific direction taken by the city’s legislative branch to shape the project lists now that SDOT has its roadmap. The oversight board, which gets more into the specifics than the city council can, will not be meeting again on the plan until early February.