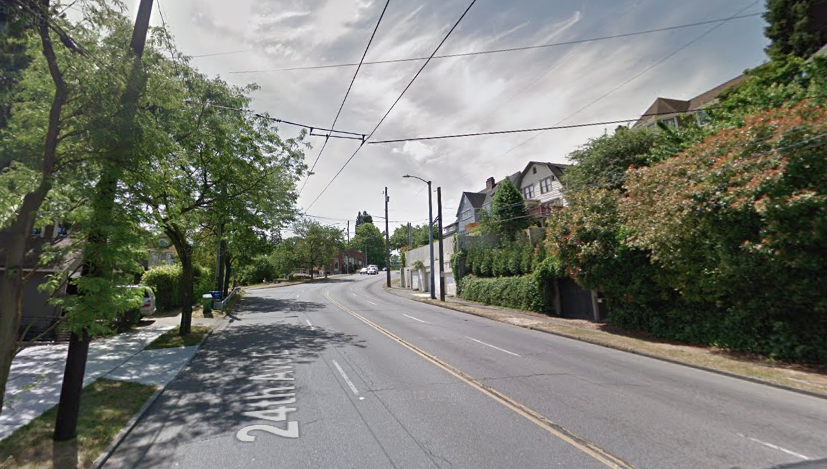 After years of disruption on 23rd Avenue through the Central Area, Seattle Department of Transportation (SDOT) is finally wrapping up construction on the street and moving on to the second phase of the project in Leschi. The corridor improvements themselves have been transformative by creating a safer, multi-modal street. In the Central Area, the street now features wider sidewalks with planter strips, fewer through lanes, transit priority for Metro buses, and additional turn pockets. SDOT plans to roll out similar improvements in the second phase, but things aren’t looking as good for the third phase in the northern segment of 23rd Avenue where the street turns into 24th Avenue through Montlake.

Last week, SDOT released updated plans for the stretch between E John St and E Roanoke St, the third and final phase. Traffic on this segment is much higher than elsewhere along the street, with 21,000 cars on an average weekday using the street in Montlake, according to the 2016 traffic volume data. (South of Jackson Street fewer than 10,000 cars per day use the street.) The street is very dangerous with fast moving traffic since motorists fly down the hill toward the bridge. The wideness of the street encourages speeding on the flat sections, despite the fact that there are some strong jogs and bends in the street with buildings and bushes close to the street.

Over the past seven years, SDOT reports 60 collisions on the corridor, including 49 just within the stretch between Boyer Ave E and E Roanoke St. Fifteen percent of drivers heading northbound at E Prospect St were clocked going at least 42 miles per hour, a full 12 miles per hour over the posted speed limit. Such a high 85th percentile speed suggests many more motorists were speeding, though less severely. Even speeding at 35 miles per hour present a problem on a heavily foot-trafficked street. The survival rates for pedestrians struck by motorists going 35 mile per hour are much lower than at 25 miles per hour. If we don’t bring down speeds, pedestrians will bear the risk; some will likely die.

Unlike with the other segments of 23rd, this segment is being presented first and foremost as a Vision Zero project, but none of the proposed components actually suggest that safety will be substantially improved.

From E John St to Boyer Ave E, SDOT is proposing a modest rechannelization that would cover the street configuration from two driving lanes in each direction to two driving lanes in the southbound direction, a turn pocket, and one northbound driving lane. A safer street design would simply eliminate the extra northbound lane converting it to on-street parking, protected bike lane, or transit lanes. The original plan had been to make provide transit lanes as part of the redesign, but according to SDOT community feedback led to the bus lane being pulled out of the plan despite the severe pinch it can create for Routes 43 and 48 in speed and reliability. Route 48 is slated for a RapidRide upgrade in 2024 (rumored Move Seattle “reset” notwithstanding) and reserving a segment of the street for transit would be a forward thinking way to plan for that project. Instead, because of a few dozen responses to a questionnaire, we will be caving on transit. But that’s not all.

On the segment north of Boyer Ave E, nothing will be changed about the street whatsoever. At E Louisa St, there have been 37 collisions in the seven-year period that SDOT examined for their outreach materials, but the street will be kept as-is, with two fast-moving traffic lanes in each direction. The primary reason for this decision is the impending makeover for Montlake Boulevard as part of SR-520. Construction on the Montlake Interchange reconfiguration is slated to begin in the fall and continue through 2022 or 2023. With the state transportation department being allowed to construct highway-style infrastructure on our city streets, it isn’t much of a surprise that SDOT is assuming that vehicle volumes will be too high to warrant lane reductions. In addition, the local Montlake business community has stated a preference to retain existing on-street parking for the small section that has it.

In a bizarre move, SDOT will add skid-resistant surface treatments at three intersections along the corridor. Because why prevent collisions in the first place when you can keep traffic moving and just make cleanup a little bit easier?

SDOT noted in its outreach that the few people who did answer their survey said that reducing speeding is their top concern. With such minimal changes to the roadway design, it’s unlikely that SDOT will even succeed at that task. 23rd is almost impossible to cross on foot or bike at an unmarked crosswalk, of which there are dozens along the corridor. SDOT is considering adding one additional traffic signal to help people cross, but has not yet decided where that will be.

Wrapping up a corridor project on one of the busiest and least safe streets in the city that leaves pedestrians and transit behind and fails to genuinely enhance safety for all is a massive departure to the promise that SDOT has made to the community. Unfortunately, it seems likely that this trend will continue for the foreseeable future. Whether the mayor’s office is actively involved in the citywide attacks on transit, safety, and multimodal mobility or is simply allowing SDOT to cave to community pressure by not providing any support remains to be seen. For the time being the outcome is the same.