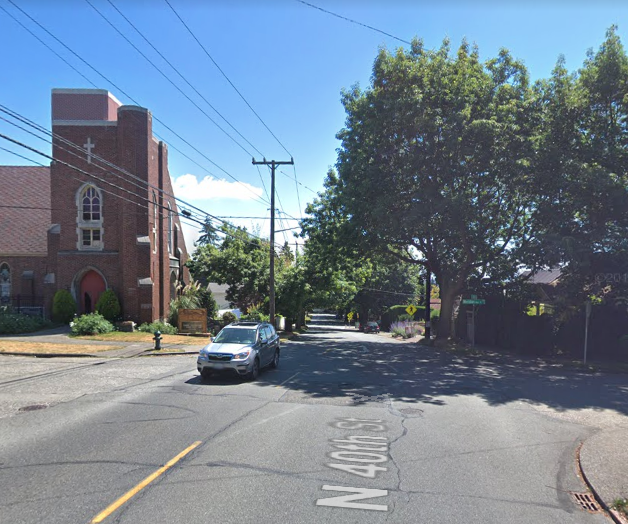 The Seattle Department of Transportation (SDOT) has been planning a set of repaving projects in the Green Lake area for around two years now. We first wrote about them in April of last year, when the department released initial plans that added bicycle facilities to a few key routes as a part of the repaving process–this saves money in a bike budget that is currently strapped for cash.

N 40th St is a high-speed 30 mph arterial with few pedestrian crossings and street parking on both sides of the street, obscuring sight lines. Low bicycle traffic currently on the street is not surprising given these factors, but the street could provide a direct connection across Wallingford over I-5 where one does not exist currently.

As part of repaving, SDOT proposed eliminating street parking on one side of the street and adding a protected bike lane in the uphill direction only. People on bikes riding downhill would continue to need to ride in traffic. Wallingford Ave N would be the point at which the bike lane switches to the other side of the street.

To be clear: this is not an all-ages and abilities enhancement to the street, but would provide a limited amount of protection for people on bikes, and the complimentary reduction in travel lane widths would also slow traffic and make it easier for pedestrians to cross N 40th St at unmarked crosswalks. Last year, an employee at a cafe on N 40th St was hit by a car crossing the street, and was seriously injured and out of work for many weeks. Slower traffic translates to fewer injuries when collisions occur.

But even this basic bike facility, on one side only to preserve a lane of parking, has now been removed from the plans for repaving on N 40th St, with a statement on the SDOT page for the project reading:

Our original design for improvements on N 40th St responded to public feedback expressing the need for improved east-west bike connections through Wallingford. However, during our recent outreach, we heard concerns about our plans to add a protected bike lane on 40th, from nearby neighbors and businesses, as well as from people who bike through the area. Given these concerns, and existing east-west bike infrastructure already in the area (via the Burke-Gilman Trail and the Neighborhood Greenway on N 44th St), we’re taking a step back to reconsider the design for bike improvements in this area. In the coming months, we’ll evaluate other potential improvements to east-west bike connections in Wallingford. We plan to share these alternatives with the community for feedback early next year.

N 40th St is now the latest bicycle and pedestrian safety project to get terminated or dramatically rolled back under the Durkan Administration. With bike facilities not included in most of the repaving plan for N 50th St either, the chance to improve safety at the same time that we perform street maintenance is being left behind in an attempt to preserve both on-street parking and the ability to drive through residential neighborhoods at high speeds. With no one in city government to back up infrastructure improvements, it’s not surprising that they are getting removed.