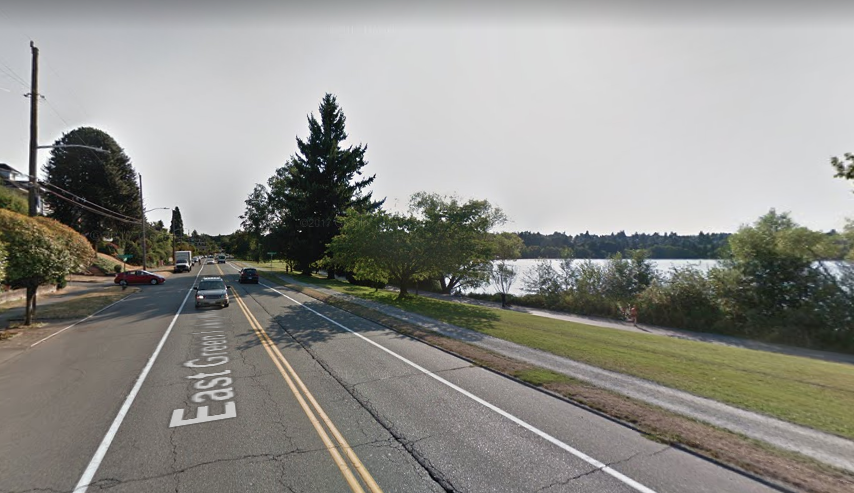 Spot improvements could involve reconstruction and repair of sidewalks, new pedestrian crossings, relocation of bus stops and new transit islands for boarding, new traffic signals, and upgraded and new curb ramps. Bike lanes will also be enhanced and installed throughout the paving project corridors. In some cases, SDOT will remove some on-street parking to facilitate the street improvements. 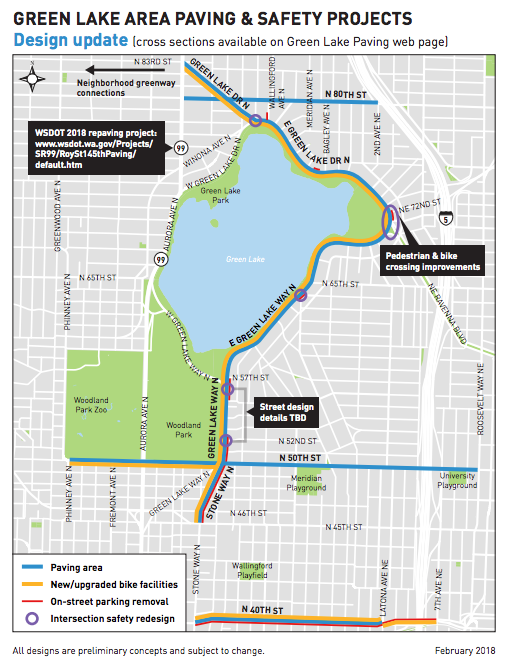 Five intersections along Green Lake Way N and Green Lake Dr N are planned for major redesigns. SDOT has not yet released specific plans on what that may look like, but the intersection at NE Ravenna Blvd and NE 71st St will likely be the most prominent intersection redesign. Anyone who has visited the heart of Green Lake can attest to the busyness and complex nature of the intersection. In recent years, SDOT has tried to simplify the intersection by adding a curb bulb on NE 71st St to control vehicle movements and make pedestrian crossings easier. 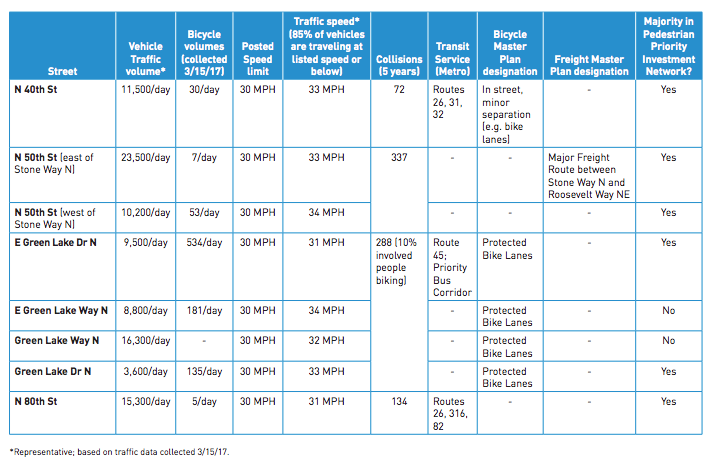 In considering redesigns for streets, SDOT looked at background data on traffic volumes, speeds, and collisions. Transportation planners also looked at established policy documents for guidance on future street functions under the Bicycle Master Plan, Freight Master Plan, and Pedestrian Master Plan’s Priority Investment Network, and also paid special attention to streets with transit service. Noticeable in the data is that N 50th St east of Stone Way carries the most vehicles of any studied corridor and has a comparatively high number of collisions even accounting for other factors. Presumably, the collision rate is a mix of traffic volumes, higher speeds, somewhat poor visibility at key intersections, and four-lane wide street sections with no center turn lanes.

The different segments of the proposals are below, with the current street configuration compared to the post-repaving version as proposed.

SDOT has whittled down its redesign plans for each of the four corridors, providing section profiles for 10 segments in total. All of the redesigns will include improved bike facilities in some way and could result in substantial street reconfigurations. Several street segments, however, will not see any redesign. N 80th St and N 50th St east of Stone Way N aren’t slated for changes beyond new surfacing. N 80th Street currently sees fewer than 10 people biking along it per day, as does that segment of N 50th Street.

This area includes the intersection voted Seattle’s Worst in 2016: Stone Way, 50th, and Green Lake Way. This is the perfect time to redesign that oversized interchange into something more safe and pedestrian-friendly: with a protected bike lane going through this intersection on Stone Way and Green Lake Drive, it will be really important to get that dangerous intersection’s redesign correct.

In the coming months, SDOT will continue to complete design work for the street layout changes and improvements. Implementation will begin next year. Folding safety improvements, including the addition of or improvements to bicycle facilities as directed by the bike master plan, in with planned repaving projects is a cost-effective way to plan projects, and also reduces headaches to neighborhoods around construction.

However, because in many cases these projects are not as long-awaited as others that advocates have been pushing for, there is not a built-in constituency ready to fight for them if any aspects of the plan come into question, as often happens when on-street parking is traded for mobility improvements. 35th Ave NE is the most recent example of where this has happened, but protected bike lanes accompanying another planned 2018 repaving along Wilson Ave S in Seward Park are also being questioned. If you do support these complete streets improvements, let SDOT know now by emailing greenlakepaving@seattle.gov.