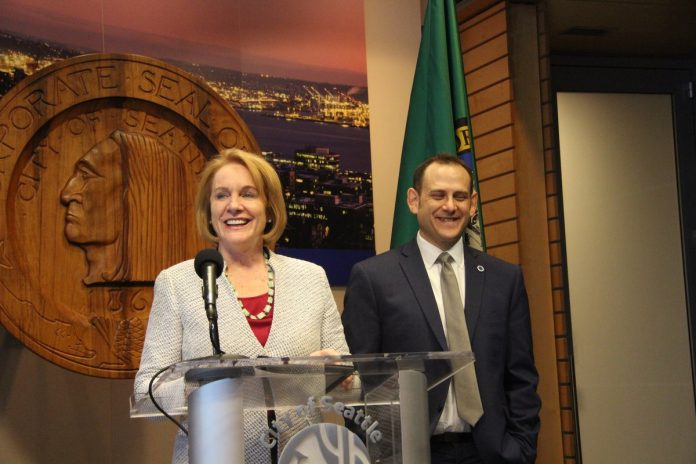 The decision to cancel a planned protected bike lane on 35th Avenue NE, in the heart of Wedgwood’s business district, and instead paint a center turn lane is being made worse by the fact that the Seattle Department of Transportation (SDOT) seems determined to convince the public that the decision was made with safety in mind. Anyone paying attention to the process knows that this is not the case, and doing so risks the credibility of the brand new head of the department.

SDOT Director Samuel Zimbabwe had been on the job for less than a month before being sent into the middle of a street fight in Wedgwood. But it has long been public knowledge that the decision to back off protected bike lanes, which were in the completed design through the point where the project went out to bid, was squarely with Mayor Jenny Durkan’s office. Taking the unprecedented step of asking the department to halt the project before the final striping that would have added the bike lane went in so that a secret mediation process could continue to turn the issue into a political one.

Not even support from District 4 Councilmember Rob Johnson for a safer 35th Avenue NE was enough to see the project to fruition. He wrote in a blog post more than a year ago: “Ultimately, I still believe that the proposed changes will result in a safer corridor for everyone traveling through the neighborhood and will help allow more people to choose to walk or bike, which we need to meet climate change objectives and ease traffic congestion.” The mayor had backup from other elected leaders to continue with the project and still folded.

But the Mayor’s Office was not the bearer of bad news on Tuesday when the announcement was made, as Director Zimbabwe met with proponents for the approved design and then released a blog post titled “35TH AVE NE PROJECT: Safety for all in NE Seattle.” It was clear that they would be starting with the end result and working backwards from there, producing reasons that the design had been chosen.

The problem is that the final design chosen, replacing the space for protected bike lanes with a center turn lane, did not originate within SDOT, but rather came from the opponents of the bike lane. The fact that it did not actually add any on-street parking back to 35th Avenue NE was puzzling to many, given the focus on parking for business access. However, to call the design a “compromise” is misleading as a safe place to bike was essentially the only thing that the safety proponents were requesting.

Ironically, one of the few things that the two sides could agree to in mediation was the fact that the speed limit on the street should be lowered to 25 mph–something which SDOT has not committed to doing, saying they will evaluate the street for lower speeds after the design changes have been implemented.

Now, SDOT’s talking points include the fact that the protected bike lane conflicted with the Transit Master Plan, even though the design that went out to bid was also consistent with operating buses through the corridor. There is no mention of the fact that the new design moves the lane of southbound travel directly next to the curb, which will dramatically impact the pedestrian experience for people walking to places like the busy Northeast branch library. And we have the SDOT director telling Safe 35th advocates at their meeting Tuesday that the new lane configuration will allow people biking on 35th Avenue NE to “take the lane,” according to multiple reports.

Also unaddressed is the impact that increased lane widths will have on vehicle speeds, with the general purpose lanes north of NE 85th St getting bumped up from 11 feet to 12 feet, highway-sized lanes. Between NE 85th St and NE 65th St, lanes are getting bumped from 10.5 feet to 11 feet. Wider lanes lead to higher speeds, but we are being asked to believe that the proposed design is exactly the same as the original in terms of safety.

Even more dismaying, perhaps, were comments that Mr. Zimbabwe made to Michelle Baruchman of The Seattle Times that “all streets can’t do all things for all people” when referring to the modal master plans that lay out plans for specific streets to become key corridors in a citywide network that allows people to safely get around our city without a car. Seattle has seen time and time again instances where concerns around traffic and parking have won out over safety, and it doesn’t look like the new SDOT director views the issue any differently than it has been approached in the past.

Both sides are seeing the response to 35th Avenue NE as taking on an oversized importance around the issue of bicycle and pedestrian safety. The response from the Seattle Department of Transportation shows that we may be making even less progress than we think.