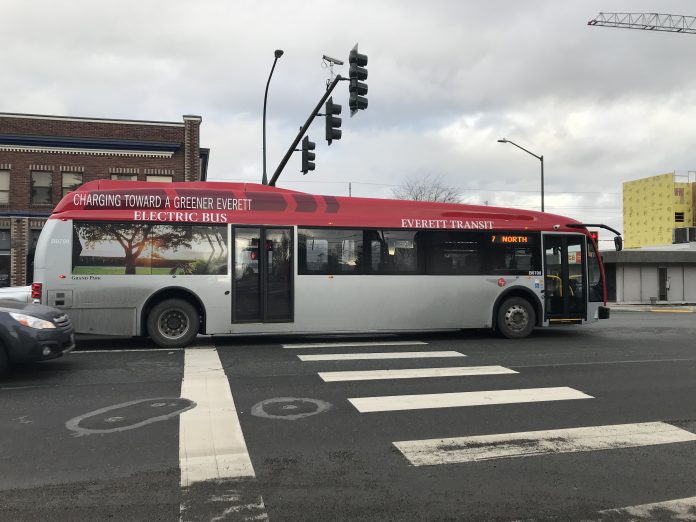 This coming Sunday, Everett Transit will roll out a major system redesign. In responding to heavy financial constraints, the transit agency will cut service by 7% and consolidate routes to operate more efficiently, albeit with less coverage. The new system will emphasize connections to the newly-opened Seaway Transit Center on the footsteps of Boeing’s Everett campus. It will also mean that direct transit service will be provided to the new Paine Field Airport passenger terminal, making it easier for locals to access the airport by transit.

The service change will come into effect this Sunday, March 31st. Everett Transit touts that the system redesign will speed up buses by 21% in the south end, largely due to more direct routes operating on major arterials in a bidirectional fashion instead of on loops. This will be particularly helpful to Routes 2, 3, 8, and 12, but the transit agency has kept the vestiges of unnecessary loops and milkruns on a variety of routes, particular near the city center. Nevertheless, several routes will see overall frequency and span of service improve:

Four routes will converge on the newly-opened Seaway Transit Center, which include Routes 3, 8, 12, and 70. This will help bring locals to the major employment center at Boeing’s Everett campus and Paine Field. Community Transit launched its new Swift Green Line on Sunday, which provides high frequencies and fast service between the Seaway Transit Center and Canyon Park Park-and-Ride in Bothell. It also offers connections to other local and regional bus routes, including the Swift Blue Line. The transit center features several other services, such as Routes 105, 107, 227, 247, 270, 271, 280, 513, and 952.

While the Swift Green Line does stop at 100th St SW on Airport Rd, it does not directly serve the new Paine Field Airport Passenger terminal. Everett Transit has equipment small enough to directly enter the drop-off/pick-up loop at the terminal. Therefore, Route 8 will make a loop mid-run to serve the terminal, saving passengers a 2,000-foot walk from the Airport Rd bus stops.

Hard Choices Now and Ahead

Everett Transit has had to make hard decisions due to tight financial constraints. The transit agency has had to pay $1.5 million as part of the ORCA NextGen program, which is a lot for such a small organization. Labor, operations, and system reinvestment costs also continue to outstrip revenues from fares and a stagnate sales tax base. In fact, the transit agency is in the process of raising fares twice this year, with the first round having already been implemented and the second forthcoming in July. The fare hikes are arguably punitive with such rapid increases, but have been long-due.

Even with increased revenues, Everett Transit is resigned to a stunted and stagnating network while the city continues to grow. That may help the productivity of existing routes somewhat, but this service change will not be a panacea to demonstrate transit demand in neighborhoods hungry for service.

The only sure way to build up the local transit network is to think bigger. That could mean a partial or full merger with Community Transit. It could mean increasing the local sales tax 0.3% (the maximum increase authorized by statute), which is perhaps the most obvious choice. A menu of other options are also out there, such as expanding the Transportation Benefit District to increase investments in transit investments, using additional commercial parking taxes and on-street parking fees, imposing special taxes on services like Uber and Lyft, and raising annual business license fees on local businesses.

If no new revenues or merger materialize in the mid-term, Everett Transit will be locked into a very substandard service pattern for the foreseeable future. This service change has some things to like, but it is born out of a deeply broken system and severe lack of stewardship to serve riders well.