New York City is filing an anti-trust lawsuit against cars, on behalf of the American people.

Well, I lied. The “lawsuit” is actually a policy called congestion pricing, which charges motorists to drive into heavily trafficked areas. But I am telling the truth about the anti-trust bit. Cars do have a monopoly on our transportation system, and policies like congestion pricing can help break it up.

Just look at how we get around. According to the US Census Bureau, currently, over 91% of American households own a car, and 85% of Americans use a car to get to work. But it hasn’t always been this way. Back in the early days of industrialization, one had myriad options to get from point A to B: walking, horseback, bicycle, streetcar, and inter-city trains.

So, is it bad for one form of transportation (the automobile) to dominate the way Americans get around?

Well, yes. First, cars monopolize our streets, which are meant to be a public resource. Overwhelming private vehicle ownership requires this public resource to feel like a subsidized private road. One should feel safe walking and biking in the public realm. But, America’s ~6,000 pedestrian fatalities in 2018 indicate that our public realm is under siege, unless you travel in a private automobile.

To make our streets feel more like a public resource, inviting more people to take transit through more frequent service and bus stop amenities will decrease the need to own your own vehicle. Increasing transit use by people is also a clear winner for the environment versus the same number of people driving. More people riding transit also means better traffic flows for others who needed to drive that day. The resulting air is cleaner overall, which would help reduce respiratory diseases associated with transportation-related emissions.

We can move the greatest number of people the fastest with buses and trains while simultaneously achieving pollution/health goals. To diversify the intra- and inter-city transportation marketplace, the government must intervene so transit, cycling, and walking transportation can compete with driving.

New York City is intervening, with its congestion pricing policy that follows London’s success. Other cities are taking action as well. Cambridge, MA has spent millions of dollars to construct “bicycle highways” and even passed an ordinance making these bike highways mandatory on their streets. Measures like these illustrate financial and political commitment, which can be replicated and scaled up (or down) to your city or region.

New funding used to reconstruct streets with protected bike lanes, bus priority lanes, and trams will be a boon for competition. And competition will bring down the cost of moving around. Consider this: the annual cost of car ownership is $8,500, while the annual cost of relying on transit ($1,500) and cycling ($450) means the difference would go into your pocketbook.

There are excellent precedents in other cities and countries to improve upon. Amsterdam is a great cycling city, but we can get there quickly with quick-build cycle highways. Mayor Carlo DeMaria in Everett, Massachusetts took initiative and implemented bus priority lanes overnight, which was basically a cost-free project for its transit-time benefits. China easily has the largest high-speed rail network in the world, thanks to 15 years of heavy investment.

The United States has allowed our transportation network to become a monopoly, dominated by the automobile. But public investments should reflect the best available technology. It’s time to break up the automotive monopoly on transportation, and let cleaner, healthier, less expensive technologies take us where we need to go.

The featured image is by Scott Bonjukian. 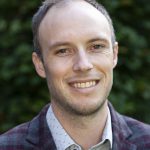 Jesse Boudart is a transportation engineer who understands how the engineering discipline influences human decisions to get around. He works at a leading multimodal planning/engineering firm called Toole Design and has published several transportation industry works in transit, walking, and cycling.