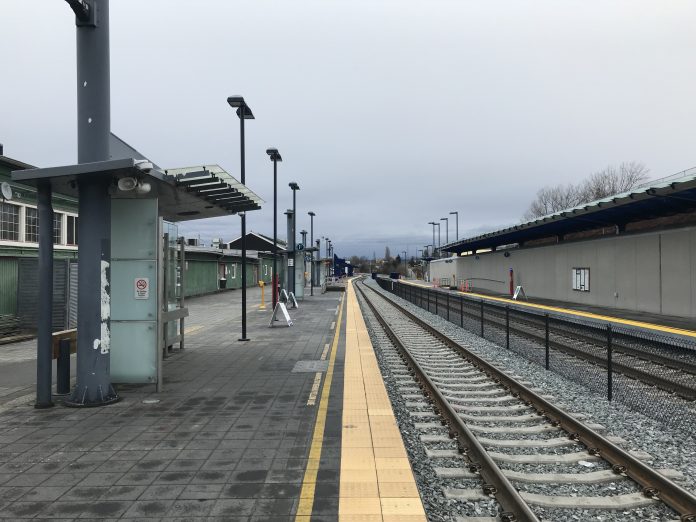 Sound Transit has started a process to plan nearly $1 billion in capital improvements for capacity expansion of the Sounder South commuter rail corridor. The initial menu of options being explored include adding more trips, expanding the period of service, increasing frequency of service, and operating bigger trains. Implementation of improvements would be deployed through 2036 on a rolling basis, culminating with an eight-mile extension and two new station openings on the corridor south of Lakewood: Tillicum and DuPont, which are funded separately to the tune of $325 million. Tracks on this section of the corridor already exist and will serve Amtrak trains beginning this winter.

Ridership on the corridor is strong with approximately 16,000 passengers each weekday, and steadily increasing. Most ridership and the highest productivity is among the early morning and evening trips in the peak-direction to and from Seattle.

Sound Transit is somewhat challenged with what can be done to expand capacity. Ownership of tracks is a primary problem since Burlington Northern Santa Fe (BNSF) owns the vast majority of the corridor between Seattle and Tacoma. Sound Transit only owns a short segment from Tacoma Dome to Lakewood that is currently operational. BNSF prioritizes its freight operations and generally runs its heaviest freight traffic during off-peak hours when Sounder is not in service. Adding service means purchasing slots for track use from BNSF and making upgrades to tracks.

Four primary options have been identified to expand capacity:

In seeking feedback on options, Sound Transit has looked into tradeoffs of competing approaches. The tradeoffs highlight three considerations: capacity and ridership, costs, and reliability.

Running trips more frequently by compressing schedules would not increase overall capacity unless more total trips are added to the schedule. In a no-new trip scenario, ridership levels might increase if off-peak trips are reduced. Adding overall trips would lend itself to overall ridership increases as capacity is expanded. However, tighter schedules could cause problems at platforms and on tracks, particularly King Street Station where things are squeezed, and risk other downstream delays across the system.

Expanding the length of trains could alleviate some of these challenges since operations would not have to change while overall capacity is increased. However, Sound Transit would still have to make capital outlays for more vehicle equipment, storage areas, and modifications to stations.

Making changes to stations could be fairly pricey and may not be possible or worthwhile at each station. Before making modifications, Sound Transit would need to analyze existing and project usage, and how targeted expansions of platforms and facilities would be beneficial to support longer trains. Having passengers enter and exit certain doors at platforms is not necessarily atypical in the railroad industry, especially when platforms are shorter than the length of trains.

A particularly sticky problem with train length, however, is King Street Station which is the center of the Sounder commuter rail system. The station is already heavily used and has pass-through rail traffic. Expanding center platforms might be expensive and infeasible in addition to overall platform access challenges with staircases, elevators, and general width.

The options to expand South Sounder are certainly compelling, yet fraught with real tradeoffs to weight in deciding how money will be divvied up. In a perfect world, passengers would probably want a mix of more trips, higher frequency, expanded service, and longer trains to the maximum extent possible. But Sound Transit will have to be choosy in how to fill those buckets, which is why feedback from the public on priorities is incredibly valuable so that transit agency can try to meet the highest priorities among the public.

Not mentioned in the options, however, are other ways to expand capacity. A virtually free way to buy more seats is through the Rail Plus program, which allows ORCA cardholders to reserve open seats on select Amtrak Cascades trains. So far, this is only available on the Sounder North corridor for a very limited number of trips. Cascades regularly has open seats, particularly during off-peak time periods. Expanding the program between Seattle and Tacoma would allow passengers to ride these trains for the normal ORCA cost at Tacoma (eventually Tacoma Dome Station), Tukwila, and King Street Station.

Sound Transit could also deploy diesel multiple units to run extra service between Lakewood and Tacoma Dome Station, where the transit agency already owns tracks, and eventually expand this DuPont for only the cost of equipment, storage, and operations instead of paying BNSF for more slots. Another option could be to through-routing to extend service toward Ballard and adding up to four new stations.

In the next few years, Sound Transit will be rolling out a variety of station access improvements, which should help more people access existing and future service. These include new walking, biking, and parking facilities for Kent, Auburn, Sumner, and Puyallup, which are due for completion by 2023. A total of 2,230 additional parking spaces will be spread across the four station locations.

An online survey for priorities in capital investments for the Sounder South commuter line is open through the end of today.

We are in the midst of our fall subscriber drive, please consider becoming a monthly donor.