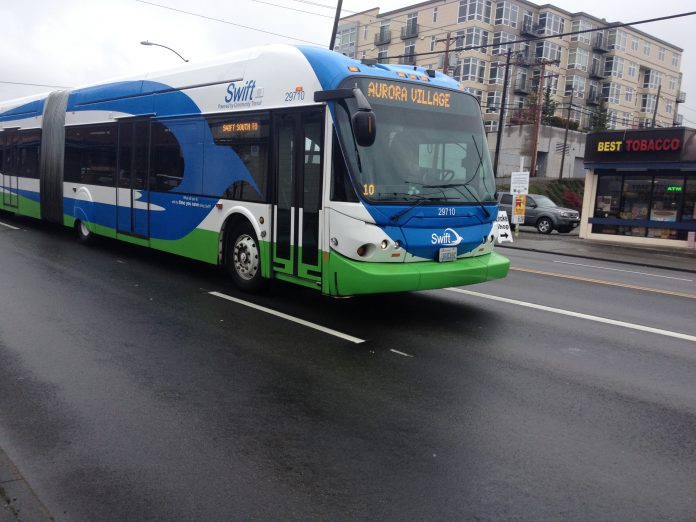 Community Transit is beginning to tip its hat on things to come as light rail opening in Lynnwood approaches in 2024. Last week, the transit agency published its six-year transit development plan, which spans the same time period. The plan envisions expansion of the Swift bus rapid transit network, redeployment of commuter bus service hours into local service, and ridership growing from 10.6 million in 2018 to 14.4 million in 2024, a 36% increase.

Early concepts for service growth through 2024 are as follows:

In 2024, light rail will be an integral part of Community Transit’s Snohomish County network and buses will no longer need to run deep across the county line. A priority for the transit agency is to expand the Swift bus rapid transit network. Two expansions of that network are planned with the rollout of the Swift Orange Line and extension of the Swift Blue Line.

The Swift Orange Line is planned to primarily run along 196th St SW and 164th St SW/SE to connect Edmonds Community College, Lynnwood City Center Station, Ash Way, Mill Creek Town Center, and McCollum Park. The line will operate on an 11.3-mile long corridor with 15 stops. Service hours to operate the line will be fairly consequential with 42,500 annual service hours dedicated to it, which accounts for virtually all new service hours in 2024.

Community Transit expects that project will top $85 million to realize with funding going toward planning, design, bus acquisition, transit priority improvements, and construction of stations. Funding has been tentatively identified as follows:

The Swift Blue Line extension is fairly short at 1.8 miles. It will continue further south on SR-99 from its current terminus at Aurora Village to N 185th St and then proceeding along the street toward I-5 to reach new N 185 Street Link light rail station in Shoreline. Community Transit estimates that this extension will cost approximately $15 million and involve the construction of six new stops, transit priority improvements, and acquisition of five new Swift buses. The cost estimate assumes that $10 million will be made available through state grants and another $5 million in local funding.

To facilitate this kind of growth, the plan calls for increasing bus base capacity and adding new buses to the fleet. Community Transit is already undergoing a multi-year process to expand bus base capacity that is expected to cost about $70 million. The process will run through 2025 to allow for staffing capacity, maintenance, and storage.

Through 2024, Community Transit expects to replace 107 buses to maintain the fleet. Most of these will be 40-foot buses, but sizeable shares will also be in the 60-foot, double-decker, and Swift categories. Expansion of the fleet will include 13 40-foot buses and 21 Swift buses, an increase of 34 buses in total.