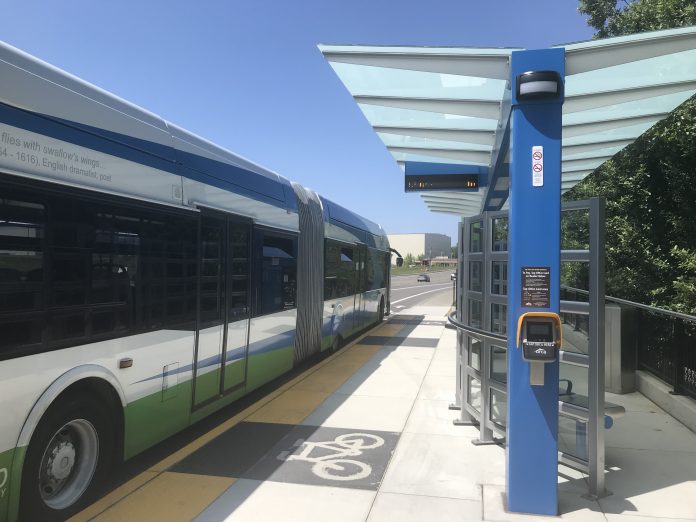 It’s been well known for awhile that Community Transit plans to expand the Swift network further by 2024 to complement opening of the Lynnwood Link extension and I-405 and SR-522 bus rapid transit (Stride). That said, how the overall network might be shuffled around for local and commuter service has been less clear. Recently, Community Transit announced that the transit agency is currently evaluating what an overhaul of the full bus network will look like once the light rail extension is open at a briefing to the Snohomish County Council on service planning.

The 2024 concepts indicate that the local bus network will grow and improve service to Snohomish County communities with more frequency, coverage, and span of service due to saved service hours from truncating and eliminating commuter routes and increasing revenues. Much of the service planning emphasis will be on how to get bus riders to and from light rail and Sound Transit’s forthcoming Stride service. Community Transit’s own bus rapid transit lines (Swift) will continue to be major workhouses to do this work with the addition of a new Orange Line between McCollum Park Park-and-Ride and Edmonds Community College as well as an extended Blue Line southward to the NE 185th St light rail station in Shoreline. Community Transit will also look at how other first- and last-mile mobility options could factor into connecting local riders with several major transit centers near the county line.

Level of Service to Grow

Annual service hours stand at about 450,000 right now, which made about a 10% year-over-year jump, primarily due to the introduction of Swift Green Line service in March. That number will jump to over 600,000 in 2024. A good chunk of this will become available with saved service hours (noted in orange in the graph) of buses that currently operate on I-5.

Community Transit currently has 25 commuter routes (including six Sound Transit-branded routes) that operate between Snohomish County and King County, mostly to Downtown Seattle and University District. Buses spend much of their time stuck in congestion on I-5 and I-405 as well as deadheading (out of service trips to route terminals). The opening of light rail and Stride to Lynnwood will greatly reduce the need for commuter routes running into King County. With the new connections, the I-5 and I-405 service hours could be reinvested to more local versions of the commuter routes to reach light rail and Stride.

During the briefing, Roland Behee, a planning manager for the transit agency, said that bidirectional service on commuter routes could be added, making better use of trips. Some commuter routes might be consolidated or simply have service hours reinvested into the local network, offering more frequency, coverage, and span of service.

With extra service hours to invest in 2024, Community Transit is rethinking how local bus service could operate with concepts. During the briefing, Behee highlighted the existing network design, including local frequencies, near Lynnwood’s city center and what it could be in 2024.

In the 2024 concept, several new corridors could be served at 30-minute headways, including 68th Ave W (north of 200th St SW), 188th St SW, 176th/172nd St SW, and North Rd/Damson Rd, and east of Alderwood Mall Pkwy, SR-524 could get 10- to 15-minute service, which currently has none. Many other local corridors could get frequency upgrades, such as 44th Ave W, 196th St SW, and 36th Ave W. Similar kinds of improvements are possible across the local bus network, particularly in Southwest Snohomish County.

Looking closer into the overall bus-to-Link service concepts, Community Transit is contemplating an emphasis on connections to the light rail stations at Lynnwood Transit Center, Mountlake Terrace Transit Center, and NE 185th St. The transit agency wants to provide many neighborhoods with regular bus service within a five-minute walk to stops so that as many people as possible will have bus-to-Link access. To accomplish this, Community Transit is evaluating the following by station:

With the recent introduction of the Swift Green Line to Canyon Park Park-and-Ride and future I-405 Stride in 2024, the connection between the interstate-running bus rapid transit line and park-and-ride will be critical. Community Transit is working with Sound Transit and the Washington State Department of Transportation (WSDOT) earnestly to design this connection for the maximum benefit of bus riders.

According to Behee, funding has recently been secured from the state to move forward with a robust project that would create an inline, center-highway freeway stop for Stride, direct access ramp between the interstate and Canyon Park Park-and-Ride, and other related improvements. This would mean entirely rebuilding the pedestrian bridge system across I-405 and significant adjustments to the park-and-ride, including parking facilities. For Community Transit, this could also help provide high-occupancy vehicle and transit access to the site.

Community Transit is planning several expansions to the Swift network, some of which have already been mentioned. The transit agency has provided some more detailed information about timing, ridership, and stop locations.

The Orange Line is currently planned for revenue service in March 2023, about a year before light rail service. A total of 15 stops are anticipated for the line, serving 5,300 daily riders by 2040. Transit travel times are projected to be reduced by 27% with planned speed and reliability improvements. The line will connect the Swift Green and Blue Lines in addition to bringing riders directly to Lynnnwood Transit Center and eventually the West Alderwood Mall and Ash Way light rail stations in 2035.

Feasibility work will begin on the Swift Blue Line extension this summer, but the small extension should be ready for opening in 2024.

Looking further out, Community Transit is considering a Swift Red Line in 2027. The line would generally follow the path of Routes 201 and 202 between Smokey Point in Arlington and Everett Station via Marysville. A feasibility study is planned for the 2021-2022 timeframe with design, engineering, and construction to follow.

No timing has been given on the small Swift Green Line extension to UW Bothell.