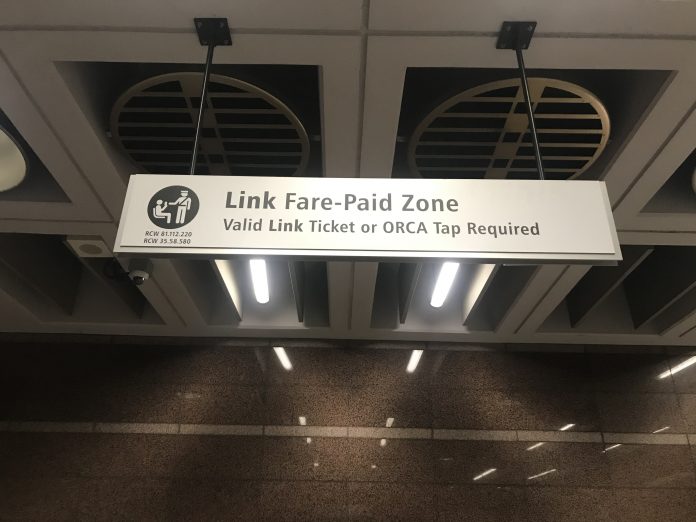 Fare enforcement policies administered by Sound Transit have only been slightly altered, albeit temporarily, despite serious concern by some Sound Transit boardmembers. A briefing the other week revealed that fare enforcement is very disproportionately hitting African American riders, adding even more concern about the process. Despite only representing 9% of system ridership, African Americans made up 21% of all riders being warned or cited for fare violations, the transit agency reported.

Sound Transit also recently came under fire when it unwittingly stuck to standard policy and administered fare enforcement on Seattle public school students during their first day of the school year. This was despite the fact that many students had not yet received their pre-paid ORCA cards and education on fare protocol. The transit agency’s insensitive social media game in response to the situation, when it was pointed out that students were being targeted by officers, only further intensified the outrage by an obviously tone-deaf decision.

Sound Transit currently operates fare enforcement on all Sounder commuter rail and Link Red Line light rail services. This is because in 2009 the Sound Transit board decided that the system should run on a proof-of-payment system. Technically, being on station platforms past certain points are fare-paid areas, meaning that riders have to tap their ORCA cards or purchase tickets before entering the fare-paid area.

The proof-of-payment system was chosen because it is comparably cheap and simple to operate rather than implementing entry and exit gates at stations. Those alternative systems (e.g., Los Angeles Metro Rail and New York City Subway) mean that the platform area has to be formally cordoned off from other portions of a station and requires ongoing monitoring to ensure riders do not hop fencing or cheat the system to enter. This is particularly difficult to administer at Sound Transit’s at-grade stations where creating barriers could be difficult without also adding barriers between the platform and tracks.

Staff from Sound Transit told boardmembers that fare enforcement is an important strategy to attain financial goals for operations. The farebox recovery targets for Sounder and Link are 23% and 40%, respectively. Sounder met the goal last year, but Link fell slightly short. Without fare enforcement, staff suggested that farebox recovery could fall as fare evasion–the practice of non-payment–would rise, putting more strain on taxpayer subsidy. While seemingly intuitive, the idea that enforcement decreases evasion enough to cover its costs hasn’t been proven in empirical studies.

Fare evasion currently remains at 2.5% of inspected riders, which is below target and something that staff indicated as a positive. The goal for Sound Transit is to keep fare evasion at or below 3%. Only a small fraction of riders caught for fare evasion end up with a citation at some point.

The fare enforcement process escalates by the number of violations committed within a rolling 12-month period. The first violation involves only a warning. A second violation will result in civil citation, which carries a $124 penalty (the penalty only covers the court costs). However, Sound Transit has temporarily suspended the practice of referring subsequent violations for criminal charges. Instead, additional $124 citations are issued for subsequent violations. The criminal charges practice is currently under review by the transit agency.

King County Metro recently updated–and is still working on forthcoming changes–to its fare enforcement process that is less harmful to riders with low-income or no income. The transit agency’s policy is far less punitive to second-time violations by allowing fines to be substantially reduced to $50 and even further reduced by half if they are paid with 30 days of citation. Alternatively, fines can be avoided if the cited rider agrees to do community service for a local nonprofit organization or enrolls in the ORCA LIFT program, if eligible. However, if a rider does not fully resolve a second offense within 90 and is then ticketed again, Metro is then authorized to suspend the rider for a full 30 days.

Fare enforcement by Sound Transit is occurring disproportionately on riders of color. Notable in the data is that African Americans are issued warnings and citations at more than twice the rate of their share in the racial ridership makeup. The transit agency reported to the board that they are pursuing more information about why this is happening. They plan to collect and evaluate data on:

Coupled with this effort is a “regional engagement strategy” that is underway. This month and the next Sound Transit will hold listening sessions with people of color and people experiencing homelessness to better understand equity issues surrounding fare enforcement. In tandem with this, the transit agency will also solicit general rider feedback online and onboard trains. In the winter, the process will move toward information evaluation, development of new fare enforcement policy options, and report with recommendations. The Sound Transit board will have an opportunity to finalize and approve procedural changes, perhaps in February.

Staff did highlight several strategies that could be used to expand access to fare media, which is a preference of the transit agency to avoid fare evasion from the start. Options that they pitched, included: new outreach to communities that often are challenging to reach, instituting a new policy to inform riders identified without fare payment about ORCA LIFT and other programs, and increasing overall participation in low-income fare programs.

Related to this were identified options to resolve fare evasion cases. Similar to Metro, Sound Transit staff outlined ways to reduce the length of time where citations accumulate (i.e., trim the look-back period down from 12 rolling months where a second and subsequent violation creates a fine penalty), reduce the cost of fines, increase the number of warnings given before issuing citations, allow violations to be resolved through community service, avoid actual fines by applying the citation cost to the rider’s ORCA card, and avoid actual fines if the rider enrolls in ORCA LIFT, if eligible.

For the part of fare enforcement officers, Sound Transit is evaluating options rethinking things like role responsibilities and priorities, inspections on certain days (e.g., the first day of the school year, severe weather conditions, and other warranted circumstances), and training. A particular emphasis for revised training could include better customer service approaches and enhanced anti-bias information.

Later this winter, it should be clearer where Sound Transit is headed with reform of its fare enforcement practices.